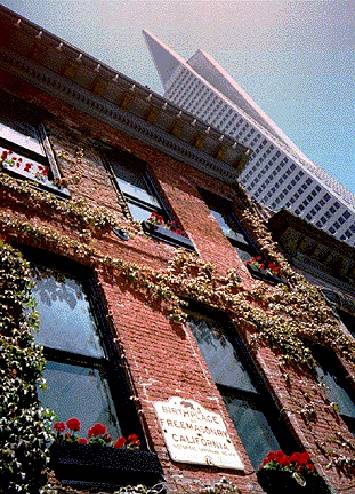 The Belli Building Annex (728 Montgomery) with the Transamerica Building behind it.

728 Montgomery Street (old Belli Building Annex). 1849. A plaque on the facade of 728 Montgomery Street commemorates that building as the birthplace of Freemasonry in California. Are the Masons just a bunch of paunchy guys who own lots of impressive real estate and get together once a year to dress up in funny hats? Conspiratologists say "no way!" The Masons, they claim, are actually a front for the Ancient and Illustrious Order of the Illuminati, an occult lodge that seeks world domination. (See Robert Anton Wilson's Illuminatus and Historical Illuminatus trilogies for details.) 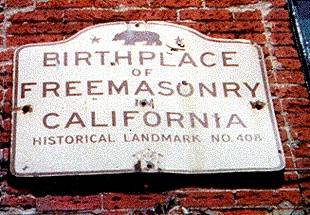 Plaque on the 728 Montgomery Street

Conspiracy buffs say that Emperor Norton, ruler of the US and Mexico, was an agent of Freemasonry. A fantasy? Maybe. But historians agree that the local Masonic lodge paid the Emperor's rent! According to Samuel Dickson, "it is generally believed that the money was contributed regularly by the Occidental Lodge of Masonry of which Norton was a respected member."

By an uncanny and yet-unexplained coincidence, it was in this same building that Bret Harte wrote his most famous novel The Luck of Roaring Camp in the 1850's. Other conspiratorial groups that have perpetrated their nefarious designs upon an unsuspecting world from the very same building include the Odd Fellows (starting in 1854), the ancient Jewish order KBS (reputed a front for the Elders of Zion), and the American Protestant Association (front group for the Protestant conspiracy to dominate world banking and finance.) The building has also housed a bathhouse, a puppet theater, a garment factory, and, most recently, offices for Melvin Belli's law firm.