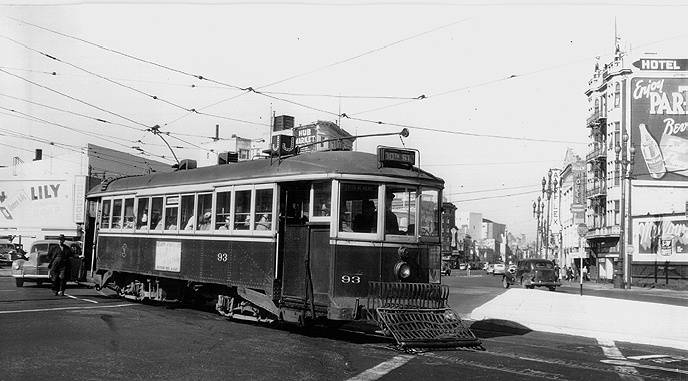 J-Church streetcar turning onto Valencia Street from Market Street in the heart of the Hub, c. 1949.

Meanwhile, other underlying issues were stirring. World War I and its aftermath changed the economic complexion of public transit operation. Nationwide, the inflation which accompanied the war, as well as growth in automobile usage and postwar recession caused tremendous financial problems for the industry. Many transit systems went into bankruptcy in this period, and the United Railroads itself was forced into reorganization in 1921, emerging as the Market Street Railway Company. In San Francisco, a densely populated city with very high ridership levels, some of the effects of the new economic circumstances of the industry took longer to be felt. Overall ridership leveled off in the mid-1920s at about 275 million revenue rides annually for Muni, the Market Street Railway, and the still-independent California Street Cable Railroad Company combined. Including transfer passengers, this equated to roughly 330 million total annual boardings for a city whose population in 1920 was 506,000, or about 50% more annual passenger boardings than today's Muni, with a population of over 700,000.

All of this was done on a nickel fare. The five-cent fare, which had been universal in the industry since its beginnings in the mid-nineteenth century, was becoming a rarity in U.S. cities by the late 1920s because of the economic squeeze on the industry. Throughout this period, though, Muni retained the five-cent fare, forcing the Market Street Railway to do the same, and therefore placing the Company in difficult circumstances. Muni also paid essentially the highest wages of any transit system in the country, thus creating constant demands for increases at the other operators. Financial analysis conducted at the time noted that the Market Street Railway was still earning an operating profit, though not paying any dividends on its common stock. However, if it were to pay wages at the higher level of the Muni system, it would have been operating unprofitably.

Another crisis loomed in the form of mass franchise expirations. Many of the Market Street Railway's franchises, giving the company a right to operate on various city streets, had been obtained by the individual predecessor companies in 1879, just in advance of the new state constitution which, it was feared, would permit the city to enact a new charter that would prove very restrictive in the matter of franchises. Since the franchises were all of a 50-year term, many were due to expire in 1929, at which point the right of the company to operate might evaporate. This created an obvious problem, since more than two-thirds of the city's ridership was still on the private system. There were numerous studies of what to do, and several attempts to issue bonds to permit the city to purchase the company; however, it proved impossible to satisfy all parties as to fair price and need, so that consolidation of the systems remained unattainable. Finally, a charter amendment was passed in 1930 which granted the company a 25-year operating permit, subject to the city's right to purchase the system at any time.

By this time, the economic pressures were more acute. Muni's ridership grew steadily from opening day until 1930, and Muni generated an operating surplus until 1929. With bond financing of capital improvements, Muni was able to provide an excellent service (informed observers are unanimous about this) on a superior physical plant. However, the combined impact of costs, stagnant ridership levels (which declined as the Depression took hold), the nickel fare and increased automobile usage (the per capita automobile registration rate in the city more than doubled in the 1920s), finally caught up with the system. Revenue flattened without a corresponding drop in operating expenses to produce the first operating deficits in 1929, 1930 and 1931. Concerned, the city contracted with the state Railroad Commission, predecessor of the California Public Utilities Commission, to conduct a study, and carried out several service changes, but in general did not undertake very significant system modifications, staying the course until, after 1935, business conditions improved slightly, permitting Muni to avoid tax support for operations.

Meanwhile, the charter of 1900 was replaced in 1932 with one which introduced some aspects of the city manager form of government. A system of appointed commissions, in which a Mayor could only appoint members when vacancies occurred, replaced the more direct political control of the 1900 charter. A new Public Utilities Commission was established to oversee the Municipal Railway, and the office of City Engineer was diminished. Issel and Cherny note that O'Shaughnessy had become de facto head of both Hetch Hetchy and the Municipal Railway. O'Shaughnessy's supporters claimed that some of the charter provisions had as their purpose deposing the city engineer, and that occurred immediately upon implementation of the new charter. O'Shaughnessy became only a consulting engineer, consulted by no one but his old friends.

The private Market Street Railway, at the same time, was heading into more and more desperate circumstances. One gets the distinct impression that the management, under the control of the Byllesby utilities management firm, was just trying to keep the system running until the city would buy the company out; but repeated attempts to do so failed at the polls. Streetcar and cable car lines were abandoned and replaced by motor buses, and patronage sagged. Finally, the company was forced to raise its fare to seven cents in 1938. The result was a significant diversion of ridership, about 20 percent, from the private system to Muni, and Municipal ridership soon rebounded, at Market Street's expense, past the pre-depression highs of 1929. Whereas it had been carrying about thirty percent of the revenue ridership in the mid-1930s, by 1939 Muni's market share was about 45 percent, and by 1944 Muni was carrying as many passengers as the once significantly larger private system.

The coming of World War II changed the situation dramatically. Transit ridership nationwide soared during the war because of gas and tire rationing, the absence of automobile production, and the accompanying dramatic economic stimulus of war spending. Ridership rose on both systems, though proportionately more on Muni. Wartime conditions on transit meant crowding and discomfort, and deferred maintenance was apparently a significant problem on the Market Street Railway. After repeated failed attempts to effect Municipalization of the private system, in May 1944 a plan was submitted to the voters in which the large operating surpluses generated by Muni during the busy war years would be used to purchase the Market Street Railway. This approach was finally approved, and in September the Market Street Railway company, corporate and operational successor to a long list of predecessor companies stretching back to the Yellow Line omnibus of 1851, finally was part of a new Muni. The five-cent Muni fare immediately went to seven cents, with universal transfer privileges now in effect between former Muni and Market street lines for the first time. The only remaining private operator, the California Street Cable Railroad Company, lost a civil judgment which caused cancellation of its insurance, and ceased operation in 1951. The company was then purchased by the city, and reopened as part of Muni in 1952, completing the final consolidation of transit under city ownership. 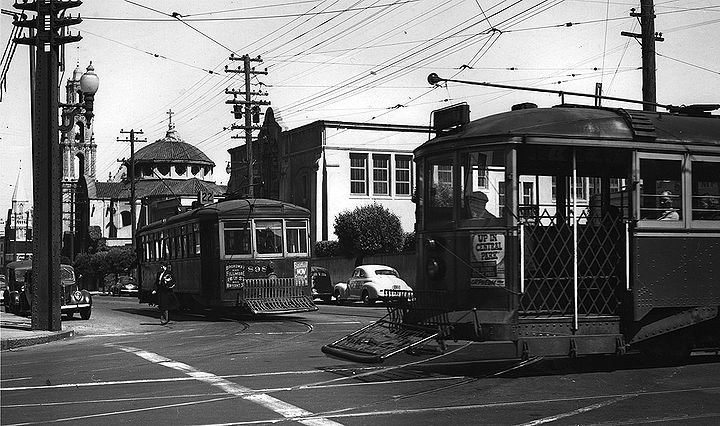 The Market Street Railway Company was clearly in bad condition when the 1944 merger occurred. There are many anecdotal references to this that still circulate, but those responsible for the combined property were quite direct. Manager of Utilities E. G. Cahill announced:

The entire former Market Street Railway of San Francisco will have to be scrapped immediately after the war ... In fact, if the war lasts too long it will scrap itself. ... It is obvious that equipment, every piece of which must be dragged off to the barns for repairs 15 times in five months is in the last stages of decrepitude. It will be a miracle if this rambling wreck of a railway can be held together for the duration.

The physical condition of the cars and coaches and of the trackage acquired was such that every effort had to be made to maintain these facilities in a condition to render service. It developed that the inventory of materials and supplies, including car and coach parts on hand for the Market Street Railway facilities were far below requirements, and in many cases were depleted entirely.

Yet the private company was a very large concern; monthly passenger revenue collected by the city almost tripled immediately, and management and operation of the combined system, largely in a state of decrepitude, was a major headache. This was in marked contrast to the smaller, older Muni of the pre-war period. When the author was employed by Muni some years ago, an older operating employee, who had been with Muni before the war, reflected wistfully on how different conditions were in the pre-war period. As an example of how tight an operation old Muni had been, he described, from the point of view of a young motorman, how Muni streetcars from the Twin Peaks Tunnel, and N and J lines, were scheduled to come inbound on Market Street in a certain scheduled progression. Muni had a full-time inspector (supervisor) at Eleventh Street, he said, where the crosstown H-Van Ness/Potrero line crossed the Market lines. If an inbound car came along out of sequence, the inspector would pull the car off Market and hold it briefly so that the following cars could be restored to their proper sequence in the rotation, and then the errant car would be put back into the line on Market Street in its proper spot in the lineup. It was vital, according to him, that the scheduled rotation be retained in order to prevent chaos at the inner terminal, the ferry loop. The day after the unified system went into operation, the San Francisco News editorialized favorably, saying:

From now forward we shall expect steady progress to be made toward modernizing and developing the service to the full extent commensurate with San Francisco's requirements. If present predictions regarding San Francisco's future are accurate we will have within few years a metropolis vastly greater in every respect than the city of today. The transportation facilities as indeed all other public utilities, must keep, pace with, nay, must anticipate that development. ... The Public Utilities Commission becomes the most important commission of city government ... not only the equipment and service must be modernized, but the organization and administration behind it must likewise be maintained at the highest level of modern efficiency ... San Francisco cannot afford to let anything stand in the way of the fulfillment of its destiny.

Unfortunately, we can see today how sadly short of that goal the city has fallen.

-- Excerpted from The Muni Paradox--A Brief Social History of the Municipal Railway by Tom Matoff, LTK Engineering Services, published in the June 1999 issue of the SPUR newsletter