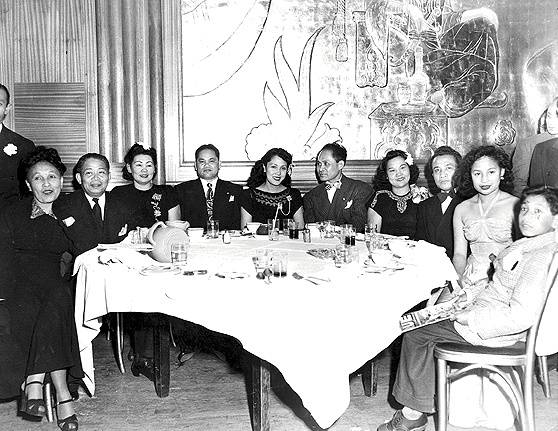 The 20 percent of early 20th century Filipino immigrants that remained in San Francisco formed a bachelor community in a 3-block radius around Kearny Street and Jackson, next to Chinatown. These "San Franciscan" Filipinos worked in restaurants as cooks and waiters and in hotels as bell-hops and "elevator boys." Others worked in the domestic service sector as house servants, cleaners, and chauffeurs. Some even started their own businesses that catered to a primarily Filipino clientele. Filipinos owned and operated pool halls, lunch counters, restaurants, coffee shops, clothing and grocery stores and gambling establishments. They had names like the "Manila Cafe," the "New Luneta Cafe," the "Bataan Lunch," the "Sampagita Restaurant," "Mango's Smoke Shop," "Blanco's Bar," and "Teno's Barber Shop."

One such business establishment was the New Luneta Cafe, located right in the middle of "Manilatown" on Jackson and Pacific. In the front it was a lunch counter that served Filipino food: chicken adobo (stew), pancit (noodles), and rice, the Filipino's staple. But behind the lunch counter was another business enterprise: tables that supported card games of rummy and poker. Gambling was one of the means by which some Filipinos supported themselves during the off-season in the San Joaquin-Sacramento farms and Alaska salmon canneries. The pool halls and lunch counters also served as information centers and mailing addresses for migrant Filipino workers. Employment opportunities were posted on chalk boards with the names, addresses, and telephone numbers of prospective employers. It was also a good source of information for finding one's relatives and friends: someone would inevitably know where a certain Filipino was living and working.

The Kearny Street Filipino community, known as "Manilatown" to its inhabitants, was a migratory community that provided temporary employment and supported Filipinos during the off-season in the farm fields and the salmon canneries. Ordinary San Franciscans avoided Manilatown, and thought that the Filipinos living there were dangerous and socially undesirable. They were described as pickpockets and "trouble-making Filipinos."

Surprisingly, the Hall of Justice and the San Francisco Police Station were located only a block away from Manilatown, but the police never shut down Manilatown's gambling operations, except for the carefully orchestrated police raids to calm the fears of City residents. Filipino business owners would be warned by the police that a raid was about to occur, and be advised to lay low. Afterwards, it was back to business as usual. At its height, over 1,000 residents, mostly Filipino bachelors, lived in San Francisco's Manilatown. The community's migrant population lived in places such as the International Hotel, the Palm Hotel and the Columbia Hotel.

This Kearny Street Filipino community lasted until the late 1950s and early 1960s when the development of San Francisco's "Financial District" increased leases and property taxes. When the International Hotel closed down in 1977, the last Filipino residents from San Francisco's Manilatown were forcibly evicted by the police--an event that made national headlines. Today, the only reminder that a once thriving Filipino community exited along Kearny Street and Jackson is an empty parking lot where the International Hotel once stood.