It is a living community. New people appear and the creek trains them to live upon it. There is literally no room to slip up. The dock is narrow and the channel’s inward and outward currents are sometimes unforgiving. Other times, it’s a piece of cake on a glassy lake—a laid-back dream. . . It’s an acquired taste to stick with an inlet that takes your house up six feet and then down six feet, twice in every twenty-four hours. . . that absorbs the effluvia of storm drains and simulates a sewer, and then two days later wins your heart back with a blue-lake duck. . .

On the last remaining sliver of water marking all that is left of Mission Creek and historic Mission Bay, a miniscule fleet of twenty houseboats lies at permanent moorings, sharing the harbor with thirty-five fishing boats and a gathering of watercraft that carry on a San Francisco tradition dating back to rowing and yachting clubs founded on Long Bridge in the 1860s. The 1973 aerial view on the next page shows the giant stub of freeway nearing completion at its break-off point.

The scope of the technologies invented in the last twenty years is matched by the extent of the bureaucracies that manage them. “If you don’t exist on paper in an Environmental Impact Report, then you just don’t exist at all,” the survey lady said cheerfully to the harbor community, who are somehow not convinced that paper has a more essential reality than people. Again and again the little community has been kicked by the unthinking foot of authority that could sink them all unless they resisted.

In 1960 the state of California moved the houseboat and boaters community out of Islais Creek Basin and gave them fifty-five permanent berths on Channel Street. Ruth Huffaker remembers the channel in 1959 when she and her husband, Steve, kept their cabin cruiser there; they built their first houseboat in 1962. “This was just like country then. We had jackrabbits and foxes. I only saw the foxes at night when their eyes flashed green in the headlight beams. The street was all cobbles.118 In the winter you had to drive all the way around because the street became a lake. There was an old fig tree and a beautiful old deserted house, completely surrounded by six-foot weeds—probably fennel and dill. There were tomatoes from some lost garden out there, and wild blackberries.

“The weeds were so tall that men made little homes in them. You never saw them; they ran if they heard you coming. You’d hear a little rustle and they would be gone. It never bothered me to walk out there. I felt safe at 2 a.m. It was the country in the middle of the city and the bums made it their own. They didn’t bother us and we didn’t bother them. They drifted off in the ’60s because the truckers and wholesalers commercialized the place on either side of the channel. Cut down the weeds. But before, in the summertime, you couldn’t see anyone walking through. You’d just discover things, like a hole in the ground with rocks around to cook on. One place had two mattresses and a coffee table. It was fascinating to me.”119

Ruth remembers building her first houseboat on weekends and vacations; she was in electronics and her late husband, Steve, was a welder. “Built our first houseboat in ’62 and four years ago we built this one. But it was the people in the harbor who really built this boat. I mean, we have carpenters and electricians down here. Everybody helped. Keith Oakford did the complete inside and didn’t charge us a dime. Isn’t that wonderful? Everybody loves Keith. This ramp will stick up in the air and I will get on the phone and say, ‘Keith, the ramp is stuck.’ He comes on over and the next time I look, it’s fixed.”

In 1969, when the Burton Act transferred the port from the state to the city, a grandfather clause required that the city provide the houseboat community with comparable berths if the occupants were forced to move. Since the amenities of Channel Street are unique, the clause seemed to guarantee a safe haven. But although this is the law, various agencies had to be reminded of its existence. 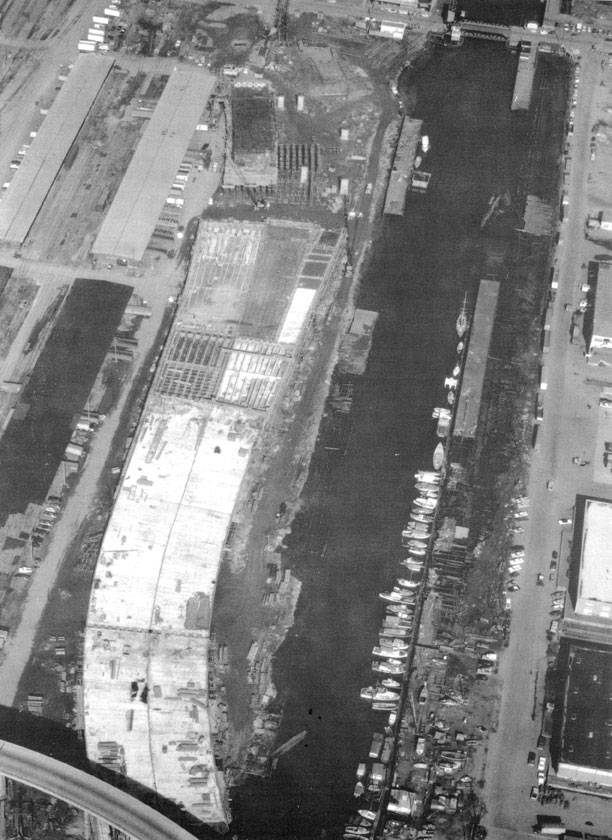 Ruth had lived on the channel for thirteen years in 1974 when Sharon Skolnick moved into the Azteca, a truncated, wooden-pyramid of a houseboat. Ruth remembers that there had been a fire in the sheds up on the opposite bank and their electricity had been cut off. “The very next day there were reporters around where the pier had been burned and I had to keep telling them to watch their step. A strange man came down and I said, ‘What are you here for?’ And he said, ‘Well, I’m from the Port, and Monday morning I’m supposed to tear this thing down. The whole thing, and put the boats in locked storage.” Sharon recalls: “The next day all the boats had eviction notices stapled on them: ‘You are hereby notified that on Monday (as of the previous month) you are evicted.’ My boss, Rose Farrington, called a TV station to say, ‘I’m a concerned citizen and I hear that they are going to evict the people on Mission Creek and I think it’s an outrage. Could you cover it?’ They were typically noncommittal, so she called another station and said, ‘Well, Channel 5 said they were going to go down and see what was up.’" 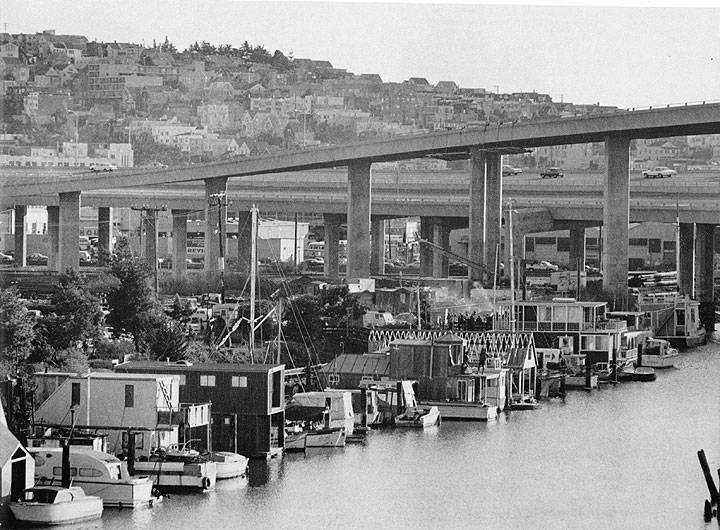 Eye-level View of the Harbor Community. c. 1982. Mostly built by hand, these modest floating houses are home to a wide variety of San Francisco professionals, artists and writers, retired people and office workers. Living close to the water under the shadow of the freeway. their important connection to a natural world is the wildlife of the waterway.

Meanwhile, Ruth called the newspapers and the TV newsmen as well. “I called Channel 7 and they didn’t know anything about it, so I said, ‘Well, I have to hang up, Channel 4’s camera just came down on the float outside.’ They decided to come right out.” Sharon’s television interview got across the idea that “this isn’t just another place to live, this is a real community. The coverage was so sympathetic that the port must have been embarrassed. They put the eviction notice on hold and they wound up building us a new float.” So in 1974 Channel Creek houseboaters won another battle to exist. The San Francisco Progress ran a headline: “Ruth Huffaker says, ‘It’s true, you can beat City Hall!’“

In July 1976 an agreement was reached among the boat owners, the San Francisco Port, Bay Conservation and Development Commission, and the Army Corps of Engineers. A lease was negotiated, the port removed the old piers and built new berths from salvaged material at a cost of about $170,000. The Mission Creek Harbor Association was formed and, in November 1977, they took on the management of the Channel Street harbor.

Ruth’s houseboat has been the association’s frequent meeting place and she confessed, “I’ve never made such good friends in my life as I have on the Channel. Everybody is so close. They help each other. It’s really fantastic. There is so little sense of neighborhood in the city and no sense of community to compare with this. We have work parties to clean up the wharf. Cook hamburgers and hotdogs on the grill up there. People make salads to feed the people who are working. And it is a reasonable place to live in the city where nothing else is. The harbor is a finite thing. We are limited to just twenty houseboat berths and thirty-five others. We pay property tax now like everybody else and I would rather be legal than have to keep looking over my shoulder to see who is coming to throw us out. I’ve chaired a lot of meetings fighting for this harbor. One thing that binds houseboat people together is fighting for our right to survive. Whatever our differences are, when we have such a common need it brings us close together. 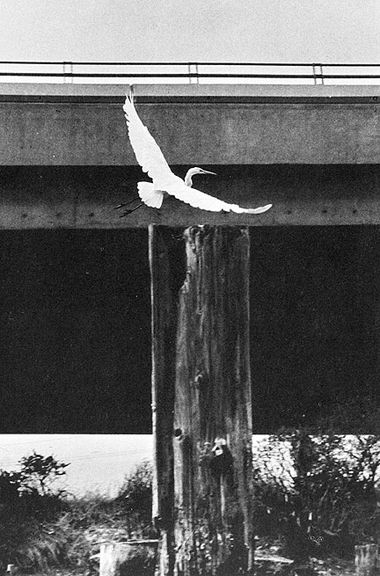 “We have all this wildlife around here. We share our boats with the birds. White egrets have had babies down here. Elusive night herons nest nearby. Harbor seals come in—not often, but it’s fun when they do. Anchovies come in and at night their scales flash with a kind of silver phosphorescence. There’s always something alive out there. Two years ago it was jack rabbits and we fed them scraps to keep them from eating our community garden.

“Actually, this is the world. As small as we are, we represent a real cross-section of America in these few boats. A couple of doctors live here, engineers, carpenters, writers and artists. Some retired people. It’s such a shame that retirees have to wind up living in flimsy trailers on paved parking lots when they could live like this.

“I’ve been on the waterways everywhere in the United States and no matter where I go, I always find a little houseboat community trying to exist, just to enjoy living so close to natural things. As they get older, it is so important for people to be connected to the natural world. Even though it’s hard to always have to deal with the elements. Still I enjoy sitting here in the morning over my cup of coffee, watching the birds preening on the pilings over there, looking at the smelt running and watching a pelican making a dive for them. Something different is happening out there all the time. Not a single weekend passes that couples don’t come knocking on my door and plead with me to find them a berth so they can live on a houseboat, too. But there are only twenty and that’s all there are. I hate to tell them that. You’d think with all the waterways around San Francisco Bay there would be enough room to give people a place to live that they could enjoy as much as we do.”120

This is chapter sixteen of "Vanished Waters: A History of San Francisco's Mission Bay" published by the Mission Creek Conservancy, and republished here with their permission.

118. Berry Street, on the north side of the channel, existed as filled land in 1877, from Third Street to the middle of Sixth, as shown on the Index Sheet of the Sanborn Insurance Map for the city. The “cobbles” referred to in this interview are basalt paving blocks. By 1878 three quarters of the city’ paving budget of over a million dollars was spent on basalt blocks. They proved to be longer-wearing than the earlier cobblestones, and their flat surfaces were kinder to the hooves of horses and the wheels of vehicles than rounded river-stones. By 1889, under private contract, Fourth Street was paved with basalt blocks from Channel to Kentucky (on the south side of the channel). Most of the basalt paving blocks extant along Channel and Berry today appear to date from the early 1890s.
119. The first account of removing vagrants from this area dates back to 1889, when police descended on the “garbage trust,” moved the people out and burned their shanties. From time to time homeless people have sought refuge in this place that has remained remote from city business. On January 24, 1986, history repeated itself as “city officials declared the little village at Berry and Seventh Street to be a health hazard and gave its residents seven days to clear out. In shacks patched together from wood scraps, about two dozen squatters lived in shantytown in a forgotten corner of San Francisco.” San Francisco Chronicle, January 24, 1986.
120. Ruth Huffaker and Sharon Skolnick interview with Nancy Olmsted, January 26, 1986.