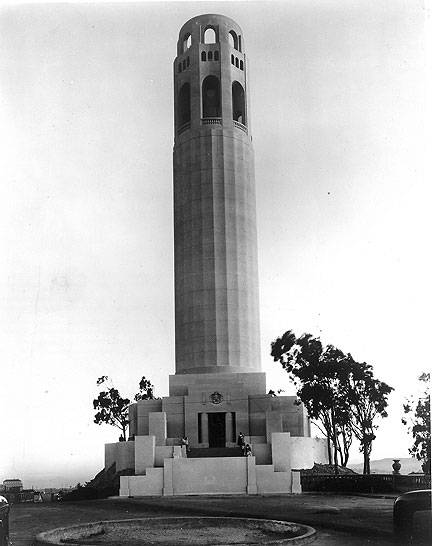 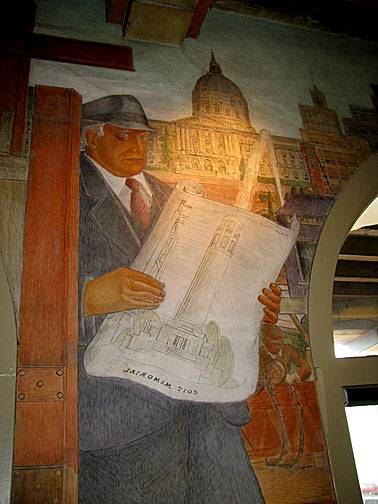 Lillie Coit, San Francisco's most famous fire groupie, had this memorable erection built, supposedly in memory of her husband. But nobody believed her; Mrs. Coit had been separated from her husband after a brief and turbulent marriage, and was well known to be a charming eccentric and general wise-ass. What, people wondered, was she really commemorating? Two schools of thought grew up, both centering on Mrs. Coit's notorious obsession with fires and firemen. According to one, the tower represented a giant fire hydrant. Indeed, Mrs. Coit's love of fires went beyond the bounds of normalcy. Whenever a fire broke out in the City, she was generally first in line among the rubberneckers. The official documents that on her death bequeathed $100,000 for San Francisco beautification belie the oft-repeated claims of Coit Tower being built to resemble a fire hose or to commemorate male anatomy.

At the tender age of 17, while serving as bridesmaid at a friend's wedding, she saw a fire engine roar by. Lillie completely forgot about the wedding and raced off in hot pursuit of her favorite engine, Knickerbocker No. 5. After many more such scenes, the firemen of the Knickerbocker company made her an honorary member; she later returned the favor by honoring their members...er, memories...with the tower that bears her name.

Actually, Mrs. Coit is not all that unusual; San Franciscans have a long and notable history of pyromania. The City's most famous 19th-century firefighting organization, the Social Company, didn't just use water to put out fires; they were famous for stocking their engines with cases of champagne to bolster the morale of the men during a fire. Their drinking/firefighting etiquette consisted of smashing the necks off bottles and swilling the champagne while battling a blaze (Dickson, 36).

One boozing firefighter, Charlie Schultz, reportedly missed his noon wedding after he rushed off to a fire at 10 a.m., helped extinguish the blaze, passed out immediately thereafter, and didn't wake up till the next day. By then, it was too late; when he hurried to her house to apologize, the bride slammed the door in his face, and Schultz later settled for a different woman. (Dickson, 28)

San Francisco's love affair with fires began in 1849, the year of the Gold Rush, when the City's population increased tenfold in less than a year, and rickety wooden structures popped up everywhere. On Christmas Eve day, an inferno arose in the quadrangle between Clay, Washington, Montgomery and Kearny Streets. The authorities stopped the fire from spreading even further with an enjoyable little trick: They used gunpowder to blow up buildings around the perimeter, thereby depriving the fire of fuel. Despite the horror and destruction, everyone was a little awed by the pyrotechnic display. Though officially lamenting the disaster, San Franciscans secretly hoped for another one. They got it in spades four months later (May 4th, 1850) when a much bigger fire burned down over four million dollars worth of property. Along with the flames, rumors spread that arsonists had set the blaze for some nefarious purpose or other. While some obediently fought the fire, most refused to lend a hand unless they were well-paid. The difference of opinion led to rioting, plunder, and general mayhem. In short, a remarkably good time was had by all. A month later, the City was completely rebuilt, and--you guessed it--a third fire (June 14th, 1850), the biggest yet, burned the whole place to the ground. Another rebuilding was soon followed by yet another fire (September 17th, 1850). By the fifth fire (May 3rd, 1851) the town had grown to the point that the losses when it burned down totaled over 12 million dollars. By the sixth fire (June 22, 1851)...well, Ill spare you the details. Suffice it to say that San Francisco's fiery history seems to have induced a sort of mass pyromania in the local population. By the time the Great Fire of 1906 burned down the City after the earthquake, San Franciscans: "...spoke of that fire with bright eyes as one of the greatest fires of all times. The were proud of it; they loved to boast of it. Would you believe it, they would ask you, the sky was so bright with flames that out in the Presidio miles away you could read a newspaper at midnight by the glare! It was a grand fire, a great fire, a heroic fire a ... why, it was one of the finest fires you had ever seen...There was a reason for all this...this complex...this dementia." (Dickson, 28)

The reason, Dickson implies, was that its venerable history of mighty, and mightily enjoyable, blazes had turned San Francisco into a city of fire freaks. The tradition continued after 1906. In the 20s and 30s, arsonists kept torching the gigantic wood crosses atop Mt. Davidson. In the '80s, then-Mayor and now-US Senator Diane Feinstein followed Lillie Coit's footsteps by tuning in to firefighting frequencies on her ham radio and rushing off to fires whenever possible.

Considering San Francisco's burning infatuation with fires, it should come as no surprise that the City's flag features the phoenix, the legendary bird that burns itself up and is reborn from its own ashes. Weirdly enough, San Francisco adapted this flag in April, 1900 six years before the Great Fire and subsequent Great Rebirth. 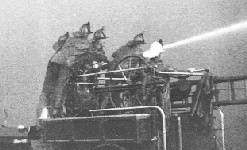 Well, perhaps their efforts were not in vain. 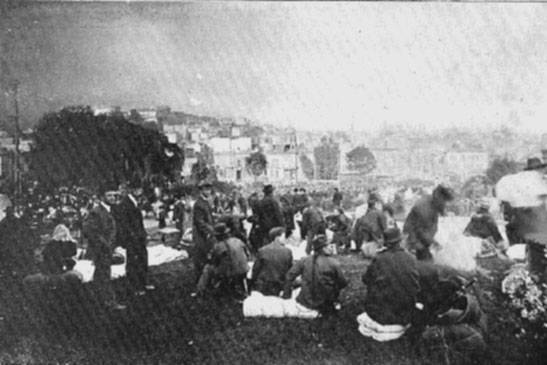