Urban landscapes are vast monuments to the prevailing social order. They can be read for clues to the ways people have lived and thought through time. Any modern city can provide a point of entry for understanding the workings of the space-economy, of urbanization as a process, and of national material cultures. At the same time, local difference is of more than parochial interest because it may reveal the specific conditions of origin for practices that spread across whole countries or even around the world: who could study the history of film without a close look at Hollywood? Local differences may provide clues to unevenness within larger geographies of capitalist development, industrialization and urbanization. Most important, they can bear witness to resistance against the whirlwinds of capitalism, imperial conquest and nation-building, and to the persistence of oblique ideas and ways of life in the face of homogenizing forces of modernization. A look at the distinctive residential landscapes of the San Francisco Bay Area can begin to capture the character of the place and its people, and can help reveal both some larger strands within the thread of American city-building and some divergences from the well-trodden path that make San Francisco unique among American cities. 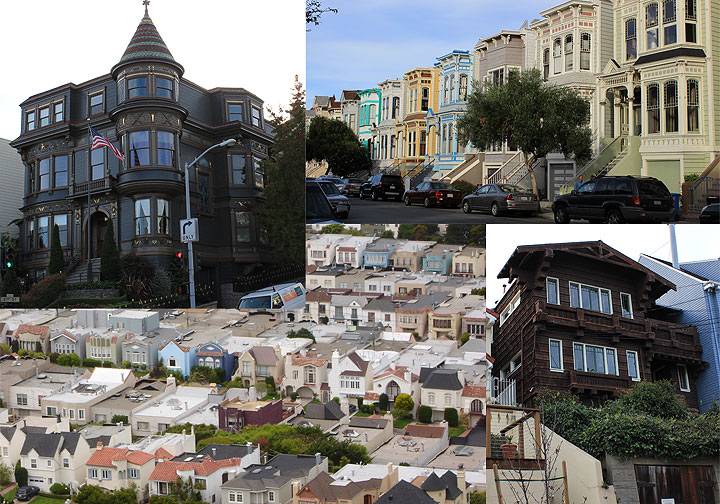 The peculiarities and conformities of the Bay Area landscape are little understood even to local residents, and what they reveal about the possibilities, contradictions, and deep perversities of bourgeois urbanism is little appreciated. This is less true of Los Angeles, proclaimed by some geographers as ‘the capital of the 20th century’, and widely touted as a paradigmatic space of modernity or postmodernity. (1) In Los Angeles: the architecture of the four ecologies, Rayner Banham turned around international opinion by showing the vibrancy of LA’s modernist, and vernacular tradition, despite the apparent shallowness of the city’s landscape and life. In the 1980s geographically minded critics such as Frederick Jameson, Edward Soja and Mark Gottdeiner claimed that southern California’s rampaging banality held the clues to the latest in everything postmodern. (2)

Despite the brilliance of all such readings of California iconography, the lay of the land can still be deceptive. The urban landscape in the San Francisco Bay Area is markedly different from that of southern California. The locals delight in certain kinds of living spaces from which spring much of the attractiveness of the Bay Area to visitor and resident alike. Of course, the bay metropole shares in the common attributes of American urbanization: crass commercialism, mass home-building, and rampant fringe development. Indeed, California, north and south, is where many of the key elements of twentieth-century cities were invented and perfected. It could be that Los Angeles and Las Vegas are today the vanguard, while the sleepy north has fallen behind in the race to the future. San Francisco was, after all, celebrated as the brashest (and possibly the ugliest) city in the world in its early days. The Bay Area has hardly stagnated, however, and it is now the fourth largest metropolitan area in the United States, with over 6 million inhabitants. The fringe of metropolitan expansion extends 50 to 100 miles from downtown San Francisco. Yet the texture of the urban area around the Bay has not gone the way of Los Angeles: neither modern nor postmodern, neither merely suburban nor, much less, postsuburban. It is, if anything resolutely anti-modern in outlook and, lacking a modernist antithesis, unable to mount much of a postmodern offensive either. It is massively suburbanized, yet its heart was never cut out, and both core and suburban areas remain distinctly urbane. Urbanity—that elusive combination of density, public life, cosmopolitan mixing, and free expression—is the key term for unlocking the Bay Area's history and geography.

Four pieces of the urban puzzle—four residential ecologies, to echo Banham—occupy much of the critical ground of the metropolis. The oldest and most famous is the nineteenth-century Victorian townhouse realm. The most recent and extensive is the vast domain of single-family homes, mass suburbia of the twentieth century. The dominant element setting the cultural tone of the Bay Area is a middle-class suburbia of a peculiar sort: the ecotopian middle landscape. The most overlooked, yet vital, realm of all is the hotel and apartment districts of San Francisco and the inner East Bay. All four ecologies have their counterparts in other American cities, but the peculiarities of their form, scale and survival in the Bay Area lends the place a special feeling and look. In three of the four realms, an urbanism born of high density and cacophonous diversity still runs rampantly in counterflow to conventional American suburbia. Nor did mass suburbanization and its plain of simple homes ever entirely break with the earlier mold of regional urbanity.

The four residential zones considered here establish the basic tone of urban life, particularly in the central realms of the metropolis, and can provide a strong foundation on which to understand geography, culture and politics in the region. This civic landscape springs from the distinctive class, political, and cultural nature of the Bay Area—relatively wealthy, petty bourgeois, bohemian, cosmopolitan, laborist, environmentalist, egalitarian, anti-modern—and embodies the contradictions of the libertine capitalism that is a local trademark. We begin to glimpse this society and its politics behind the facades of the material landscape. (3)

Victorian Order and the Look of Urbanity

A City of Small Homes: Making the Mass Surburban City