Difference between revisions of "La Veinte and a Half"

This small group was like a sidebar to La Veinte, they congregated on 20th between Valencia and Guerrero where Donald Arana, “The Araña” (spider) lived. They claimed a partial stake in La Veinte due to being familiar with the guys from there, they also went to the pool hall to play. Donald, my brother Jaime, Juan Wong of Guatemalan and Chinese origins, Mike “el Ruso,” Roberto Tafoya—el Alboroto (The Commotion), Gallinita, Rafael, Julio, el Peruano—Hector Guzman, El Chino—Carl Ng, a real Chinese, and others were some of the guys in the crew. They were a calmed down version of La Veinte they mostly drank and went to dances together. Or, sometimes they would go to the movies at the Tower Theater, a Spanish language movie house, by opening a side door and running in. The talent show at the Tower, was a favorite time to sneak into the theatre.

Besides these activities, some of them hustled on homosexuals. Homosexuals would invite them to their places get them drunk and show them porno in order to have sex with some of them. For the homosexuals they were boy-toys and lavished money, liquor and presents on them. Eventually they paired up with their favorite fellows. Eventually many of these people learned to hustle exclusively on Latino homosexuals and used this lifestyle to survive and make money. Peruano—Hector Guzman became the couple with La Condesa (The Countess) after someone else. Donald was a Nicaraguense and he coupled with Roberto Lopez, even after he married, he would have Roberto over for dinner with his wife and him.

Gays were not called gay at this time and many could be found cruising up and down Mission Street picking up teenagers, others could be found picking up kids at the Greyhound Bus Depot or the East Bay Bus Terminal. Among the fellows of La Veinte y Media and these gays they would hold parties with a lot of drinking and porn movies and they would play music and dance. I suppose eventually the lines blurred and it was men having sex with men. Culturally, the machismo of Latino men won’t permit themselves to be homosexual or bi- when in a homosexual relationship but in essence, they are in a homosexual relationship. They consider the other guy as being the gay one and themselves as hetero male, or in today’s vernacular—the top.

An episode concerning La Veinte and a Half. Once when twentieth and a Half were having a drinking binge at Dolores Park it came up we were going to fight the Landers St. Boys, a group of boys who lived on Landers St. the why I never found out. We walked over to their haunt and Francisco Marin spoke to them he made peace with them and we wound up drinking with them. 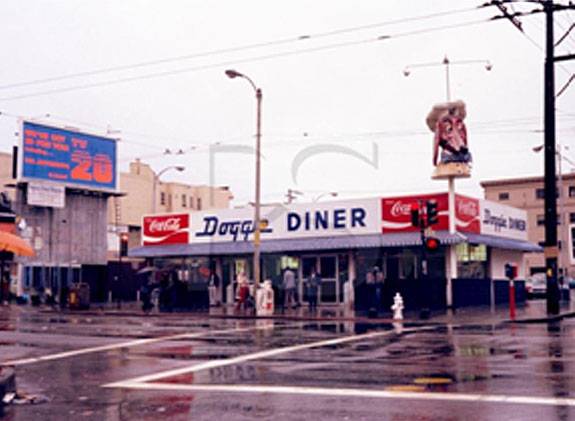 The Doggie Diner, a fast food diner, wasn’t a gang, it was a spot, a meeting place, like today’s malls, it was also a social network. The trademark was a head of the wiener dog wearing a bow tie and a chef's hat it was centrally situated on Mission at 18th and was perfect for a meeting spot for Mission youth, even the architecture was great for those inside to talk with those outside, the barrier windows were that low. It was open 24 hours a day (See picture). It even had a great parking lot where car clubs and teenagers who could afford a car could gather. The driveway on Mission St. permitted the passengers to stop and chat with whoever was around. There was constant local foot traffic. On weekends, there was a constant flow of teenagers seeking the party: “Where’s the party?” was all one had to utter to find the party. A story Marin used to tell was about how “El Tarzan” once pulled an employee through a small service window because he had disrespected one of his friends.

Before BART construction destroyed the ambience of Mission Street as a plaza, where residents would take a stroll hundreds of people would take a walk or go the movies at the New Mission, the Grand, the Tower or the Tower theaters. In those days, there really was a small town feel to Mission Street where neighbors said, “Buenos Dias” to each other. After the construction ended things did not go back to normal.