by Laurie Udesky, originally published in The Nation, May 1994 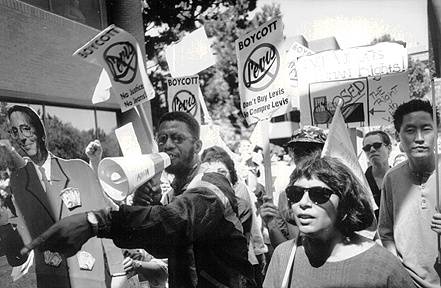 In April, 1994 the Council on Economic Priorities awarded Levi Strauss for its "unprecedented commitment to non-exploitative work practices in developing countries," a commitment the company boasts of, pointing to "sourcing" guidelines that pledge it to work only with contractors who provide a safe and healthy work environment, do not use child labor and "aspire to an ethical standard not unlike our own."

In Juarez, Mexico, there stands an abandoned plant called Maquilas Internacionales, aka Intersew, which had made jeans on contract for Levi until its U.S. owner ran off last year. I talked to more than a dozen of the women who were stiffed of back wages. They allege:

At least ten children under 14 had worked at the plant.

In the rainy season, rain poured through the roof and collected in puddles on the floor, causing workers to get electric shocks from their sewing machines.

To sop up the water, managers would throw "dirty toilet tissues and used Kotex" on the floor. "It smelled really bad, and there were no windows," one worker said.

Workers were laid off for a few days if they went to the toilet too often.

The women say all these conditions were apparent to Pierre Darbonnier, a high-level Levi employee who they say worked regularly at their plant. An interoffice memo from a Levi division to Darbonnier indicates Darbonnier's close involvement with production at Intersew. Armando Ojeda, a Levi spokesman, denies all the allegations and says an audit of the plant last year found it to be "in compliance with our sourcing guidelines."

Intersew's owner, Donald Heath, owed $400,000 in back wages; according to the workers' attorney, Rodolfo Sols Parga, under Mexican law, "whoever is the owner or manager has to pay, and Darbonier was manager, so Levi's is responsible." Ojeda says the vanished owner is responsible. Levi offered a paltry $15,000 for Intersew's equipment and $69,300 for back goods, which the workers sold elsewhere for a better price.

Meanwhile, across the border in El Paso, Ojeda says, workers at Levi plants benefit from "profit-sharing, child care subsidies and enhanced health care." Still, this did not impress Milton Moskowitz, who last year removed Levi from his updated version of The 100 Best Companies to Work For in America. "There is a discrepancy about benefits--people in the headquarters have better benefits than workers in the factory," he says. He adds that Levi could not maintain its standing after closing a plant in San Antonio and heading for Costa Rica, leaving 1,100 workers jobless. Ojeda says Levi paid $21 million to the community for the retraining of the former workers. To which Irene Reyna of Fuerza Unida, an advocacy group made up of the displaced workers, responds: "Neither the city nor Levi even notified former Levi workers that this money was available. When we found out about it--by word of mouth--and stood in line, not even a quarter of the former workers got any help." Three years later, Levi offered to help needy workers, but they are scattered and Fuerza Unida has no means to locate them all.

At other Levi plants, workers have been enlisted in a system called FAST, for Finishing and Sewing Teams, in which pay is tied to productivity. Reyna says team members at a plant in San Antonio have had fistfights in the parking lot, as slower workers are abused for bringing down the earnings of the team. The fights were news to Ojeda, who nevertheless says, "It's not inconsistent for people who go from individual piece rate into a team system, even with all the training, to have some friction." 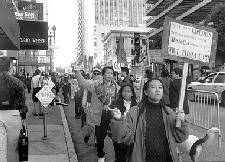