Listen to an audio description of Komotion International, part of the "Bending Over Backwards" walking tour:

voice: Sasha Lilly and Robin Ballinger, originally part of an "Against The Grain" show at KPFA-FM. 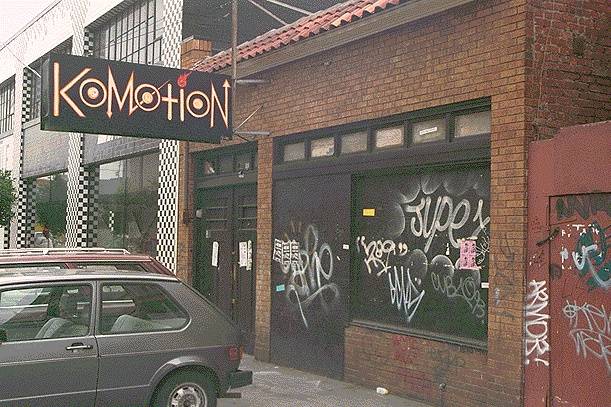 The gallery was little more than a narrow corridor between the ticket desk and a black curtain leading to the main room where the live acts would take place. Consisting of rough concrete walls that always seemed to be in need of a paint job, an old but permanently affixed pipe ran down the length of one wall about four feet from the floor. On the other wall, two doors were cut leading to the bathrooms and tech studio respectively. If the hardness of the walls and the lack of any expansive space limited how one could display art, the traffic to the bands and bathrooms often made it hard even to see it. During a set in the main room, one had a better chance but even then people seemed to be hanging out, talking and smoking and drinking beer, often leaving their footprints on the wall and a beer bottle on the floor.

The gallery, by normal standards, was not the best place to exhibit art. On the other hand, its standards were not normal. Komotion gallery was not a place to showcase commodities. Neither was it an "alternative gallery" that catered to the art crowd or reproduced the uptown galleries' view of art. If the audience was decidedly different -- night creatures drawn primarily to world beat and anarchist bands -- the art itself and the overall atmosphere in which it existed was as well.

Some artists I took to the gallery were excited by what they called its "realness." Others were ill at ease, even disdainful, of the same. Both, upon later inquiry, seemed to be responding -- if in opposite ways -- to the combination of three things:

1) The art itself. Eclectic, widely divergent in skill and style, if there was a unifying thread, it was that most dealt with some personal, spiritual, and/or political theme. Art for art's sake was for the most part absent here. So were post-modernist installations except to the degree that we are all postmodern. In place of pristine and polished works, one would more likely find a primitive one with a decidedly human voice struggling to come through.

2) The art's display. The way the art was shown tended to mirror the rawness of the space itself. Not in some conceptual or contrived way, but spontaneously -- like the yellowing of the walls. Usually crudely hung and /or with little space between the works, it often seemed that the goal was just to get them up so their messages could be seen. While some found this refreshing, even reinforcing the spirit of the works themselves, others dreaming of more sacred sites, did not.

3) The audience's relation to the art. As the people moved back and forth between the street and the rooms, it was apparent that most of them had not come to see the art per se, nor had any special reverence towards it. This is not to say that they didn't look at it, and often for a long time. Art as a form of expression, however, was given no special status over other forms, be they bands, or, indeed, the words and actions of the spectators themselves. For some, this was exciting, even liberating. For others, it was a breakdown of everything held dear.

Over the years, I saw a wide range of art at the gallery: spiritual guests, urban angst, agitprop, sophisticated work, naive work, good work and bad. Group shows, solo shows, cause oriented and benefit shows. Some I loved, some I hated, some I quickly forgot about and moved on -- to the dance floor and/or bar.

What I remember most about the gallery, however, was that raw, open, and strangely human quality. A quality that didn't exist in a vacuum but permeated the club overall. Indeed, I too rarely thought about going to the gallery per se but, like the others, to the club as a whole: to see friends, hear some bands, and yes, as a part of the night, to see some art as well.