Ten seconds of aerial view of the Mission Bay railyards in 1963. 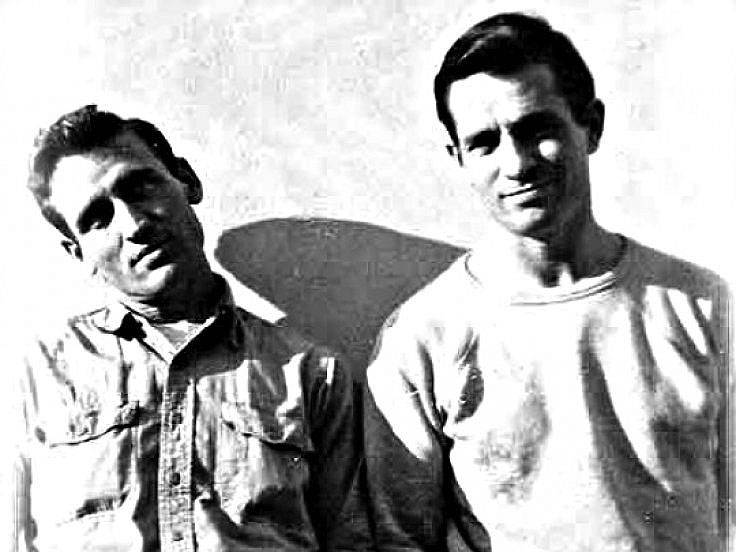 A picture of Neal Cassady, left, and Jack Kerouac, taken by Carolyn Cassady.

Early in the first section of Allen Ginsberg’s landmark 1956 poem, “Howl,” there is a reference to “angelheaded hipsters” who “wandered around and around at midnight in the railroad yard wondering where to go.” (1) Wandering, transient, disillusioned—the railroad yards were symbolic of the Beats, a generation of writers, poets and thinkers who populated San Francisco in the 1950s and 1960s and established a literary and cultural revolution. Beyond just symbolism, though, the railroad yards proved to be an important physical space for many of the most famous Beat poets. Writers like Jack Kerouac and Neal Cassady spent formative time working on the San Francisco railroads in the early 1950s. These experiences challenged some of the stereotypes surrounding the movement, and also heavily influenced their work, perhaps most specifically in Kerouac’s prose poem, “October in the Railroad Earth.”

Kerouac was considered by many to be “The King of the Beats.” (2) However, unlike the other leaders of the generation, he did not have a strong connection to San Francisco. Born in Lowell, Massachusetts before attending college in New York City, Kerouac did not make the trek out west until he was persuaded by Cassady, another influential Beat poet who had accompanied Kerouac on a legendary road trip that became the subject of Kerouac’s famous novel, On the Road. Cassady was working on the Southern Pacific Railroad and in 1951, he persuaded Kerouac to join him in San Francisco, working as a baggage handler and eventually as a brakeman. (3) The process of getting Kerouac to come west took many years, but Kerouac always had a fondness for the city and its surrounding natural landscapes. In a letter to fellow Beat poet Allen Ginsberg in 1948, Kerouac enviously describes Cassady’s life out west as a brakeman. “The Southern Pacific Railroad is the most wonderful railroad in the world incidentally...on a Sunday morning riding down through the sunny San Joaquin Valley…” (4) It is not surprising that Cassady was eventually able to convince his friend to come to the Bay Area.

When Kerouac arrived in San Francisco, he began working on a railroad that was woven into the city’s transportation system. The railroad was an important part of the city’s infrastructure in World War II (5), and long before Kerouac arrived, it had become a piece of the city’s transportation link to the South Bay. The main railroad station was located near the corner of Third Street and Townsend Street, close to where the Giants’ ballpark sits today. This station was the final stop for commuter trains coming north from San Jose and the starting point for long-distance trains to Los Angeles. (6) The company railroad yards were located in Mission Bay, and stretched farther south on landfill that was once Candlestick Cove. Kerouac worked in the yards and on the trains while living in a hotel near the station. (7) In a letter to Ginsberg in 1952, he describes his living situation in a “fine little room in Skid Row at $4 a week and I was arranging myself so well...that I was happy for the first time in years.”(8) 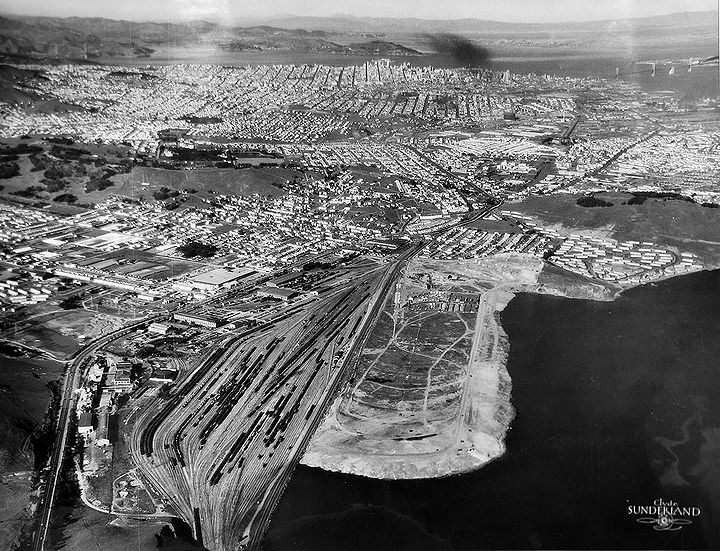 Northerly view from above San Bruno Mountain with railyards and San Francisco dump in foreground in the former Candlestick Cove, SF city limits not far north of the bottom of the photo.

Kerouac’s early time on the railroads possibly shattered some of the perceptions of what it meant to be part of the Beat Generation. At the time of their rise to prominence, critics of the movement often discussed the Beat preference for leisure and art over work. Those who did not understand the movement well perceived Beats as struggling artists, spending their days hanging out on street corner cafes or in bookstore basements. However, many of the Beat poets were deeply ingrained into the work culture of the city, working in industry and business while also pursuing their art.

However, the work was not always embraced by the Beats, and Kerouac quickly grew disillusioned with his job for Southern Pacific. Railroad work was tough and grueling. Brakemen were often exposed to dangerous conditions and serious injury risk, something that befell Cassady when he broke his ankle trying to avert a train crash in the early 1950s. (9) Kerouac was never seriously injured while working on the tracks, but the intensity of the labor and the demands from his employers led to frustration and anger. In another letter to Ginsberg in 1952, Kerouac wrote, “I hate people. I can’t stand people anymore. The phone just called me, gotta go to work again, I’m sick and tired of it—this is why it took me so long to answer you, the railroad.” (10) If there was one thing that kept Kerouac going during his time in San Francisco, it may have been his friendship with Cassady, a friendship he described to Ginsberg as “inseparable, immitigable, unsolvable.” (11) Cassady was more of a railroad man than Kerouac, and Kerouac’s letters suggest that Cassady was a driving force that kept him going. Kerouac describes “sleeping one night on the railroad, on an old ratty couch, hard asleep after three days and three nights of work and no sleep, Neal was bent over me, hung over me, laughing, “There you are buddy! Come on, now, come on, now…” (12)

In this sense, Kerouac’s brief stint in San Francisco had its share of highs and lows. The ways in which his experiences shaped him as an artist, though, are clearest in one of his most beloved prose poems, titled “October in the Railroad Earth.” In the poem, recorded in 1959, Kerouac describes his experiences working on the railroad, from his interactions with “neat-necktied producers and commuters” to his “long Saturday afternoons listening to Jumpin’ George with my fifth of tokay no tea.” (13) It is a prose poem in Kerouac’s typical writing style, confessional and flowing. In an interview with the Paris Review in 1968, Kerouac actually compared the poem to one of the trains that rumbled down the San Francisco tracks, calling his prose “experimental, intended to clack along all the way like a steam engine pulling a one-hundred-car-freight with a chalky caboose at the end.” (14) “Railroad Earth” starts by describing the commuters at the Southern Pacific station and it ends with an early-morning conversation with a woman in a club. Along the way, Kerouac describes the types of people and interactions he sees around the city. Within these descriptions is a beautiful and haunting depiction of San Francisco. It is something like an autobiographical portrait of Kerouac during his brief time in a city that influenced his life and work in innumerable ways.

Even after Kerouac left San Francisco and traveled back east, he continued to reflect on his railroad experiences in correspondence with Ginsberg. While it is difficult to completely characterize the impact of the railroads on the Beat experience, it is clear that time spent toiling on the tracks contributed to the overarching San Francisco experience for Kerouac and Cassady. While much scholarly work has been devoted to the impact of the City Lights Bookstore on the construction of the Beat community, the railroad tracks south of the city are also significant because of how they shaped individual experiences and helped feed the hungry minds of the writers. The Beat Generation yearned for experimentation and sensation. As Kerouac explained, their lives were “a choice between boredom and kicks...a kick is anything that stimulates sensation.” (15) When analyzing the Beat railroad experience, it becomes clear that the railroad was full of many sensations, adding texture and emotion and pain to the writers’ lives. As Kerouac writes partway through “Railroad Earth,” “everything is pouring in, the switching moves of boxcars in that little alley which is so much like the alleys of Lowell and I hear far off in the sense of coming night that engine calling our mountains.” (16) In his words, it seems like the railroad was the ultimate “kick.”