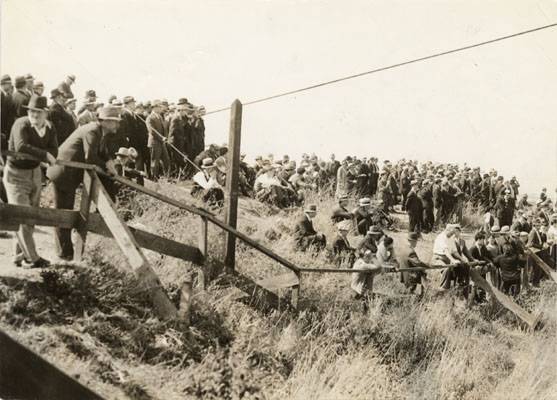 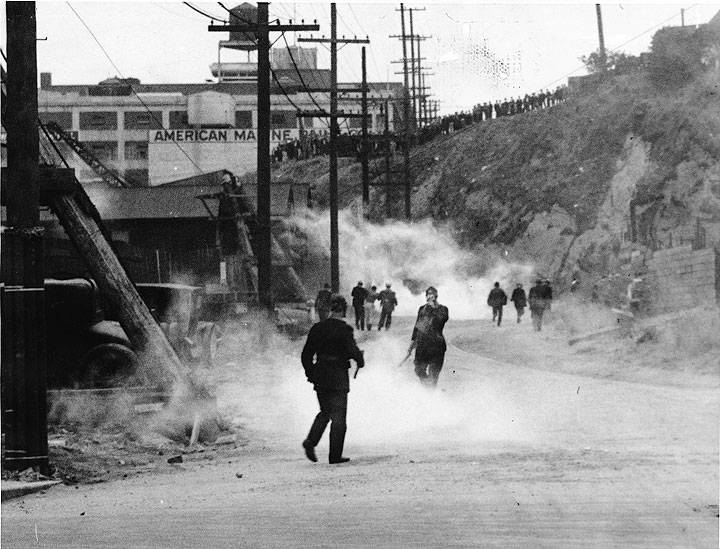 After nearly two months of losing $100,000 a day, and after the repudiation of a deal signed without rank-and-file approval by union president Ryan (he was booed off the stage in San Francisco after he presented the "deal"), the owners, with the support of Mayor Rossi and the SF Police, decided to "open the port." At noon on July 3, 1934, the Industrial Association made its effort to transport goods from the docks to a warehouse. "A barricade of freight cars of the stage-owned Belt Line Railway was drawn around Pier 38, from which a lane of police cars was formed to the warehouse. In this safety lane trucks moved with the cargo. On the outside of the lane the strikers were attacked by police with clubs, guns and tear gas. The strikers retaliated with bricks and railroad spikes. All afternoon the fighting continued. One striker was killed and a score badly injured."

After a holiday truce on July 4 (during which California Governor Merriam ordered the National Guard to stand by), police charged 2,000 strikers who were picketing Pier 38 and drove them away after an hour and a half of fighting. The fight continued later in the afternoon as police attempted to drive 5,000 strikers from Rincon Hill, overlooking the waterfront and the Belt Line Railway. Vomit gas and tear gas were used extensively (salesmen from competing firms were handing out free samples to the police!), along with the usual guns and clubs, and strikers responded by throwing spikes and bricks.

As rumors flew that the National Guard were arriving in the evening, the workers made a last desperate push to seize the railway only to be repelled by police. On this Bloody Thursday (July 5, 1934) over a hundred people were wounded, and police bullets killed strikers Nicholas Bordoise and Howard Sperry. 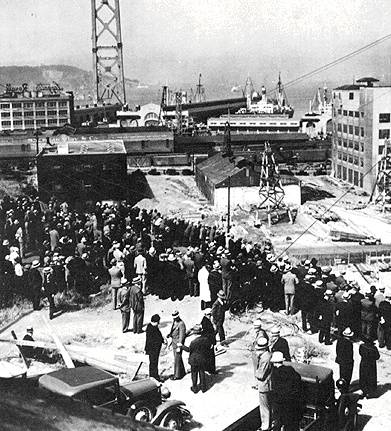 The corner of Steuart and Mission Streets, where the two strikers had been shot down, was adorned with flowers and chalked with the inscription: "Two men killed here, murdered by police." In turn, the Governor sent in 1,700 National Guardsmen who installed barbed wire and machine-gun nests along the Embarcadero. Troops were ordered to shoot to kill.

Freight was moved through this phalanx of protection but languished at the warehouse since the Teamsters continued to refuse to move it. The strike held on, 250 ships lay idle between San Diego and Seattle, and the companies were now losing $1 million a day.

HARRY HAY (photo) was there on July 5, 1934... a bullet zinged past his ear. Two men were killed, eighty-five more were hospitalized.