Difference between revisions of "Joan-Marie Shelley and the Merger" 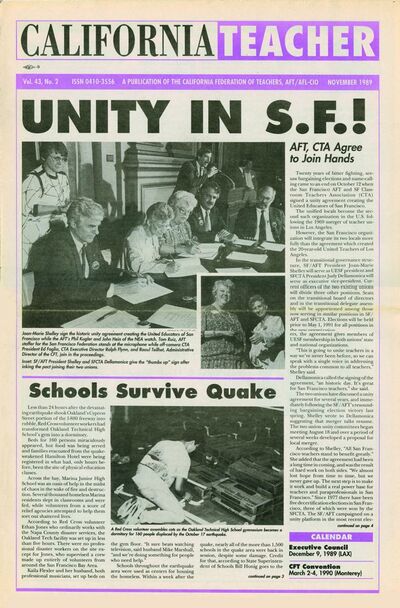 In November 1989, the CFT newspaper, California Teacher, announced a historic agreement to merge CFT and SFCTA to create the United Educators of San Francisco union for all public school teachers.

A joint dinner of the Executive Boards of the SFFT (Local 61) and SFCTA was held in 1977 under the leadership of Pat King (SFCTA) and Jim Ballard (SFFT) to propose a merger of the teacher unions in San Francisco.

When Local 61 won back collective bargaining rights for the teachers of San Francisco in 1989, the path was laid for merger of the competing teacher unions. The eventual merger put to rest a decade of intramural warfare. Roughly a third of the teachers were members of each organization and a third were unaffiliated. Management was able to play off one organization versus the other and it was difficult for either side to accomplish the kind of strength needed to win a good contract.

Local 61 President Joan-Marie Shelley offered merger to the SFCTA and its president, Judy Dellamonica. With the support of CTA state leadership, (President Ed Foglia and Executive Director Ralph Flynn) and CFT President Miles Myers, this olive branch was accepted and local leadership sat down to figure out how to work together. There were no merged states and only one merged local (Rosemount, Minnesota) that used the full merger model that would become UESF.

The state and national parent unions agreed that they would grant full representation, but accept half dues for all the members in San Francisco. This would end the expensive collective bargaining elections and create stability and strength in the union. Every teacher would be a member of UESF, AFT, NEA, CFT, and CTA.

Teachers who had philosophical or other reasons for not belonging to one of the affiliates would still maintain membership in UESF and the other affiliates. There was no financial incentive not to belong. Joan-Marie Shelley wrote in “Unity, Strength, and Merger” that there were 13 SFCTA members who chose not to join AFT and 13 SFFT members who did not join NEA.

Larry Halling (SFFT) chaired a joint constitution and bylaws committee that successfully created the governing documents for UESF. A transitional executive board was carved from the two existing unions with the SFCTA president serving as UESF vice president. 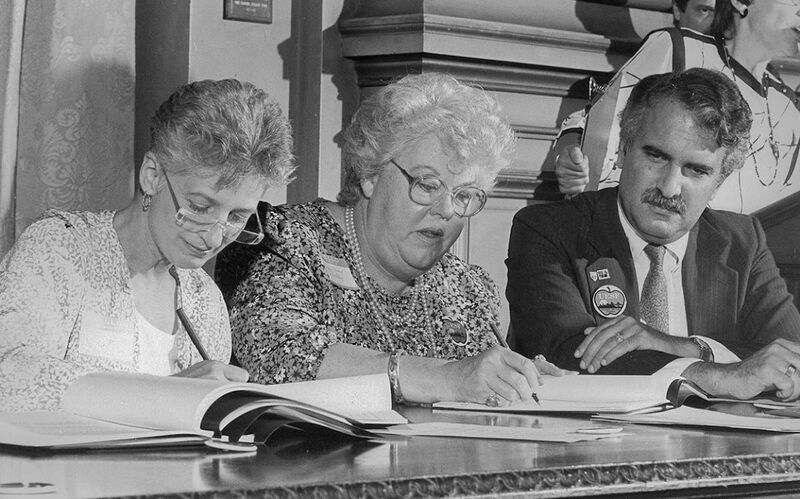 Local 61 President Joan-Marie Shelley, center, signs historic agreement between CFT/AFT and CTA/NEA in 1989. The merger created United Educators of San Francisco, a local affiliated with all four statewide and national unions. Judy Dellamonica, left, signed for the CTA, and the AFT's Phil Kugler looked on.

Joan-Marie Shelley was born into a union family on June 15, 1933. Her father was a teamster in the Bakery Wagon Drivers local who moved on to become head of the San Francisco Labor Council and the state labor federation. He was subsequently elected to the state Senate, then Congress, and finally mayor of San Francisco.

In her early years, Joan-Marie Shelley went to school in San Francisco, attending John Muir, Sherman, Commodore Sloat, and Jefferson. She then went to Lowell High, to Stanford University, and to France on a Fulbright.

Shelley started teaching in San Francisco in 1955 at Mission High, before putting down roots at Lincoln High, then transferring to Lowell.

For 15 years Shelley was a dues-paying member and took no other elected role in the union. But then her ascent was rapid. Joan leaped from member to building rep and area rep, on to strike captain (1971), then got to do that again in a second strike (1974). Next she was voted in as vice president, and in 1984 she succeeded Jim Ballard as president of the San Francisco Federation of Teachers, Local 61.

Shelley led the union defending against a challenge for the paraeducator unit, then mounted an unsuccessful attempt to take bargaining rights from the CTA, and finally, in 1989, Joan led the victorious attempt to reclaim the role as teachers’ collective bargaining agent.

The collective bargaining victory created the platform on which to unite the two rival organizations — SFCTA and SFFT — and create the union we know as the United Educators of San Francisco.

The elimination of organizational rivalry meant that the UESF could finally face the administration as a unified force. This began a new era for the membership of Local 61.