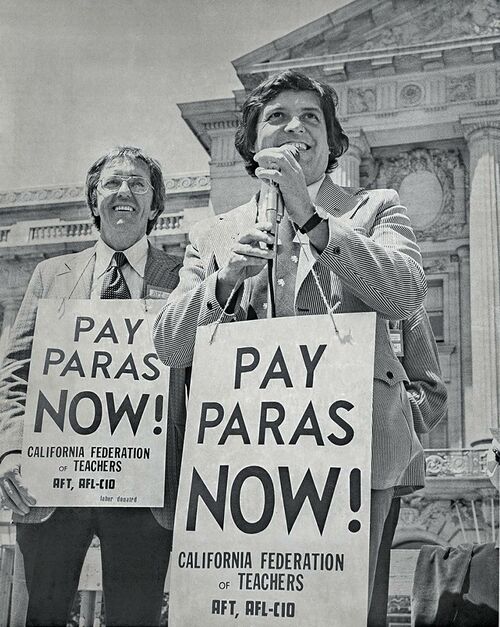 James Edward Ballard was an elementary teacher specializing in math. A navy veteran of World War II, Ballard hailed from Kentucky and had worked in the United Auto Workers before coming to teaching. In the mid-60s, Jim Ballard was hired as the field representative for the San Francisco Federation of Teachers, AFT Local 61. Two years later he was elected president of the local.

Jim Ballard brought the local union into the modern era. He followed men who were committed to the union and were great spokespeople for teachers, Al Tapson and Dan Jackson. What Ballard added was organization and a sense of the necessary discipline to get the job done.

Under Ballard, the SFFT took a militant edge. The city was divided into 10 areas and a feeder system was developed for the distribution and collection of information. Ballard presided over the organization of paraprofessionals into a separate bargaining unit and led Local 61 on four strikes in 1968, 1971, 1974, and 1979.

Ballard was the union president at the time of Proposition 13, a California ballot measure that changed the way taxes were collected, and destabilized education funding necessitating more than a generation of struggle and catching up.

Ballard’s presidency was marked by intense rivalry between the San Francisco Federation of Teachers and the San Francisco Classroom Teachers Association. The 1975 passage of the Rodda Act granting collective bargaining rights to certificated employees meant that the winner of the rivalry represented all the teachers.

Local 61 won the first representation election in 1977. SFCTA won a subsequent one in 1981, after the six-week strike of 1979. SFCTA claimed the dues deduction apparatus and Local 61 was on the verge of going out of business. But Ballard mustered his organizational abilities and Local 61 continued by collecting dues through its affiliated credit union. This meant approaching the entire membership and convincing them to sign up in the union again.

This feat, plus representation of the paraprofessionals, kept Local 61 alive until 1989. At that time the local won back collective bargaining rights for teachers and jointly formed the merged United Educators of San Francisco.

Jim Ballard stepped down from the presidency in 1984 and was succeeded by his vice president, Joan-Marie Shelley.