by Katherine Petrin, originally published in The Semaphore #198, Spring 2012 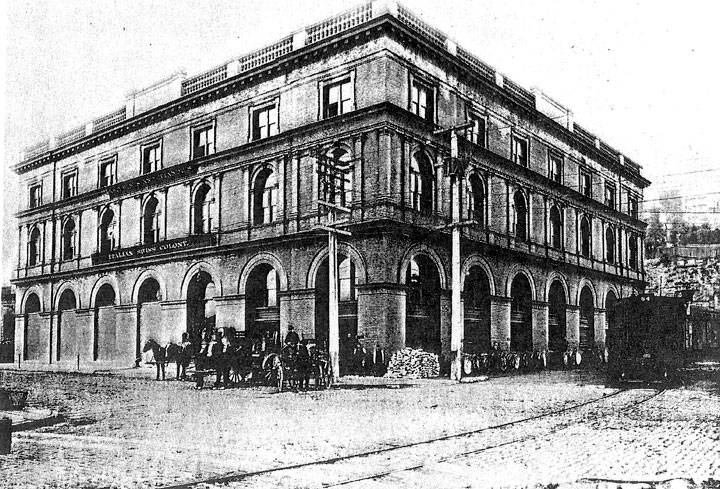 This is a profile of a landmarked building, Landmark No. 102, the Italian Swiss Colony Wine Company building and warehouse. Located at 1265 Battery Street in the Northeast Waterfront Historic District, the landmark status of this architecturally outstanding structure should come as no surprise.

Prior to construction of the Italian Swiss Colony Wine building, the site was an important commercial waterside location and was initially occupied by the Flint Peabody Warehouse complex that dated to the 1850s.

The Italian Swiss Colony building was designed by the architectural and engineering firm of Hemenway and Miller. Architects Sylvester W. Hemenway and Washington J. Miller maintained offices in the Hearst Building at 3rd and Market Streets and were responsible for other important structures around town, including the C. Shilling and Company Wine Cellars at 900 Minnesota Street and the French Bank building (originally Bullock & Jones) at 108-110 Sutter Street.

Built on landfill, the Italian Swiss Colony building was constructed on a steel frame with a brick and terra cotta exterior and was touted for its fireproof materials. According to “The San Francisco Waterfront” (Roger and Nancy Olmsted, 1977), the structure was engineered to withstand the weight of 2 million to 2½ million gallons of wine. Railroad tracks extended from the street into the building interior so railcars could unload wine from the Asti vineyards directly into the building’s wine vaults. The wine was then transported by horse-drawn carts or sent to New York by ship or train. 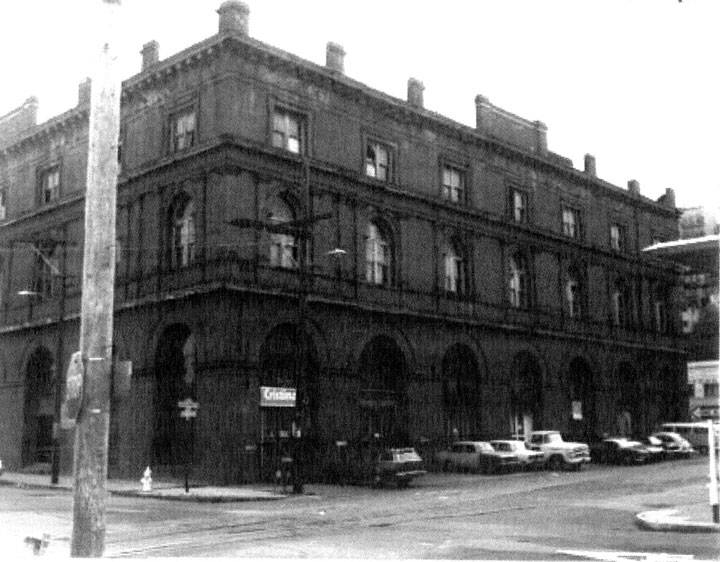 The Italian Swiss Colony Wine Company building as it appeared in 1975 when it was in poor condition. Note that lengths of the balustraded parapet have been removed.

The building is said to have withstood the 1906 earthquake quite well and it resumed its wine storage function post-disaster. During Prohibition it was occupied by the Golden Gate Milk Products Company. It was generally used as a warehouse until the late 1970s by which time the building was in poor condition. The Architectural Quality Survey, conducted by the Department of City Planning between 1974 and 1976, found that the building had high architectural design values for its façade proportions and richness of detailing and decoration. The survey noted “the excellent ornament, molded brick around the arches and the terra cotta at the plinths and capitals and on the pilasters.” The survey also stated that the building was deteriorating and exhibited severe cracking. Long lengths of the cornice and roof-level balustrade had been removed by that time.

In 1977, at the time landmark status was considered, the building was owned by the Travelers Insurance Company, which opposed its landmark status, fearing it would not be acquired as part of a planned project then known as Levi’s Place. By 1980, the building was rehabilitated by Gensler Architects as part of the Levi Strauss and Company world headquarters complex. It was fully restored and adapted for use as offices. A new floor was added at the roof level and the balustraded parapet at the roof level was reconstructed. The building also houses the popular Il Fornaio restaurant. 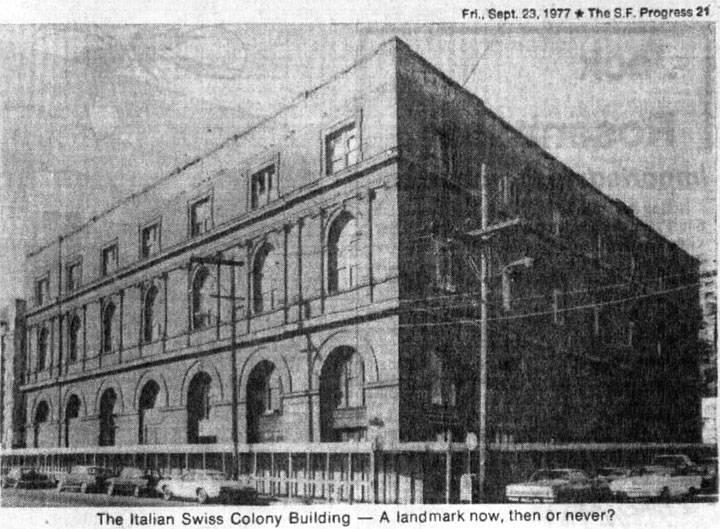 The Italian Swiss Colony Wine Company building in 1977, the year it was designated as a local landmark. Note the complete removal of the cornice and parapet, which were both later restored.

The northern waterfront once had many other well-constructed and architecturally interesting warehouses and industrial buildings that have been lost to demolition over the years. In fact, the Italian Swiss Colony building had a twin, another warehouse of similar design that was located at the southeast corner of Filbert and Sansome Streets. City of San Francisco Landmark No. 102 remains one of the finest examples of industrial warehouse architecture in the area, now designated as the Northeast Waterfront Historic District. 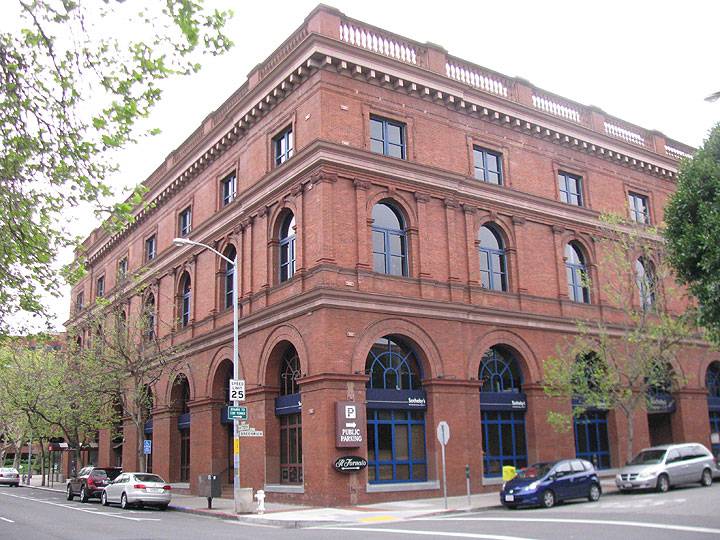 The building in 2012, integrated into the surrounding Levi's Plaza complex.