Is There Life Before Death? 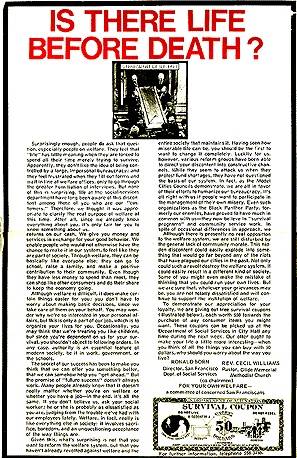 Is There Life Before Death? (text reprinted below)

Surprisingly enough, people do ask that question, especially people on welfare. They feel that "life" has little meaning when they are forced to spend all their time merely trying to survive. Apparently, they don't like the idea of being controlled by a large, impersonal bureaucracy; and they feel frustrated when they fill out forms and wait in line at welfare offices, only to go through the greater humiliation of interviews. But none of this is surprising. We at the social-services department have long been aware of this discontent among those of you who are our "customers." Therefore, we thought it was appropriate to clarify the real purpose of welfare at this time. After all, since we already know everything about you, it's only fair for you to know something about us.

Welfare is nothing more than a form of investment. And like all good bankers, we expect some returns on our cash. We give you money and services in exchange for your good behavior. We enable people who would not otherwise have the chance to make it in our system, to feel like they a re pa rt of society. Through welfa re, they can be basically like everyone else: they can go to school, raise a family, and make a positive contribution to their community. Even though they have less money to spend than most, they can shop like other consumers and do their share to keep the economy going. Although welfare is difficult, it does make certain things easier for you; you don't have to worry about making basic decisions, since we take care of them on your behalf. You may wonder why we're so interested in your personal affairs, but this is only a part of our job, which is to organize your lives for you. Occasionally, you may think that we're treating you like children, but since you're dependent on us for your survival, you shouldn't object to following orders. In any case, authority is an essential feature of modern society, be it in work, government, or the schools. The secret of our success has been to make you think that we can offer you something better, that we can somehow help you "get ahead." But the promise of "future success" doesn't always work. Many people already know that it doesn't really matter whether you're on welfare or whether you have a job--in the end, it's all the same. If you don't believe us, ask your social worker; he or she is probably as dissatisfied as you are, judging from the trouble we've had with our employees lately. Welfare, in fact, really is like everything else in society: it involves sacrifice, boredom, and and unquestioning acceptance of the way things are.

Given this, what's surprising is not that you want to reform the welfare system, but that you haven't already revolted against welfare and the entire society that maintains it. Having seen how miserable life can be, you should be the first to want to change it completely. Luckily for us, however, various reform groups have been able to direct your discontent into constructive channels. While they seem to attack vs when they protest fund shortages, they have not questioned the basis of our system. In fact, as the Model Cities Councils demonstrate, we are all in favor of their efforts to humanize our bureaucracy. It's all right with us if people want to participate in the management of their own misery. Even such organizations as the Black Panther Party, formerly our enemies, have proved to have much in common with us--they now believe in "survival programs" and community service work. In spite of occasional differences in approach, we can get along very well with groups like these. After all, they're just rackets like us.

Although there is presently no real opposition to the welfare system, we are still disturbed by the general lack of community morale. This hidden discontent could easily explode into something that would go far beyond any of the riots that have plagued our cities in the past. Not only could such a revolt destroy the welfare system, it could easily result in a different kind of society. Some of you might even make the mistake of thinking that you could run your own lives. But we are sure that, whatever your grievances may be, you are not totally dissatisfied and will continue to support the institution of welfare.

To demonstrate our appreciation for your loyalty, we are giving out free survival coupons (illustrated below), each worth $50 towards the purchase of any consumer items you might want. These coupons can be picked up at the Department of Social Services in City Hall any time during the next week. Our offer ought to make your life a little more interesting--when you think of all the things you can buy with 50 dollars, why should you worry about the way you live?

FOR YOUR OWN WELFARE-- a committee of concerned San Franciscans