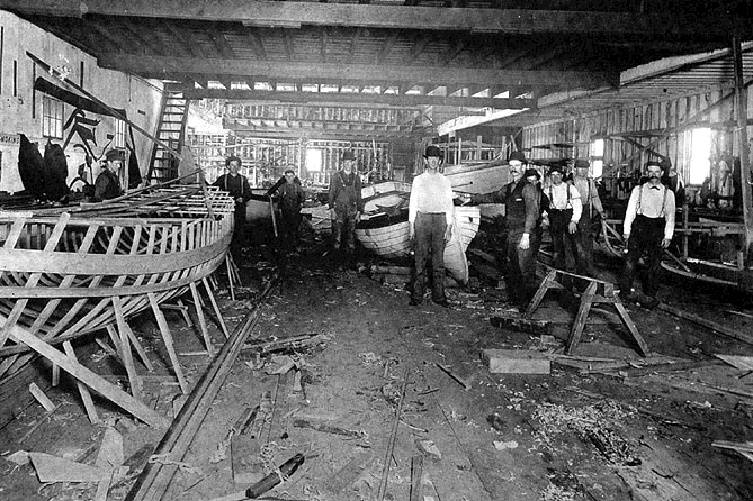 The interior of John Twigg's boatshop in 1899, sons Charles and Jim (with hand on boat) in foreground. Twigg himself was born in Ireland in 1840 and moved his family to San Francisco by 1877.

The historic narrative of Irish American is so entrenched that it could replace the twelve Stations of the Cross posted in stained glass at St. Patrick's on Mission Street. The first station could be an emaciated famine figure with green stains around their mouth. The second would have to be a single woman boarding a ship to America from Cork. The third would be a picture of that same ship, a “coffin ship”(1) packed with immigrants. The fourth could be a tenement building in the Five Points district of New York, and in the fifth, a “No Irish Need Apply” sign could be posted. In the sixth window, would be a picture of an Irish woman scrubbing a floor. For the seventh we might see Irish (not yet Irish-American) rioters in the streets of New York, protesting the draft laws of the Civil War. In the eighth window, would an Irishman, fighting in the Civil War under General Meagher's command. And then, in rapid succession, a policeman in the ninth, a Senator in the tenth, a President in the eleventh, and then maybe, a firefighter at the World Trade Center in the twelfth. These images are static and unmoving, frozen in time. There will always be underpaid Irish women cleaning houses from dusk to dawn. There will always be famine refugees. But missing from these set pieces are other figures, other constants, other realities. Where is Denis Kearney, leader of San Francisco's Workingman's Party? Which window would record the racist speeches he made in the sandlots of the Civic Center? What about Peter York, the Catholic priest who relied on nativist style thinking (minus the anti-Catholic themes) to justify exclusion against the Chinese laborers? Where are the corrupt ward bosses, and the equally corrupt city officials?

Re-counting Irish American history is difficult, especially since it continues to be a subject that's under constant construction and revision. Disentangling Irish-American history from mythic constructions of American self-sufficiency, to get at the real story, is also difficult. "How did you do it?" one might ask long dead Aunts, Uncles, Grandfathers, cousins. "We did it alone, of course," they'd say. "We did it all by ourselves, ourselves alone." This is the common refrain that is sung in Irish-American histories and biographies, which tend to be exculpatory and self-congratulatory. What we needed to do is what we did. What we felt we needed to do was act /organize /litigate /award / control. Cope. This is the unspoken mantra passed down from generation to generation silently, the secret password of the American Irish. Buy the house. Have children. Don't go into debt. Run for office. Don't fuck it up. We managed ourselves. We looked for opportunity, and when we found it, we took it, and then passed it onto those who looked like or thought like us. This instinct of clannish self and communal protection have been explained away as justifiable self-defense in the face of murderous hate, first from the British government, and then later from hostile Protestant communities. The Irish-American diaspora still refers to centuries-old examples of cultural and religious harassment to explain and justify its history in America, even though no one has spat on us or tried to starve us to death for a century and a half.

But to accept without further interrogation the idea that millions of individual Irishmen and women did it themselves is untruthful. From the beginning, Irish Americans self-consciously recognized themselves as a community and re-organized themselves in the new cities of America to acquire political power, social prestige and material wealth. Which is far from saying that, as individuals, they didn't work hard. Irish immigrants, like all immigrants to the United States, did work hard. They did awake at the crack of dawn, to work long hours with low pay. They took what surplus money the community produced, and re-invested it. They built churches where the community could get a sense of its present and lament its fractured past. They built schools and prioritized education, and probably rejoiced at the thought of the first generation of children born in the United States, herded through a predictable routine of morning ablutions, breakfast, school, church, social groups, home, dinner, bed. Who knows how long the memory of walking skeletons or dead bodies by the roadside persisted in the minds of those that lived through the famine and moved to America?

Within a forty-year period in San Francisco, starting in about 1851, the Irish of the East Coast (most of the Irish community of San Francisco came from the Eastern cities of America, not direct from Ireland) had gone through a series of rapid changes. They branched out from being skilled and unskilled workers and produced city bosses, mayors, city clerks, engineers. They formed the leadership and the rank and file of trade unions. And, of course, they stocked the church with its priests, nuns, and bishops.

What had they been? Under the pressures of British imperialism, and from the perspective of the British, not much—surplus populations of landless peasants, mindlessly breeding in the hinterlands of Ireland and prone to revolting against the crown at regular intervals. Irish culture in America in the mid-eighteen hundreds and the visible chip it sometimes carried on its shoulder spoke to the realities of hundreds of years of subjugation. Throughout the eighteen hundreds, the poorest classes of the Irish lived under constant fear of starvation, eviction and/or deportation to penal colonies, like Australia, for political or economic crimes. Although both Protestant and Catholic Irish were subject to widespread poverty, it was the Catholic Irish who were hated and feared for their alliance to Rome, which was seen as a meddlesome foreign power. The cultural persecution of Irish Catholics was severe, and had been a reality since the fourteenth century.

Here is a concise recitation of the relationship between the Irish and the British government. The English were limited in their ability to pay monarchical agents in coin for their part in securing new territories for the crown— the crown was chronically financially over-extended until the Elizabethan era—so, instead, they offered lands and titles in Ireland. This formed the basis of the colonies in Ireland. Communication between England and Ireland was sufficiently inconsistent to allow the conquering classes to be absorbed into Gaelic culture. Because of this, the English government, sensing that its grasp was weakening, subjected Catholics to an early form of apartheid legislation, called the Statutes of Kilkenny. Enacted in 1366, the Statutes tried to reverse the Gaelicization of English colonies in Ireland through the prohibition of any avenue of cross-cultural exchange between the Irish Normans and the Gaelic Irish, or the expression of Gaelic culture. Furthermore, the Gaelic Irish were forbidden from using the Brehon Laws, the native legal system, to settle disputes. They were not allowed to seek office in any church. This was to retard social contact between the Gaels and the “Galls” (a Gaelic word meaning foreigner). The Penal Laws, enacted in 1695, extended these paranoid and ultimately ineffective statues step further. The possession of arms was forbidden, travel abroad to get an education was forbidden, the right to teach, or have anything to do with education at home was forbidden. Irish Catholics (this is how they were seen at this time, after England had left the church) could not buy or sell land or divide their estates. They could not practice law, and they could not hold office. Ultimately, with the act of Union in 1800, their Parliament was dissolved in favor of direct rule from London.

In 1845, the English government saw a golden opportunity to rid itself of its surplus population when the potato crop failed. It was the first failure of many. The British Government, led by lassaiz faire advocate and religious bigot, Charles Trevelyn, continued to export food out of the country. The relief schemes that were organized were farcical in nature; hastily improvised, mal-administered and only effective in pushing already weakened famine victims towards their death. For the reward of a single, unwholesome bowl of gruel each day, the Irish were asked to perform hard labour, such as building roads. To this day, these famine roads crisscross Ireland. (Read Eavan Bolands poem “Famine Road”.) The policy of maintaining food exports, and food prices, which were driven up sharply, drained the country of its people, either through slow painful death or through forced immigration. In 1847, or “Black 47”, as the Irish termed the peak year of the famine, the number reached 100,000. In 1851, several years after the worst of it, 221,253 Irish immigrants, the largest number yet, entered the United States. Within forty year, America took in 2,600,00 Irish refugees, for refugees and not simply immigrants, is what they were.

For most Irish Americans, this is the story. This is why their Great-great-great grandfather or grandmother (a surprisingly high number of immigrants were single women) came to America. The Potato Famine, or An Gorta Mor (this is how you say it in Irish) became the single point of reference for anyone who escaped it, and the memory of the famine remained fixed in the minds of the immigrants and ultimately, their offspring. It is the historical birthing place of the ideas and attitudes that Irish Americans have towards power and self-determination.

1. So-called for the tendency of immigrants fleeing the disaster of the famine to die aboard the ships that ferried them to the North American continent. Thousands of Irish men and women died because of the unsanitary conditions aboard the ships.