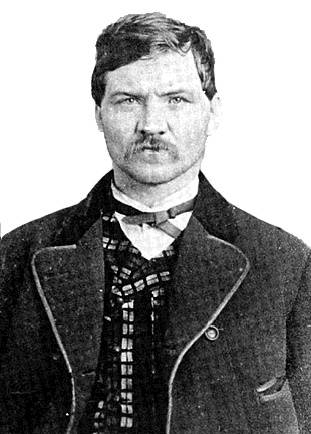 John " Shanghai Chicken" Devine was born in Waterford, Ireland and came to San Francisco in 1861--where he found work for fellow Irishman "Shanghai Kelly" as a boardinghouse runner.

So, stripped of all the history, what and who was a typical Irish immigrant in San Francisco in about 1851? A male, about forty years of age, living a city that had been hastily and badly constructed because of chronic labor shortages. The demand for housing (San Francisco's current housing shortage is not a new problem) then was high and it limited the number of places one could live. The Irish spread throughout the city in a fairly randomized pattern, going further and further west as new developments allowed. In 1880, the community was to be found in the greatest numbers in Wards 7, 10, and 9, on the south side of Market Street, crammed in amongst other immigrant communities, or in the newly expanding commercial and residential district of the Mission and the Western Addition, Wards 12 and 11 respectively.

They were unmarried, or they married later in life. Late marriages were common among famine survivors, a trend that persisted in America. In San Francisco, they were probably a skilled laborer, or a highly skilled laborer, practicing trades learned in Boston, New York or Philadelphia. This is a different story from the Irish who landed in the eastern cities prior to 1851. British imperialism in Ireland had a deleterious effect on the types of labor skills Catholics possessed,(1) which meant that when new arrivals from Ireland possessed antiquated skills, unsuited for urban employment. They got updated pretty quickly though, building canals, cutting stone, doing construction work, working with iron and steel in orders of magnitude unknown in rural Ireland (most immigrants were from rural western Ireland). They got paid more than friends and family left behind on the East Coast, because of the fortuitous combination of labor scarcity and capital investment. By 1870, the average daily wage in San Francisco was $3.27(2) (this figure is itself averages more than 20 wage rates of a multitude of skilled trades). Marriage within the community was encouraged, and in instances where an outside marriage was contracted, the chance was good that at least one of the prospective spouses parents was a member of the Irish community.

Between the first year of the gold rush and 1870, San Francisco grew from a village of fewer than 200 buildings and 1,000 inhabitants to the tenth largest city in America, with a population of 150,000. Ten years after that, the number increased to a quarter of a million inhabitants, among which the Irish were the largest foreign-born inhabitants. In 1880, the Irish constituted one third of San Francisco's population.

The differences between the experience of the Irish on the West and East Coast were extreme. In the East, the Irish rapidly formed their own historical communities--neighborhoods that are traditionally Irish, like the South Side of Boston. They dominated occupations that are still regarded as Irish, like the police force and the firefighters. San Francisco was an open society, "open" meaning its public spaces and offices were not dominated by entrenched "historical" communities.(3) The population of San Francisco was more atomized and freer to define itself in the absence of the need to band together. In the rapidly growing, but largely undeveloped city some of the Irish were able to find for themselves the economic stability, creature comforts and commercial opportunities that had eluded them in New York and other points of entry for Irish immigrants. Throughout the mid-nineteenth century, the standard of living in the major eastern cities wasn't much better than the standard of living in Ireland. Opportunities for buying land and developing proprietary interests in the major commercial sectors that defined Americas economy at that time were limited. Tolerance for their culture (Catholic, rural, prone to questioning authority) was also similarly limited. Bigoted attitudes towards the rural Catholic poor manifested in degrading stereotypes and, occasionally, in armed attacks and church burnings from American born "nativists"--typically working class Protestants. Life in San Francisco, in contrast, was freer (although not completely) of anti-Catholic sentiment.

3.. It is worth stopping here to point out that an unclaimed city/land/ territory or any other spatial or geographical construct is a conceit based in and nurtured by the ideology of colonist thought, which the Irish had had plenty of exposure to. San Francisco was not, and had never been, empty. It had been home to at least 20 Indian tribes, most of which had been vaporized under the depredations of forced labor on the missions, foreign pathogens brought by the Spanish, and general dispossession of their lands.