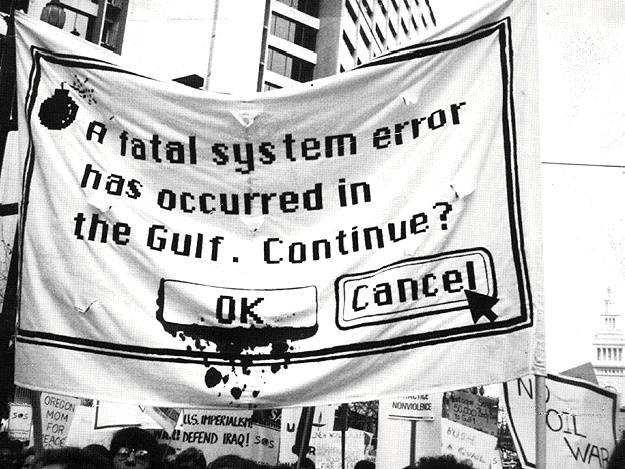 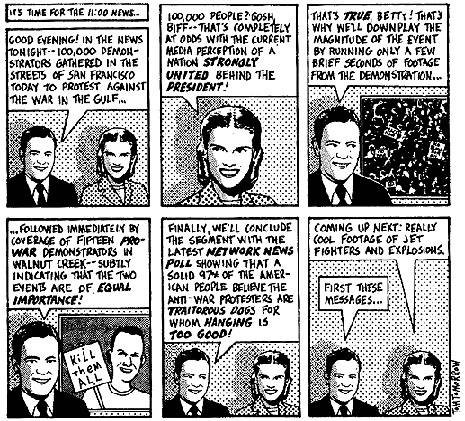 Government officials hate the chant "No Blood for Oil," and take pains to deny the linkage. But such denials mean less than nothing, and this stupid and immoral war really is, at bottom, about oil. Right?

Well, yes and no. The U.S. has long placed the Middle East among its "vital interests," and it's a safe bet that this has something to do with the 68% of the planet's proven oil reserves that lie beneath its bitter sands. But there's more here as well. The U.S. is the world's largest debtor nation, and its political domination of Japan, Europe, and the Third World is coming apart. Now, with the end of the "Soviet threat," the U.S. elites have lost their most valuable and reliable enemy. Gone is their favorite excuse for intervention in "underdeveloped" countries, gone the apparent necessity for huge Pentagon budgets, gone the ideological glue that bound Europe to the U.S.. Of course, the end of the Cold War also offers an opportunity for renewal and peace--but this is clearly not what the U.S. has in mind. Rather, the Bush administration sees the new world as one in which it can assert military power without fear of coming to blows with the Soviet Union. The end of superpower rivalry has made regional war all the more possible.

Enter "the new world order," a fine phrase for a protection racket by which the U.S. tries to exact economic concessions from other industrial nations while forcing them to finance its policing of the Third World. A key part of the racket is pressuring oil-producing countries to keep accepting weak U.S. dollars--not yen, deutschmarks or a new European currency--for their crude, thus helping to keep the dollar, and the U.S. economy, from going into free fall. Meanwhile, East-West conflict mutates into open North-South conflict, and the opportunity for a really new post-Cold War world fades into death and demoralization.

Oil plays the lead in all this for reasons of chemistry as well as history and economics. Like coal, the other major fossil fuel, oil is an extremely concentrated source of energy. Without coal there would have been no steam engines, and capitalism as we know it would never have evolved; without oil there would be no auto-industrial age. Maybe we'd be better off, but that's not the point. The economy we live in is built on the fossil fuels, and the U.S., having chosen militarism instead of real change, would rather kill untold thousands of people than face the end of the "American Century," the obsolescence of the oil/coal infrastructure, and the need for an ecologically sane society.

Environmentalists love to trash Americans for their automobile addiction, but in truth we get few choices. With the cities structured as they are, you have to be an eco-saint to live without cars. There are lots of alternatives, of course, but they require democratic social planning, and a clean break with the fossil-fuel economy. It's a prospect "our" leaders regard as the next thing to communism.

It was already clear in 1973, with the first "oil shock," that the U.S. economy was dangerously dependent on Persian Gulf oil. Some small progress was made in the Carter years, but it was easily undone--Reagan's remodeling of the White House included tearing out the solar panels that Carter had installed. Today, we need to recognize that kicking the Oil habit is unlikely to occur while other things remain equal. This is an oil war, but it takes more than oil to go to war. Likewise, it'll take more than fuel-efficient cars to secure a post-oil, post-military, post-greenhouse-effect world.

The U.S. is falling apart, yet its elites seem unable to shake the habit of reflex militarism. Even if all goes according to plan (and it won't) we all lose big-time. Worse, each step along this road--and this war is a very big step--closes more options. There is another road, but we may have to jump the divider to get to it.