The International Hotel was a high-class hotel in the 1800s. In 1907 it was rebuilt after the original hotel was destroyed by the 1906 earthquake. The hotel was the central focus for the Filipino community. It was situated in Manilatown, a 10-block area that was home for over 10,000 Filipino immigrants. In the 1960s, the financial district started expanding, and the low rent hotels, restaurants, pool halls, barber shops and dance halls all crumbled under the wrecking ball.

International Hotel at Kearny and Jackson, with Financial District looming to its south.

The Eviction of the International Hotel

August 4, 1977: Two people are descending the staircase to Kearny Street. One is a young woman, weeping, holding a bundle in one hand, supporting an old Chinese man who had a cat under one arm. Both were weeping. The sidewalk was packed with sheriffs in riot gear; lines of police cars and fire trucks packed the street. Mounted troopers kept a large crowd on the far sidewalk as the sun rose. I was limping and bruised, having been battered by clubs, knocked out of the crowd by a mounted charge, and then being crushed between two horses and stepped on by a third. The crowd of a few hundred people mostly looked on in silence; the RCYB (Really Confused Young Bourgeoisie, a Maoist grouplet) chanted “We're Organized! We're Disciplined! We Will Win!”—a chant given lie by the actual eviction. 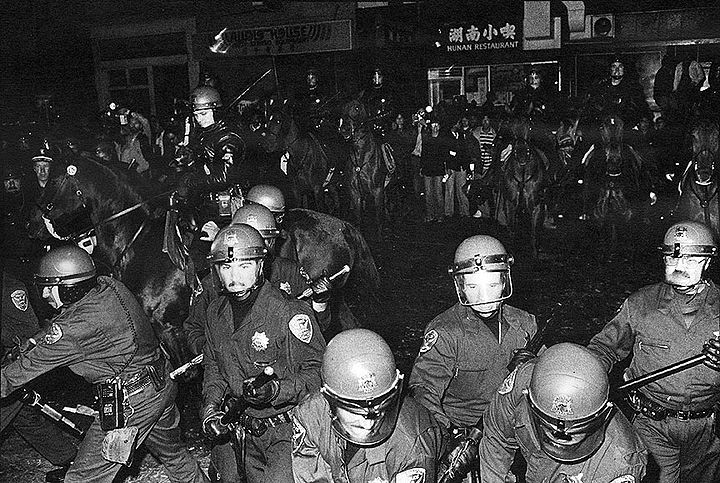 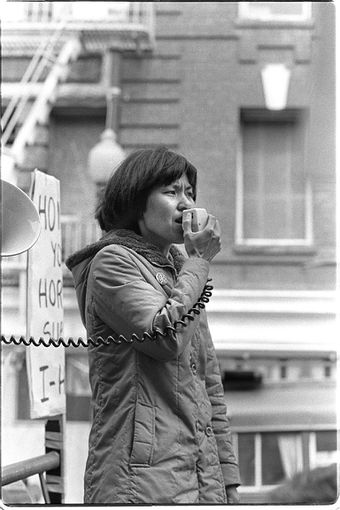 This was merely the concluding chapter of a saga that started in 1968 when tenants of the International Hotel were told to be out by January 1, 1969. The I-Hotel (as it was sometimes called) was lodging for many Filipino and Chinese men. I started to say “old men,” but that isn't accurate. Although they may have been old when I met them in 1976, many had lived in the hotel for decades. Some had lived there during or right after World War I when they were discharged from the Navy, where they generally worked as stewards and cooks, laundrymen, etc.. Many worked on the waterfront, or as farm or cannery workers, and lived in the Hotel, where they stayed on after retirement on meager pensions or Social Security. The Hotel, at Kearney and Jackson was one of the last remnants of Manilatown, a smaller and ethnically distinct cousin to Chinatown, whose border was directly south across Kearney. Most of Manilatown had been destroyed by the advancing financial district in the 1960's and ’70s -- the area had more then 40 residence hotels in the early ’60s, and less than 10 by the mid-’70s. The I-Hotel seemed destined to follow the rest into Redevelopment Oblivion. By the mid-’70s some had left, but others were staying, fighting both in courts and in the streets. 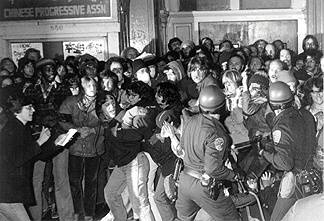 The building was owned by a consortium including Walter Shorenstein, a local real estate mogul, and some foreign investors (apparently Thai money). Their initial plans were to tear down the hotel and build a multi-level parking lot. These were changed in the face of opposition from tenants, neighborhood activists, and some labor unions, but the I-Hotel was still destined for eviction.

Some attempts were halted by legal maneuvering, others by street protests. Because an eviction notice had to be posted on every entrance, protests were organized that blocked the sheriffs from posting notices. In at least one case, the demonstrators formed three concentric circles, each made of a pairs of people arm-in-arm. The innermost circle went in one direction, the middle circle in the opposite direction, and the outermost circle in the same direction as the inner circle. When the constabulary attempted to break through the moving circles they first hit the outer line, which pushed them in one direction, then the next line, which pushed them another way, and so on. Eventually the sheriffs left. 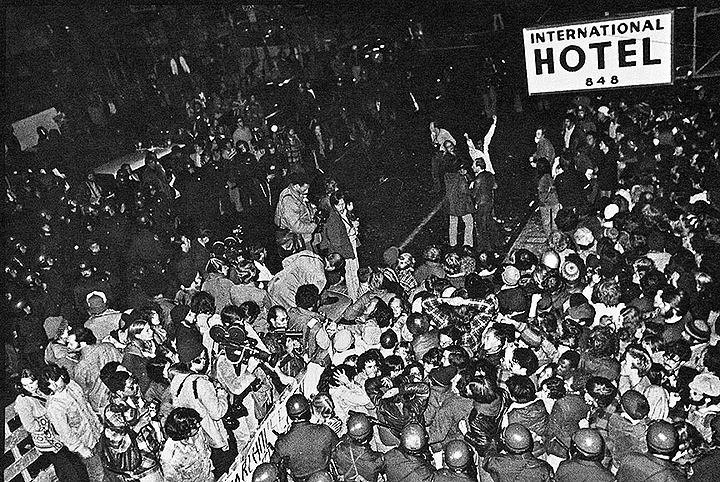 Indeed, opposition to the eviction was so broad that the head of the Sheriff Department, Richard Hongisto went to jail for a week on a contempt of court charge rather than order the eviction. Indeed, in The spring of 1977, the Good Sheriff gave a talk at the University of California at Berkeley in which he drew three circles on a chalkboard and labelled them “Feudalism,” “Capitalism” and “Socialism.” He then drew an arc from the first to the second, and another arc from the second to the third. On the second arc, about halfway between the “Capitalism” and “Socialism” circles, he put a small “X” and explained that that was where we were in history, and he saw himself as a part of the forces moving along that arc to socialism. 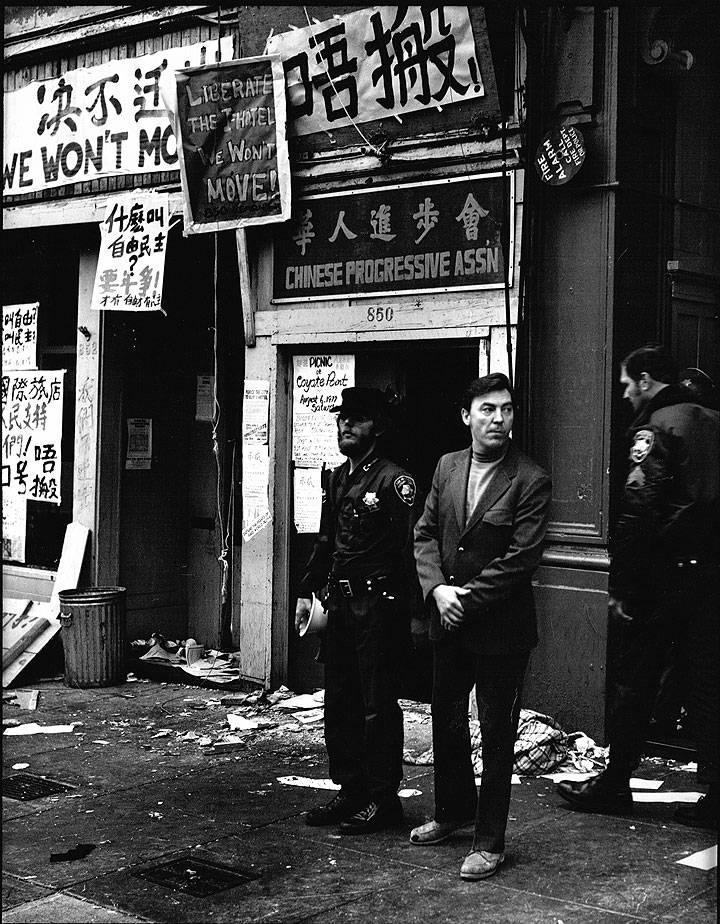 During this same spring, there had been several attempts at arson at the building, so night-time watches were established. There was a CB set up in the basement and a few cars with CBs parked around the hotel watching for any suspicious activity. There were a half-dozen or more people sleeping or reading in the basement who were to provide assistance in the event of arson, or to try to hold the doors in the event of a police attack while the volunteers mobilized the phone tree.

Eventually the legal battles were exhausted and the politicians made themselves absent (sometimes literally; Mayor Moscone left town so as not to be present). Perhaps through friends in the sheriffs it was learned that the eviction would be carried out in the pre-dawn hours of August 4, 1977.

For reasons that were never clear (at least to me), the organizers had decided upon a different tactic than the mobile picket lines used before. Now, all the demonstrators were to link arms with the people next to them and then grab the person in front of them around the stomach with hands clasped. The idea seems to have been based on the assumption that the sheriffs would attempt to grab people and drag them away from the lines. There were thousands of people involved; we formed a barricade 3-4 layers deep all along the front and two sides of the building. 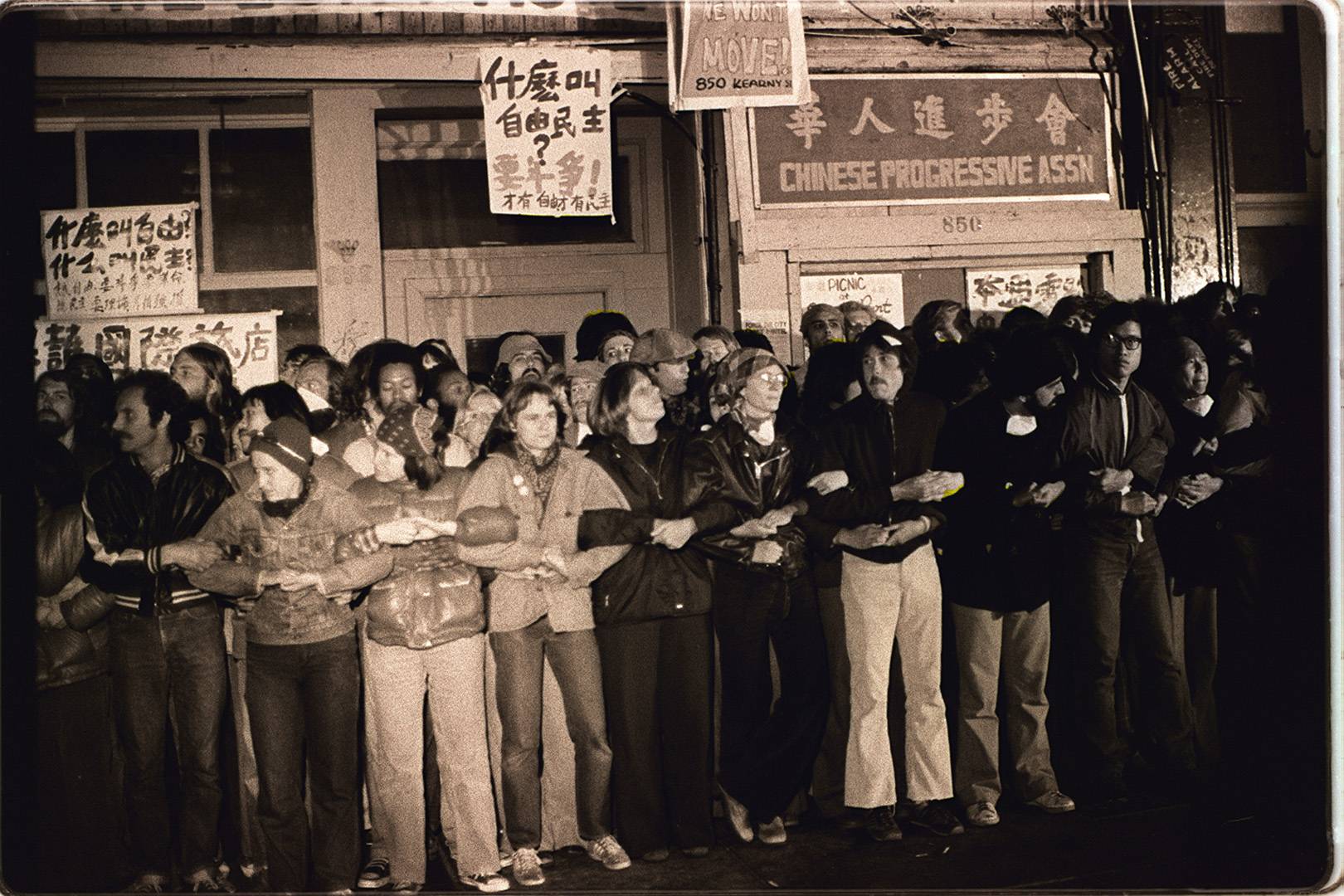 Protesters lock arms to block the eviction of the I-Hotel tenants, August 4, 1977.

When the sheriffs showed up, they first cleared the street of rabble (too bad we didn't block it with junker cars chained together) and then brought in their buddies, the Fire Department, who used their ladders to put cops on the roof of the building. The defenders attempted to block the ladders, but obviously hadn't counted on the enormous power of those ladders. Meanwhile, the mounted troopers were riding straight into the crowd and beating people with batons -- clubbing them in the head or stabbing them in the belly and groin. Because people were holding each other's arms we were defenseless -- you couldn't even raise your arms to protect your head. In the end, this miserably passive tactic caused enormous pain and suffering while proving worthless to the defense of the building.

The eviction was over by dawn, which had been an imperative for the city; they didn't want to be blocking the financial district when business cranked up. The forces of law and order went through the building smashing doors and plumbing fixtures and furniture. Some of the tenants had their personal belongings (including checks, money and papers) stolen by the sheriffs. There were guards posted to prevent any attempt at re-occupying the building. The owners in their unseemly haste to tear down the I-Hotel caused one last ruckus as they pushed the scab (de)construction company to demolish the building without a permit. This lead to a memorable scene of a bulldozer operator trying to knock down a wall and being stopped by a policeman who had to draw his piece to stop the worker (who ended up in jail with some pro-hotel demonstrators who had been busted in the same action). The building was eventually torn down, leaving a gaping hole to this day. The activists went on with their activities, the politicians continued to help business help itself, and the tenants were scattered. Manilatown was no more, and now the largest concentration of Filipinos is to be found in Daly City.