How Many Cliff Houses?

Originally published in Outside Lands magazine, Vol. 14, No. 2, April-June 2018, the San Francisco history magazine from the Western Neighborhoods Project 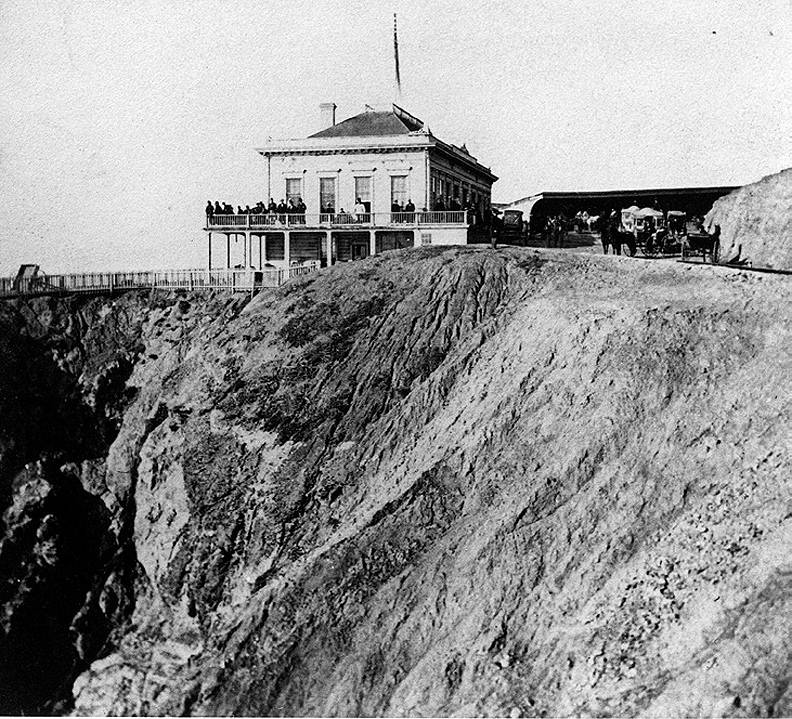 A never-ending argument among local historians and San Francisco history buffs concerns the number of Cliff Houses that have stood overlooking Seal Rocks. Some say three, others five, some as many as six. It all comes down to how one defines a structure, and at what point does it change so completely that it becomes a totally different building.

The history of the Cliff House is pretty straightforward, and quite melodramatic. Originally built in 1863, it was enlarged in 1868, blown up in 1887, burned down in 1894, rebuilt in 1896, burned again in 1907, and rebuilt one more time in 1908. Seems straight­forward enough, but not included in this brief time line are the numerous remodelings the buildings underwent during their precipitous years hanging off the cliff face.

Also muddying the historical waters is the assertion by some folks that the Cliff House actually goes back to 1858—although they admit it was a different building in a different location and had a different name. It didn’t help matters that, for literally decades, the Whitney Brothers displayed a large neon sign on the Cliff House reading “SINCE 1858.” 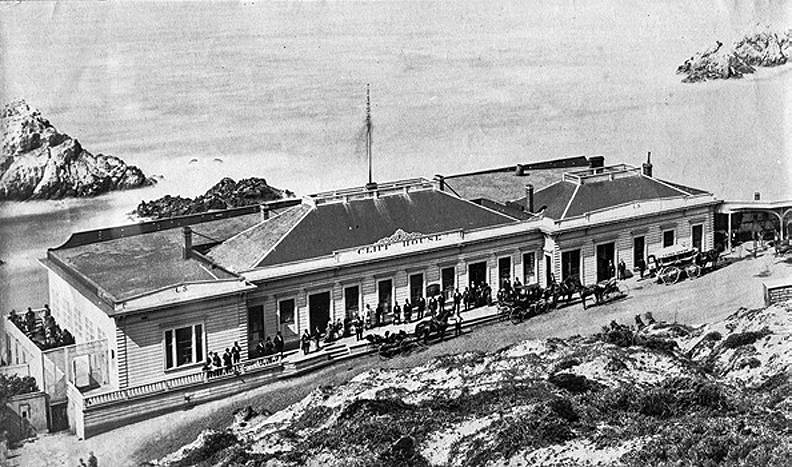 Here’s a slightly expanded version of the points listed above, along with a little historical context.

1858: A roadhouse calling itself Seal Rock House opens at the north end of Ocean Beach, snuggled against the bluffs of the future Sutro Heights, but nearly a quarter mile from Seal Rocks. It would change names often over the years, sometimes being called Long Branch House, Long Branch Hotel, then Seal Rock Hotel. However, no matter the name, it was not the site of the future Cliff House.

1863: Original Cliff House opens at the furthest west tip of land overlooking a popular destination for San Franciscans: the Seal Rocks. A relatively small structure, it was essentially a hipped-roof building with a rectangular footprint and verandas on three sides, topped by a small “widow’s walk” balcony and a towering flagpole. This first incarnation of the Cliff House didn’t last long. A victim of its own popularity, it was completely rebuilt and expanded in…

1868: During the 1868 remodeling, the Cliff House owners enlarged it to approximately four times its original size, adding two wings that enveloped the original rectangular structure, and leaving only a portion of the original facade on Cliff Road exposed.

These were odd additions. The north wing was a sort of a “mini-me” version of the original Cliff House, complete with scaled down footprint, hipped roof and widow’s walk.

The other, larger addition was an L-shaped wing surrounding the entire west and south sides of the building. Its architectural style was totally different from the original 1863 Cliff House and the north wing. Instead, the L-shaped wing had a flat roof with a raised parapet. Its larger size permitted greatly expanded viewing verandas. 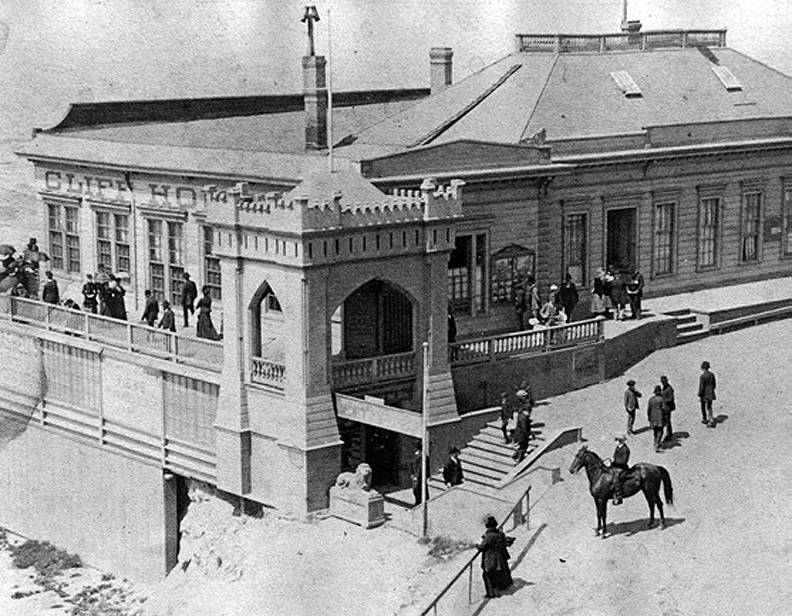 Circa 1883: Adolph Sutro purchased the then-seedy Cliff House in 1883 and installed a new manager to clean up the roadhouse. About this time, a minuscule castle-like addition appears at the southeast corner of the structure. It’s assumed Sutro ordered this addition built, but documentation is elusive. With its crenelated parapet and pointed-arch openings, the little addition had a distinctly European feel to it—some have said Norman. It also eerily presaged the much more grandiose “Victorian” Cliff House that Sutro would build in the 1890s. 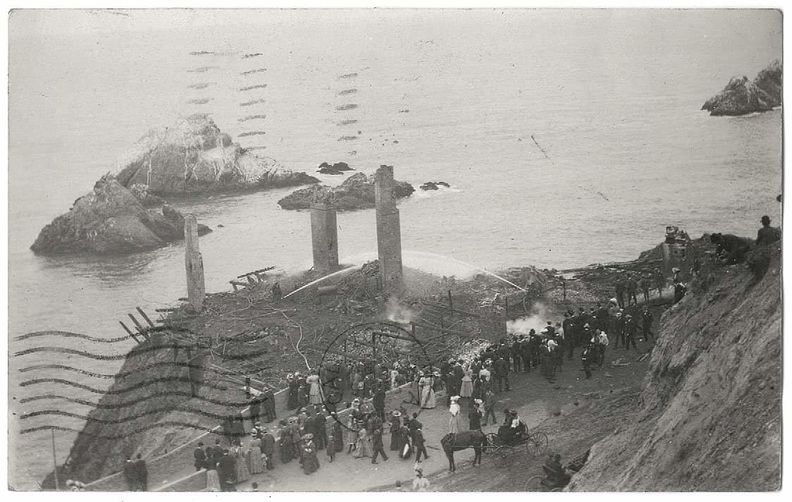 1894: On Christmas day, the original Cliff House with its various modifications burned to the ground. Adolph Sutro wasted little time before announcing plans for a vast new Cliff House on the same site. Construction on his seven-story “Hotel de Cliff House” takes over a year, and it opens in…

1896: Called the “gingerbread” or “Victorian” Cliff House, Sutro’s elaborate structure was the shortest-lived of all the Cliff House buildings. Opening February 1, 1896, the wood frame building remained essentially unchanged during its eleven year existence. 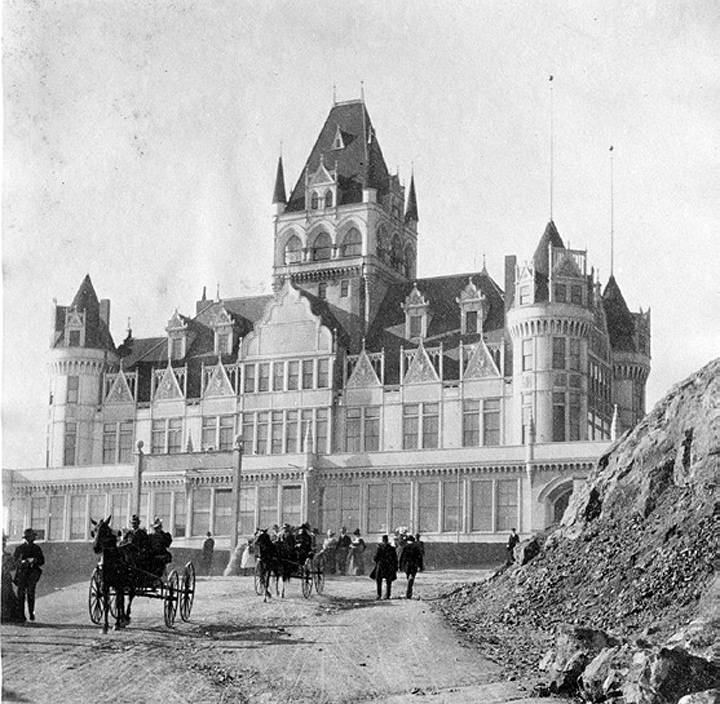 The only modifications that historians have identified involve the continued loss of exterior filigree, some alterations to window openings, and the addition of several chimneys. This structure would also be destroyed by fire in…

1907: On September 7, during interior renovations, Sutro’s version of the Cliff House burns to the ground, leaving only a few brick chimneys standing amid the charred rubble. Sutro’s daughter and executrix of his estate, Dr. Emma Sutro Merritt, decides to rebuild the Cliff House once again. This time, though, given the flammable history of the site, she elected to construct her Cliff House out of reinforced concrete. It was completed and opened on July 1st…

1909: This is essentially the same structure that exists today, although rebuilt several times. Designed by the Reid Brothers, who had also designed the Fairmont Hotel, this simple neoclassical-inspired structure was more similar in scale to the 1860s Cliff House than its whimsical 1890s predecessor. During the next 28 years, its exterior underwent only minor changes such as the addition of a portico and bar wing, additional outdoor lights, and the appearance and removal of latticework decor. Bigger physical change would occur in… 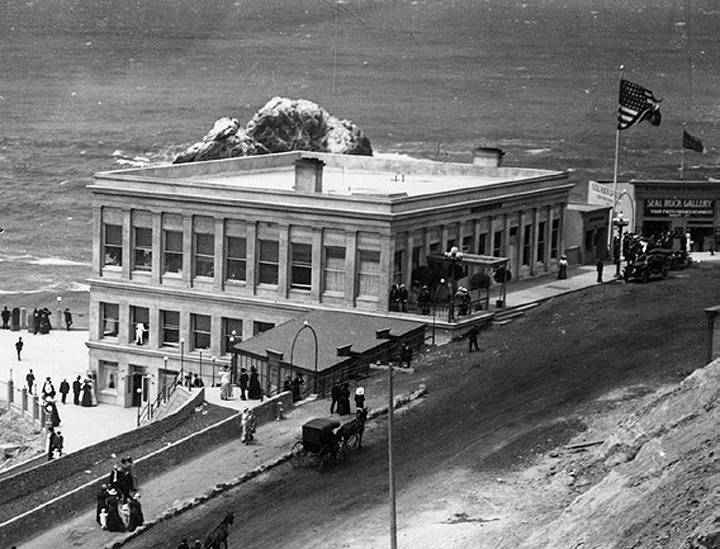 1936-1937: The Whitney Brothers, owners of nearby Playland at the Beach, purchased the Cliff House from the Sutro Estate in late 1936 and upgraded and remodeled it as an “upscale roadhouse.” The most notable exterior change was the addition of large illuminated letters spelling out CLIFF HOUSE on two sides, facing towards Point Lobos Avenue and Ocean Beach.

By the post-World War II years, though, the entire structure was looking a bit tired, so the Whitneys undertook a major remodeling project during 1949-1950. Clad in a stylish redwood and featuring a new fourth story dining room, the “mid-century” Cliff House opened in… 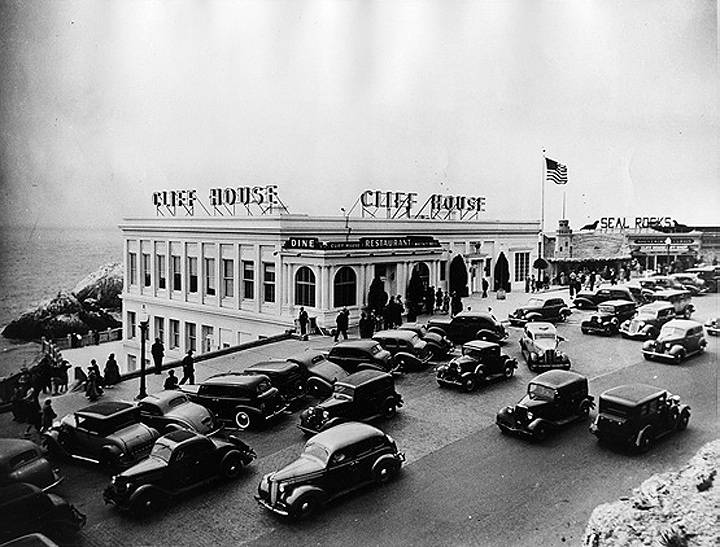 1950: This is the Cliff House most of us Baby Boomers remember, with its towering (false) chimney, “moderne” detailing, and cozy bar with big windows looking at the ocean and Seal Rocks. The original 1909 building commissioned by Emma Merritt was still there, but buried under the siding, leaving only the west wall exposed. In fact, unless you walked onto the terrace to see the surviving wall, you likely would have thought this was an entirely new building. 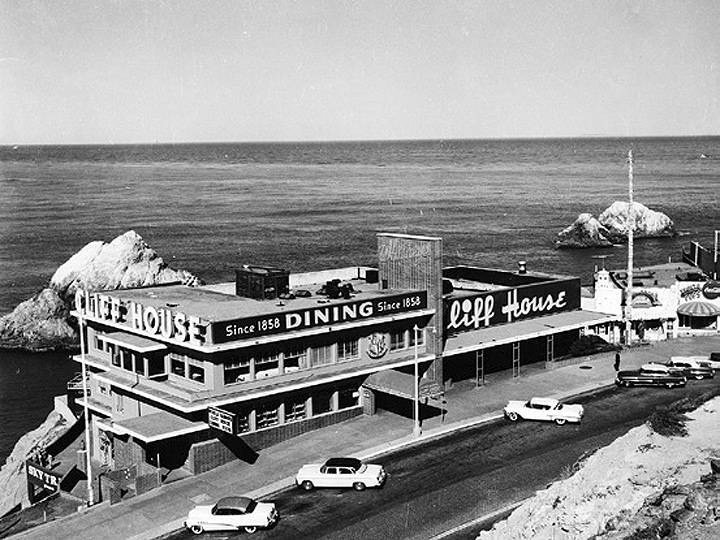 Pacific fogs and salt spray take their toll even on redwood and concrete, and by the turn of the twenty-first century it became obvious the Cliff House need a complete reconstruction. Due to decay, the top story dining room, added in 1949-1950, would have to go. There were also accessibility problems that desperately needed to be addressed. During the process of surveying the building, architects realized the core 1909 structure beneath the redwood was still structurally sound and could be upgraded to modern standards. Demolition and reconstruction took more than a year, but the reborn Cliff House opened to visitors in…

2004: Today’s Cliff House isn’t a restoration of Emma Merritt’s, but rather a rehabilitation of that structure. It also includes a new wing to the north of the historic structure called the Sutro Room, which made up in square footage the demolished third story. During the project, many exterior details of the original Cliff House were restored, though, including long-lost cornices, dentils, and window openings. Also, a slightly smaller version of the illuminated 1930s CLIFF HOUSE sign was placed on the building facing Point Lobos Avenue. 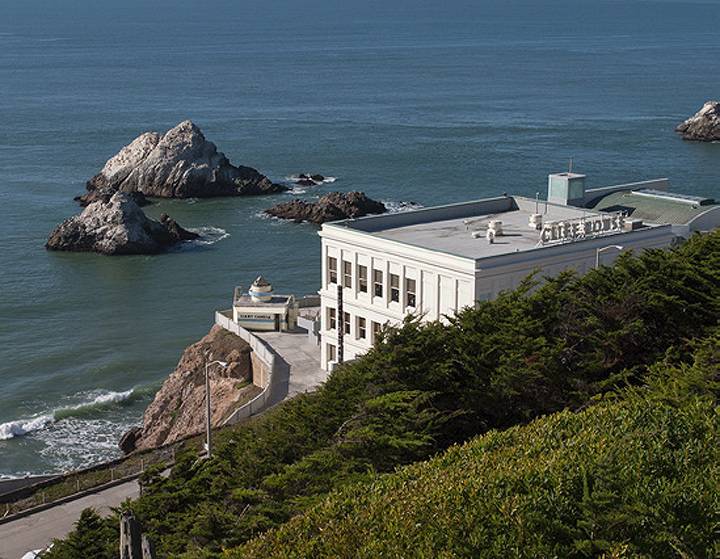 So, how many Cliff Houses?

This is where I make enemies. I say three Cliff Houses. To clarify, three distinct Cliff House structures, but with nu­merous exterior facades and alterations over the decades. Here’s how I count ‘em:

I realize there are some folks who will argue passionately that the 1868 and 1950 remodelings were so drastic that the end product in each case was a new structure. My response to this is two-fold:

First, I checked with some architect friends. They agreed with my contention that additions and facade changes tacked onto a core structure do not turn it into a new building. Structures evolve over time as tenants continually adapt and remodel them, but unless completely torn down and replaced, it remains the same building.

(You can test this theory yourself. Remodel your home, add an addition or two, slap on a new facade, and then have it reassessed by the county. The tax assessor will not consider this a “new” structure, but will continue to use its original construction date—albeit with a hefty increase in assessed value for your improvements.)

This is the type of debate that history nerds love to thrash out, preferably over a Steam Beer or an Irish Coffee at the Cliff House’s still cozy bistro bar.

But in the end, it’s a kerfuffle in a teapot.

Architectural definitions and remodelings aside, for 155 years the Cliff House has served tourists and locals with a timeless view of an apparently endless ocean. See you there.