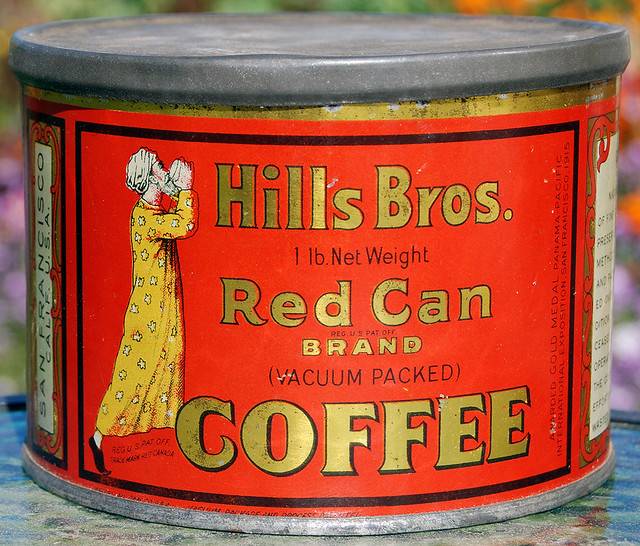 The original Red Can one-pound can, the backbone of Hills Bros.' massive expansion of market control over consumer coffee sales in the early 20th century. 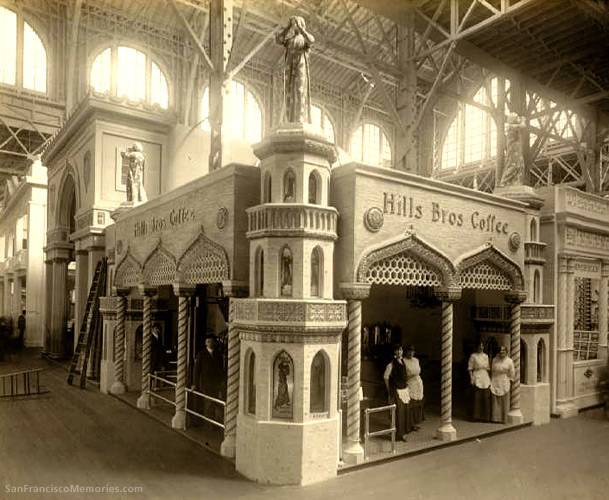 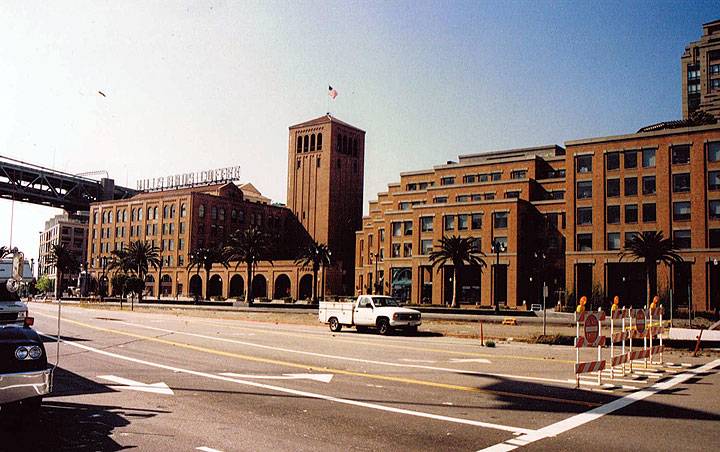 San Francisco has had a close relationship to El Salvador that got started in the late 19th century. It’s a relationship of commercial exploitation in the receding shadow of slavery, but where the brutal treatment of indigenous workers was key to the accumulation of wealth in San Francisco. Benjamin Bloom, a son of one of the founders of Healdsburg in Sonoma County, founded the Banco Occidental in Santa Ana, El Salvador, in 1889, a year after millions of coffee-growing slaves in Brazil were finally legally emancipated. This set the stage for a steady increase in coffee growing in Central America, and the new bank helped finance the rapid expansion of plantations in El Salvador.

The key player in San Francisco became Hills Brothers Arabian Coffee & Spice Mills, which developed from a small grocery store owned by Austin Jr. and Reuben Hills in 1873. San Francisco coffee imports had been dominated by J.A. Folger since just after the Gold Rush, but with the new venture, the Hills Brothers were able to grow quickly. A key development at the dawn of the 20th century came when Hills Brothers began testing incoming coffee beans in terms of how they tasted and smelled “in the cup” rather than just how the beans looked. Their new approach took the industry by storm, and soon every importer was imitating that approach. Combining new technologies of roasting and canning with the sudden expansion of consumer culture in the early 20th century, coffee roasters became the backbone of changes in retail food sales.

Moreover, San Francisco took advantage of World War I to seize the initiative in controlling the coffee trade in Central America, permanently gaining the upper hand over European (especially German) importers and those on the East and Gulf coasts too. This was helped in no small part by a long-time local business, the Pacific Mail Steam Ship Company, who had dominated coastal and trans-Pacific trade since the mid-19th century. Remarkably, Pacific Mail offered to transport Salvadoran coffee to San Francisco roasters not only for free, but they paid Central American growers directly to control their shipments. By the end of WWI, San Francisco merchants were buying a million bags of Central American coffee a year, five times more than a decade earlier.

While this boom was underway, the system of producing this vast quantity of beans had been perfected by various local plantation owners. Prominent among them was James Hill, a British immigrant who had settled in El Salvador and helped systematize the production on his steadily expanding network of coffee plantations. The key to his success was the ruthless implantation of monocultural production, building on the seizure of commons lands that preceded his arrival in the country. Anywhere on his lands that he found fruit trees or food of any sort growing, he systematically destroyed it. The key to having enough people to work on his labor-intensive plantations was to control their food supplies. Twice a day he provided beans and tortillas to his workers, carefully measured and allocated, and for this “reward” to be sufficiently motivational, the local population had to be kept hungry. Hill and other Salvadoran land barons, having taken and converted vast areas of the country that had been communally farmed for centuries, funded a growing national guard and police force to maintain their control over the indigenous population. This calibrated system of inculcated hunger and food manipulation, largely implanted just years after the Brazilian slave system was finally the last one to be abolished in the world, reproduced a harshly coercive labor regime that looked more like slavery than free wage labor—and not coincidentally, Brazilian slaves and Salvadoran agricultural workers were both producing a growing quantity of coffee to be consumed by an expanding and overworked industrial working class in the Global North. (Most of this account is derived from Coffeeland: One Mans’ Dark Empire and the Making of Our Favorite Drug, by Augustine Sedgewick, Penguin Press, New York: 2020)

As Central Americans labored under the harsh regimes imposed and controlled by U.S. corporations like United Fruit or their political puppets (“banana republics” is the term that came to characterize Central American governments during this time), revolutionary opposition began to percolate. By the mid-1920s, even after more than a decade of U.S. military occupation, Nicaraguans rose up, led by Augustino Sandino, in a powerful effort to overthrow the local puppet government and expel the Marines. In El Salvador, radicals were organizing too, ultimately led by Farabundo Marti, and their own uprising against the brutal conditions of life in Depression-era El Salvador erupted in early 1932.

This history seems far removed from our everyday lives in the third decade of the 21st century. But it’s not. In Unforgetting: A Memoir of Family, Migration, Gangs, and Revolution in the Americas, Roberto Lovato, who grew up in San Francisco’s Mission District at 25th and Folsom, tells a frantic, funny, poignant, gut-wrenching, and essential story that connects his father’s survival of the genocidal Matanza in 1932 El Salvador to the ongoing saga of gangs, borders, violent mayhem, and Civil War in El Salvador, Los Angeles, and San Francisco today. It’s a rare book full of confessional insights into his own political and social evolution, alongside his troubled relationship to his distant father. The blank spots that shape his own traumatized childhood and ongoing psychology gain clarity as he bounces back and forth in time and space, until finally the long violent history is uncovered, rooted in social relations set in motion long ago. Not only did the militarized violence imposed against peasant rebels in the 1930s metastasize into the gangs and routine brutality on borders today, but the defeat of the revolution by mass slaughter in 1932 set the stage for a hard push by SF-based Hills Bros. to dominate the US coffee market. Thanks to the cheap labor reinforced by terror, tons of cheap coffee was harvested in the 1930s and bought exclusively by Hills Brothers in San Francisco, who used these suddenly inexpensive beans to embark on a cost-cutting campaign in the Depression to take over as much market share as possible.

Already in the post WWI era, the American grocery business had been reorganized around coffee. Cheap coffee from Brazil had been instrumental in helping A&P develop its Economy Stores and wipe out countless neighborhood grocers. Soon others entered the market like Safeway, Kroger, and National Tea, and by the mid-1920s each chain was using cheap coffee to attract shoppers and break the hold of local stores on food sales. By 1929, small neighborhood grocery stores had lost about half of their coffee business.

Hills Bros. originally shaped their marketing campaigns around high quality and high prices to distinguish themselves from the cheap chains. Before WWI, Hills Brothers customers had almost a thousand different choices in blends, grinds, quality, price, and quantity. But within a decade the company had purged all the many products they were selling and had reduced everything to the high-grade, vacuum-packed “Red Can” of coffee (produced with beans from El Salvador).

As Brazilian protectionist measures led to a rise in the price of Brazilian coffee exports, Central American coffee producers expanded production to gain market share. By the mid-1930s, after years of rock-bottom prices induced by the Depression, Hills Bros. focused their coffee buying on the beans growing on the Santa Ana Volcano in the heart of El Salvador. With their advanced marketing and technical skills developed in their San Francisco bayshore headquarters, they imposed new standards on growers in El Salvador. They convinced James Hill (no relation) to stop drying and polishing his beans, and then Hills Bros bought more than two million pounds from him. Armored by vast quantities of cheap, high-quality El Salvadoran coffee produced by terrorized survivors of the massacres, Hills Brothers embarked on an aggressive cost-cutting and market-expansion campaign, eventually pushing their retail distribution into the midwest and to the east coast by 1940. The company became the largest independent coffee roaster in the U.S., selling around 50 million pounds.

Meanwhile, Salvadorans continued to emigrate to San Francisco along with the rich product of their country. San Francisco’s Latino population grew steadily from the 1930s onward, with major pulses of refugees arriving from wars in the late 1930s and again in the 1980s when Reagan’s wars against the Nicaraguan Sandinistas and the FMLN in El Salvador were at their peak. Puzzling to some, it’s obvious why the local population has long been more Central American than Mexican, as the many pupuserias and other eateries with Central American cuisine attest.

The dramatic changes in the world coffee trade in the late 20th and early 21st centuries have diminished the role of Salvadoran and Central American coffee, but by no means ended it. While coffee no longer arrives in 200-lb. sacks along San Francisco’s waterfront, where it was offloaded into nearby roasters that filled the Embarcadero with the scent of coffee, the proliferation of gourmet coffee stands and the thousands of baristas who sling espressos and lattés for the 24/7 economy of tech and finance workers, show that the world economy is as dependent as ever on the exploitation of cheap labor producing the irreplaceable coffee bean.