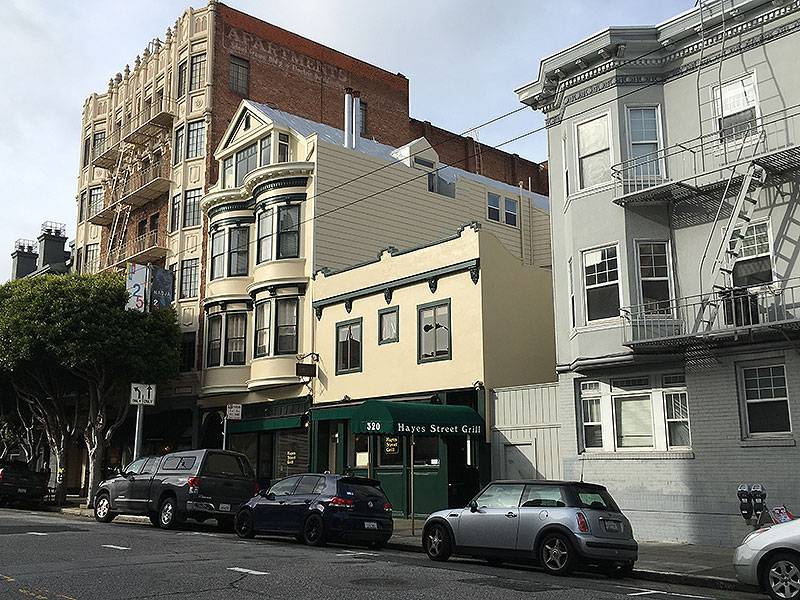 Who knows why people requested a contracting company named Wonder Woman Electric? Sometimes it was just to see women working as electricians; we were exotic. Sometimes it was because people preferred to hire women to work on their houses. We did exploit the stereotype that women are easier to work with, cleaner and neater (we made a special effort to keep our worksites clean). Sometimes we worked for general contractors who knew our work and hired us as a subcontractor. In that case, the building owner, who might never have hired women, would be shocked to see us on the job. And sometimes the client thought they could pay us less because everyone knows women are worth less than men. Sometimes they thought our labor should be free and they didn’t have to pay us at all.

Wonder Woman Electric found its clients through word of mouth mostly. I joined the collective in 1977 and immediately began to form stereotypes of clients. The working class folks who lived in the Mission and Excelsior neighborhoods of San Francisco, the ones who were scraping up the cash for the remodel or just to feed their kids, always paid their bills on time. You had the feeling that the bill got paid even if dinner was rice and beans for the next month. It was the rich clients who tried to skip out on paying. This amazed me. It didn’t take long to realize that rich people as a class generally had no regard for the value or skills of tradespeople. They believed we were looking for any opportunity to rip them off. Lawyers were some of the worst. One guy ran a business advising rich people how to avoid paying their contractors altogether. How did they get that way? I tried to understand the psychology but finally gave up. Why fight with these people to get paid? Maybe it was best just to avoid them.

But we were listed as a licensed electrical contractor in the San Francisco phone book so we got calls from all over the city. Much of our work was residential and in poorer parts of town, but occasionally a commercial job or a job in a wealthy neighborhood would come our way.

We were delighted when Wonder Woman signed a contract to do the electrical remodel of what would be a new restaurant, the Hayes Street Grill. We knew that the owner of the new restaurant was a locally famous food critic and we looked forward to working for a female business owner. The job included an electrical service upgrade for the building, which meant digging under the sidewalk to run a rigid pipe to the power company’s street box and installing a 200 amp commercial main disconnect.

Our founder, Susanne di Vincenzo, took the lead on the job. She was smart with a degree in physics from Columbia, and she knew how to read the electrical code. She had learned the electrical trade in the slums of New York rerouting electricity for a Puerto Rican squatters’ movement. At that time, if you were female, the above-ground avenue toward learning the electrical trade was closed to you.

The building was a three-story wood-frame Victorian with a steep gabled roof, a residential building that we workers would convert into a restaurant with a commercial kitchen, essentially replacing electrical, plumbing, heating and air movement systems—the guts.

Upgrading the electrical service would be the biggest job, but we would also be pulling new circuits for big kitchen equipment and a new lighting system. Much of our work would involve bending and installing electrical conduit in the unfinished basement, then drilling up through the floor to the kitchen. On jobs like this there are often no plans. The contractor designs the electrical system and then builds it. You get the manufacturer’s technical requirements for each piece of equipment, then calculate the size of the wire and conduit needed. 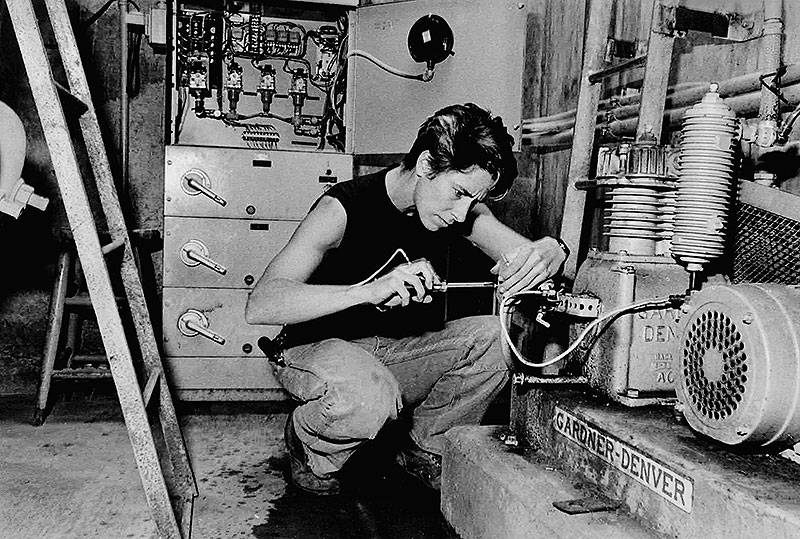 Molly Martin at work in her Wonder Women days.

We started with the service. Jean, Sylvia and I crouched in a three-foot high corner of the dirt crawl space where the service pipe would enter the basement as Susanne gave us a code lesson on figuring the required size of a commercial electrical service. Part of this job would be disconnecting the existing service conductors and temporarily reconnecting the new wires live, a dangerous prospect. But we were glad not to have to do it while standing on a 30-foot ladder, the usual procedure. Electricians are more likely to die from falling off a ladder than from electrocution.

Normally there’s no reason for the electrician to climb on top of the roof and I can’t remember why I had to get up there but at one point I found myself straddling the peak. I was creeping along as carefully as I could, watching the sheet metal workers installing the big air intake and exhaust structures that ran from the kitchen to the roof on the outside of the building. Those guys had safety harnesses but I didn’t. Wonder Woman Electric had no harnesses, nor any safety equipment (I used my own respirator to protect my lungs while working in attics and crawl spaces). Instead, we should have taken job safety more seriously. In the three years I worked with the collective we had two serious fall accidents that could have been prevented if we’d had a safety program.

On the roof I tied a piece of wire around my waist and secured it around the brick chimney thinking it might break my fall. Just then the lineman’s pliers I was carrying slipped out of my tool pouch and bounced with dramatic effect off all the surfaces on the way down to the bottom of the light well forty feet below. It was suddenly easy to imagine losing my grip and tumbling to the ground. But it was a good thing I didn’t fall; that wire could have cut me in half. It was just one of the stupid things I did as an electrician that could have killed me but didn’t.

I think it was here that I began to understand the concept of Machisma, the female version of Machismo. Female construction workers all know that men in the trades think taking risks on the job is somehow connected to their manhood. Risky behavior is what separates the boys from the girls in the minds of the macho guys. The construction companies’ owners probably loved the macho attitude, as they didn’t have to worry about providing personal protective equipment to their workers who thought concern for safety made you a pussy. In some ways the female version was worse—it was self-inflicted. We felt we had to be better than the men in every way, and not be afraid to take risks on the job. The five-woman crew of WWE enforced the macha credo by bucking each other up and sometimes by taunting each other when faced with a frightening task. We also helped each other in risky situations, probably more than the men did. But I was working alone on the roof. My macha attitude melted away as I imagined myself following that hand tool down to the ground. I managed to complete my task and climb down without mishap but I was shaken.

It was our policy to write into our contracts a payment schedule based on work as it was finished. We set the main service and waited for a scheduled payment stipulated in the contract. No money came through. Why, out of all the subcontractors on the job, were we not getting paid? We never met the owner but she had no problem with our work as far as we knew. She did have partners in the enterprise and perhaps they were more than silent partners. Perhaps it was one of them who deigned not to pay us.

Susanne was the “forema’am” charged with dealing with the owners and she had to go through a general contractor. So when the first payment did not materialize after several weeks, Susanne pulled us off the job and cancelled our permit. We had not finished the electrical service, a technical part of the job that requires a contractor’s license and knowledgeable crew. The power company, Pacific Gas and Electric, would not connect the service to their grid unless it had a green tag signifying it had been permitted, inspected and signed off by the City.

Some time later that payment came through, we figured because they learned they had to pay us in order to get the inspection and green tag. In the basement we discovered that the owners had hired an unskilled electrician to finish the interior job, apparently because they thought our bid too costly. He was likely unlicensed and had done the work without a city permit. No inspector would have let this sloppy work pass. It was done in conduit (a requirement for commercial work) but this guy had never learned how to bend pipe. He had run conduit all around the basement using poor workmanship not up to our standards or basic code requirements. We worried that his work would reflect on us, as one permit had been issued to us. We also worried that his poor work could cause a safety hazard in the restaurant. The purpose of the electrical code is to address safety.

How could we register our discontent? We decided to use indelible ink to write on all the conduit “WONDER WOMAN ELECTRIC NOT RESPONSIBLE FOR THIS WORK.” When the owners saw our handiwork they were not happy but they probably figured no one would ever go down into that unfinished basement. We got our final check for the service installation and vowed never to work for these people again.

The restaurant opened in 1979 and today remains a destination for affluent opera goers. No doubt the poor pipe work is still there. I wonder if our remonstrations were ever painted over. And I wonder about the integrity of the interior wiring in the walls. Did that unskilled electrician who didn’t know how to bend pipe know how to do anything else? Did he have a license? Did he pull a permit? Was his work inspected? Did he get paid?