By the mid-to-late 1960s, the sexual revolution in San Francisco was well underway. This was a period in which individuals were freely expressing their sexuality and use of their bodies, such as through pornography and promiscuous shows. With topless acts such as Carol Doda spreading like wildfire throughout the Barbary Coast and Tenderloin in 1964, nude performances were increasing in the city (Sides, 47). Fast-forward a couple years to July of 1969. The Mitchell Brothers, quite possibly the most notorious siblings in San Francisco during this period, opened their O’Farrell Theater. 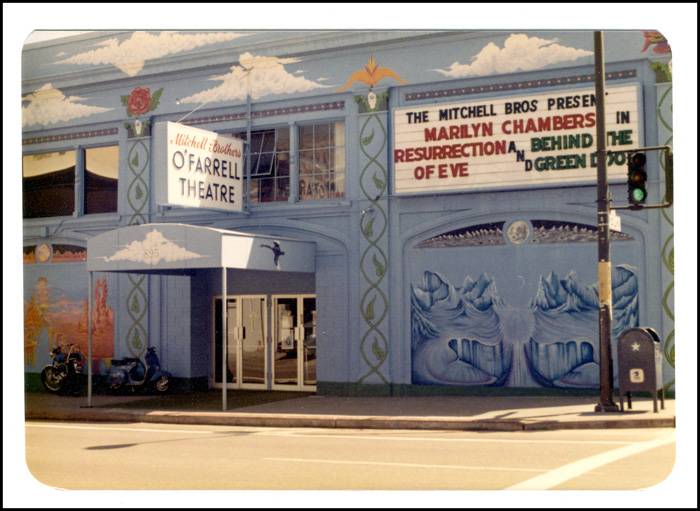 Jim and Artie Mitchell could be considered some of the forefathers of the pornographic industry due to the risks they took. For example, their theatre was the first in the nation to offer all-nude ‘lap-dances’, while at the same time remaining alcohol-free. However, what made the brothers famous worldwide was their decision to screen their own films in their theatre. Rather than hire prostitutes for their pornographic films, which was common at the time, the two decided to hire well-to-do young hippie women which they hoped would entice large audiences (Sides, 55). Their first big hit, Behind the Green Door (1972), featured Marilyn Chambers, a nineteen-year-old beauty who had recently starred in a widely popular laundry commercial shown across the nation. 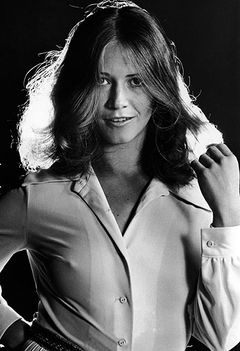 Marilyn Chambers, star of Mitchell Brothers first porn hit Behind the Green Door. With the promotion and advertising from Chamber’s commercial, the Mitchell Brothers’ film was an enormous success, netting millions of dollars while simultaneously popularizing pornography for the first time in American culture. Chambers later went on to become one of the most famous pornographic actors during this time. The brothers’ casting of Chambers, a seemingly normal girl from a wealthy family, revolutionized the industry by introducing a star who was of a similar background to many of the individuals consuming the product: well-to-do, young businessmen. By showcasing this kind of actress, the Mitchell Brothers were able to capitalize on the hidden desires of their patrons, who had only ever experienced prostitutes in these types of films. In addition, they got lucky for her role in a national commercial, as many individuals who went to see the film were already familiar with her. 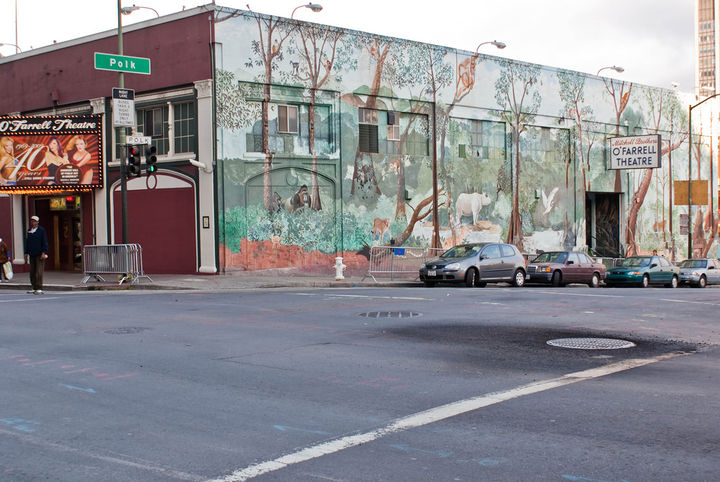 Following their huge hit, the Mitchell Brothers, along with many other entrepreneurs, began offering live shows at their theatre during the 1970s. San Francisco’s troubled Turk Street offers a great representation of the kinds of live shows available to customers during this time (Moon). Imagining this built landscape as a young gentleman seeking a cheap thrill, it appears like a kid in a candy shop. Simply put, if an individual wanted a night on the town with a young lady, he could easily pay for a fix on Turk Street. This image is just one of many that display the abundance of these types of theatres in the neighborhoods of San Francisco during the 1970s. What is most surprising about this photo of Turk Street is how women were portrayed. With signs such as this, women appear to customers as a commodity that can be bought for a low price. 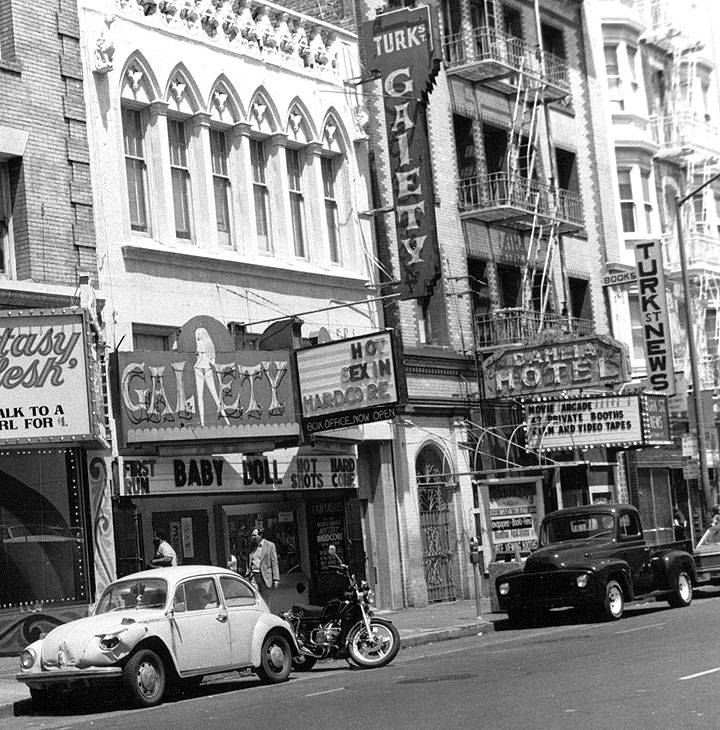 First block of Turk Street in the early 1970s.

Not everyone reacted positively to the pornographic industry in the city. Around this time, radical feminists argued that a main source of women’s oppression stemmed from sexual domination by men (Chenier). Shortly after commercial sex and pornography was popularized, numerous public protests and rallies were held throughout the country, many of them in San Francisco. These marches had support from men and women from a variety of backgrounds. Although this photograph below was taken from a rally in Pittsburgh, the content is still useful and extremely remarkable (Leinwand). 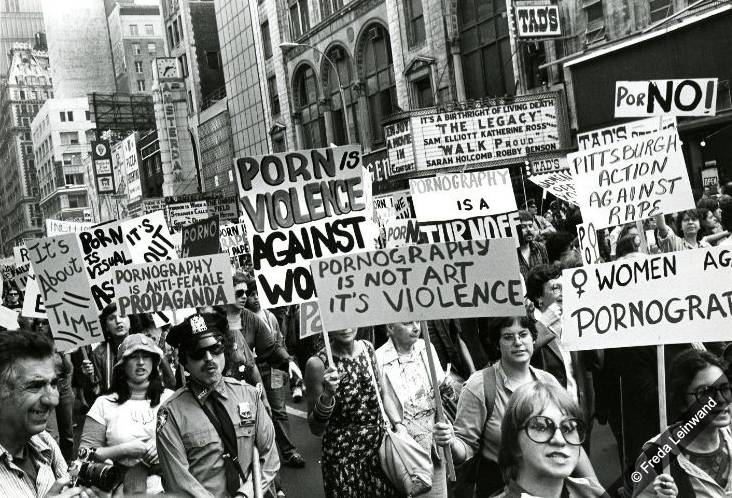 While these damaging opinions were widely prevalent during the sexual revolution, they certainly did not slow down the industry. In fact, it flourished into present day and continues to be an extremely lucrative industry for directors, producers, and actors/actresses alike. However, as the industry has grown, so have the prejudices and discrimination against actors/actresses, arguably even larger. 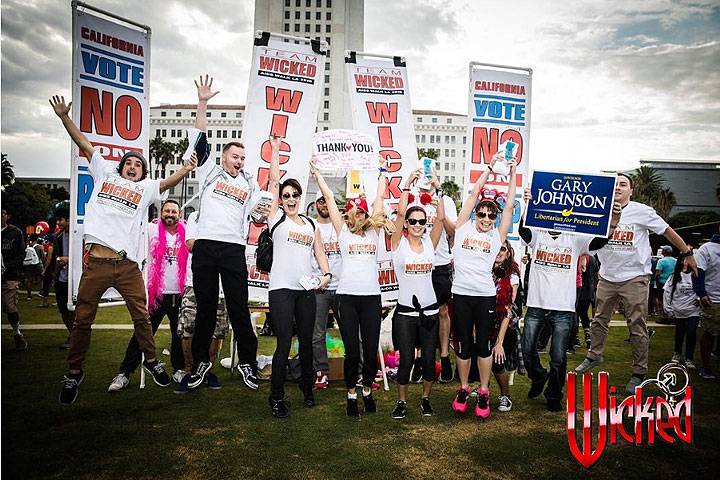 Luckily for the pornographic industry, California’s Prop 60 failed to be voted into law. Therefore, the rights of its actors and actresses were upheld, saving them from a lot of damage and harassment.

The rise of the pornographic industry in San Francisco during the sexual revolution of the 1960s through the 1980s had many profound effects on society. With its ascent, however, came anti-sex opposition, prejudice, and discrimination against actors/actresses due to the nature of their work. This resistance continues to magnify into present day, and manifests itself through harassments in social media and state-wide anti-sex campaigns.