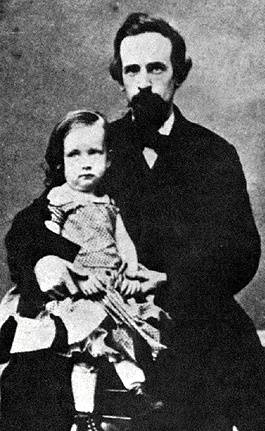 HENRY GEORGE (1839-1897) wrote in Progress and Poverty (1879), "What change may come, no mortal man can tell, but that some great change must come, thoughtful men begin to feel. The civilized world is trembling on the verge of a great movement. Either it must be a leap upward, which will open the way to advances yet undreamed of, or it must be a plunge downward, which will carry us toward barbarism." Henry George's answer to this call for a leap upward was the single tax, a theory resembling that of Victor de Mirabeau and the eighteenth-century Physiocrats.

George's career followed a pattern typical of other emigrants. He ran away to sea at thirteen, prospected for gold in California and British Columbia, and filibustered on behalf of Mexican President Benito Juarez, who was fighting Maximilian's installation on the throne by Napoleon III. George worked mainly as a newspaperman and wrote for the literary journals-- essays on the pseudoscience of phrenology and ghost stories. He even contemplated a novel. But at the same time, he became absorbed with the paradox that progress (like the coming railroad) meant wealth for a few and poverty for the many. George paid particular attention to the awesome misuse of land in California. No yeoman farmer class had usurped the privileges of the semifeudal estates that virtually enslaved Chinese coolies and were sites of sporadic squatter violence. With the huge land grants to the railroad's Big Four, around twenty million acres of arable land were concentrated in the hands of a few hundred people. Land that became available fell to speculators, who drove prices up and forced farmers to pay excessive and unfair rents.

A single tax on land, George argued, would end speculation, redistribute wealth, and provide all the revenue required for society's needs. Because "neither labor nor capital would be taxed on their just earnings," many small property owners as well as laborers found this simple solution persuasive. George's integrity, eloquence, and impassioned prose made Progress and Poverty an international best-seller, admired by Leo Tolstoy, George Bernard Shaw, and, briefly, Daniel de Leon. Sidney and Beatrice Webb thought it did more than anything to stimulate the revival of interest in socialism in England, where it influenced the formation of the British Labour Party. In that it responded to the bitterness and rebellious tradition of dissent in agrarian America, it was a significant force in the Populist and Greenback movements. Socialists and utopians considered the tax a partial and superficial remedy but saw that George clearly recognized the limitations of "equality of political rights" and demanded nothing less than "the Golden Age of which poets have sung and high-raised seers have told in metaphor."

"The Prophet of San Francisco" ran for mayor of New York, polling more votes than Teddy Roosevelt, but was defeated by the Tammany Machine. When he died, multitudes lined the streets for his funeral cortège, but already his specific proposal was an anachronism in the swift tides of developing industrial capitalism.