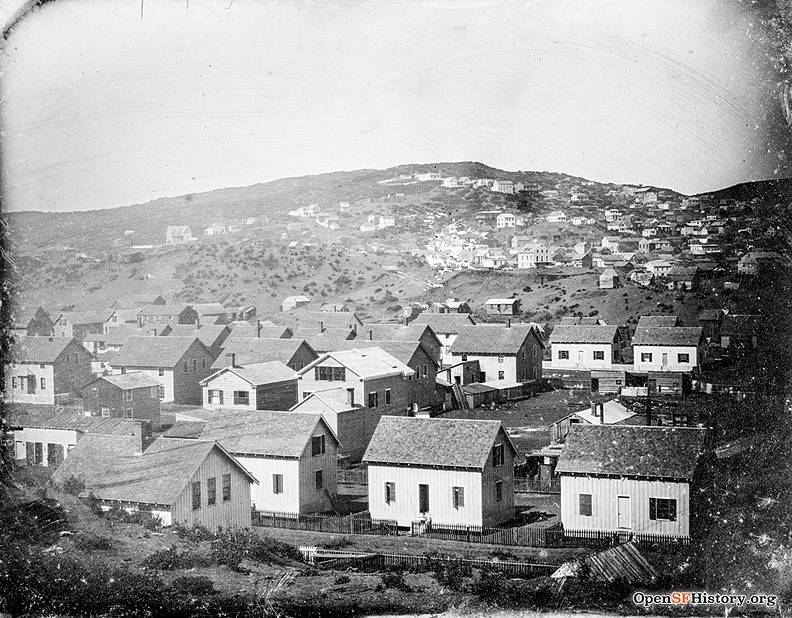 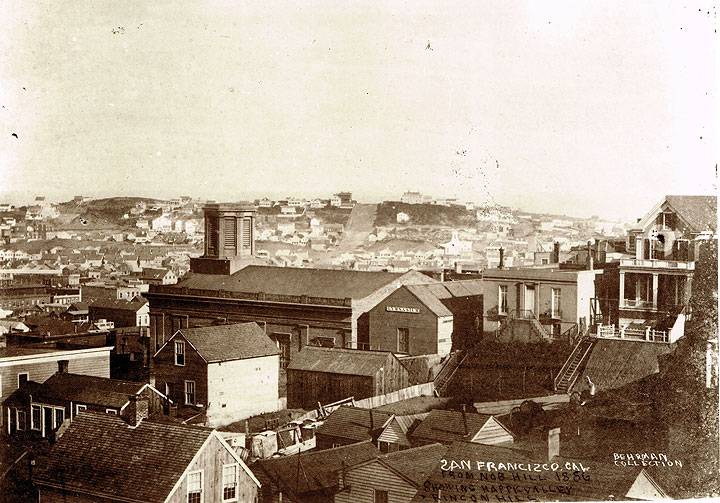 In 1849 the first known settlement of the area extended along Mission Street from First Street to Third. A tent city sheltering perhaps a thousand would-be gold miners, it was called Happy Valley for its sunshine, shelter from prevailing winds, scrub oaks, spring water, and carefree inhabitants. One residential "hotel," Isthmus House, is said to have sheltered James and Peter Donahue, founders of Union Iron Works, and the future Comstock Lode silver kings Flood, Fair, Mackay and O'Brien. Merchant and city benefactor William Davis Merry Howard and his brother George also lived in Happy Valley in 1849. By the winter of 1849-1850 the name had become ironic. Happy Valley was then a deadly place, scourged by dysentery and cholera.

At first Happy Valley was isolated. The route between infant San Francisco and the old Franciscan Mission Dolores several miles to the southwest was so sandy that even a load of hay from the mission's fields required much time and money to deliver into the town. When Col. Charles L. Wilson constructed a plank toll road in 1850 from Kearny Street to Third Street, and out Mission Street to Mission Dolores, it increased adjacent property values. One was the 100-vara lot on which the historical society's building now stands, purchased on January 16, 1847, by Alcalde-on-leave Washington A. Bartlett for the statutory fixed price of $25. This city's first public transit opened in 1852 along the plank road. The service was the Yellow Line's "omnibuses," an eighteen-passenger variant of the stagecoach.

Real buildings began to be constructed, some of them prefabricated in the East and shipped around the Horn. W.D.M. Howard erected in the South-of Market area some of the twenty-five houses he imported from Boston in 1849. The U.S. Coast Survey map researched in 1852 shows quite a few buildings along Mission Street west from First, near Second Street, and along Jessie Street from Second to Third. Yet Charles P. Kimball's 1850 San Francisco directory did not document South of Market's businesses and inhabitants. 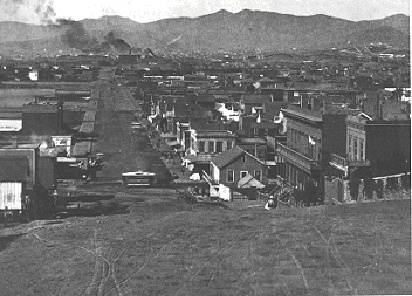 Looking westward on Harrison from top of 2nd St. on Rincon Hill, c. 1865

In the early 1850s, while the sand hills in the vicinity of Market, Mission, and Howard streets were being leveled in order to fill the tidelands, the hills south from about Folsom Street remained in place and became a fashionable suburb, well documented by Dr. Albert Shumate in Rincon Hill and South Park. Early photos show hilly areas there, with widely scattered houses of some size, but smaller houses densely crowded in the flatter blocks on either side of Mission Street. Working-class families lived in them.

East of First Street, the area being reclaimed from the bay became industrial, beginning in 1850 with James and Peter Donahue's blacksmith shop and foundry, later named the Union Iron Works. More iron foundries followed, along with machine shops, boiler works, and other heavy industries. This activity was symbolized by the 200-foot-high shot tower raised in 1864 for the manufacture of bullets and shot by the Selby Smelting and Lead Company at the corner of Howard and First streets. It continued in operation until the earthquake of 1906. 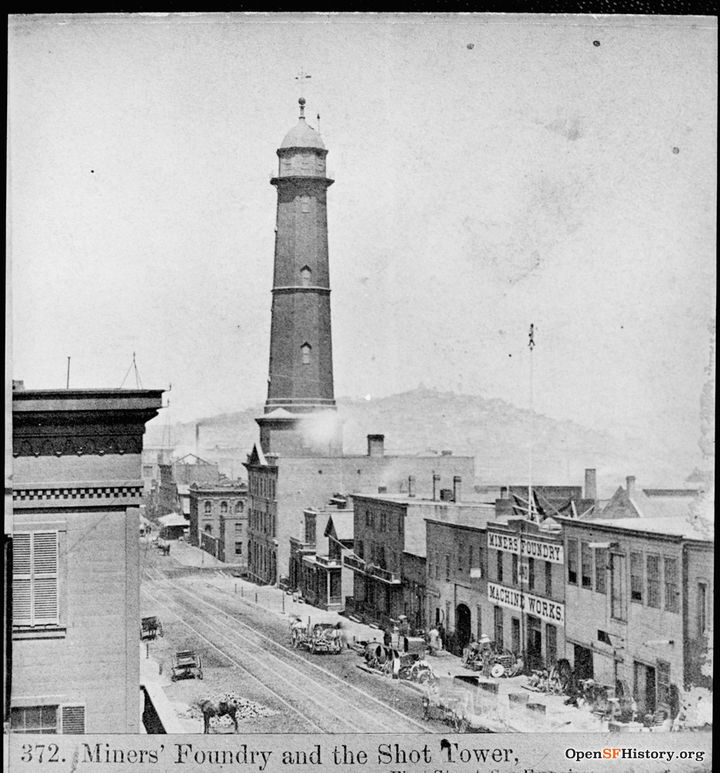 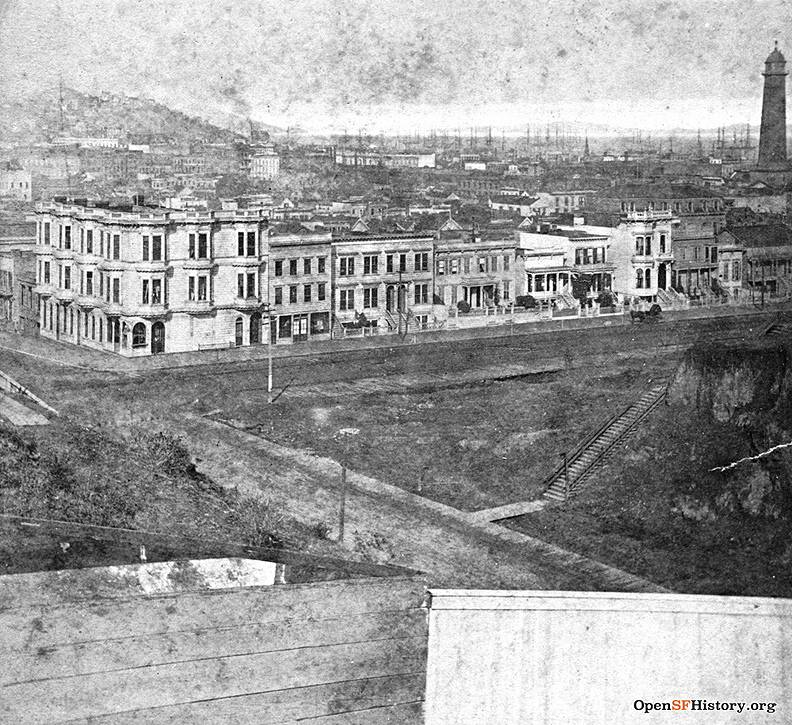 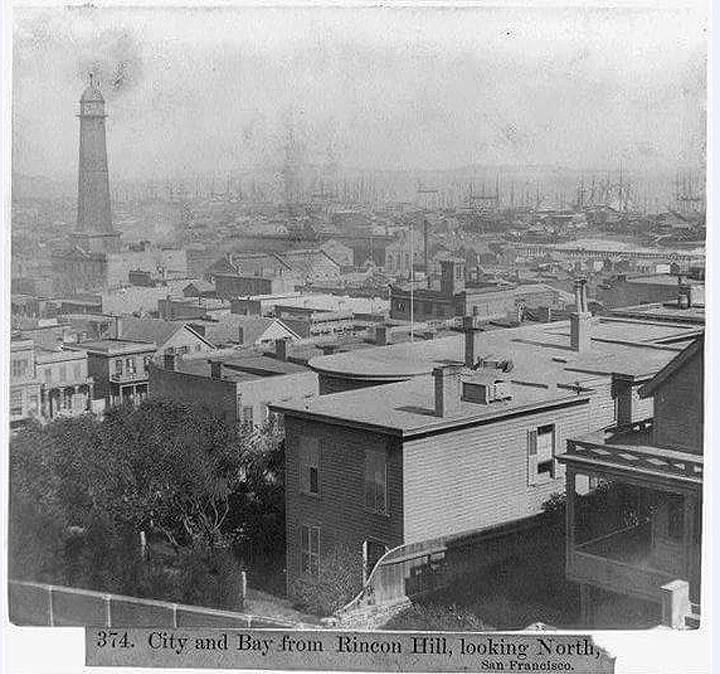 Two of the earliest institutions South of Market were orphanages, one Protestant and one Catholic. The former opened in Happy Valley in 1851, but in 1854 moved out in the country to a two-square-block site northwest of Market and Laguna streets, now the University of California Extension campus. The Roman Catholic Orphan Asylum was organized in 1851, two months after the other. In 1854 it moved into a fine brick building located on Market Street, southeast of the corner of Annie. It moved again in 1872 to a large site in the Bayview district.

The earliest church south of Market was Howard Presbyterian, which opened a white wooden chapel in 1851 on a Howard Street site donated by W.D.M. Howard. In 1867 the Presbyterians sold the building to the African-American Third Baptist Church, and moved to the south side of Mission between Third and Fourth, where they had a 115-foot frontage. At one time the largest Presbyterian congregation in the city, Howard Presbyterian moved in 1896 to a third building on Oak Street opposite the Golden Gate Park Panhandle. 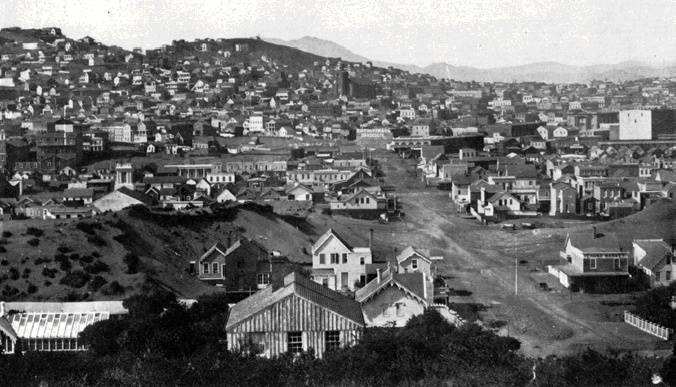 Looking north in 1856 from Rincon Hill at 2nd and Harrison. Old St. Mary's Church at California and Grant is directly in line with 2nd Street.

The second church in Happy Valley, founded in 1851, was St. Patrick's, the third Catholic church in town after Mission Dolores and St. Francis of Assisi. Its 1854 building was a small wooden one on the southeast corner of Market and Annie, next to the Catholic Orphan Asylum. The simple Greek Revival structure was moved for other uses in 1873 and 1891 and it still stands on Eddy Street. In 1872 St. Patrick' dedicated the new brick church building opposite Howard Presbyterian on Mission Street. This building also survives, serving the people of its neighborhood as it has for more than 140 years.