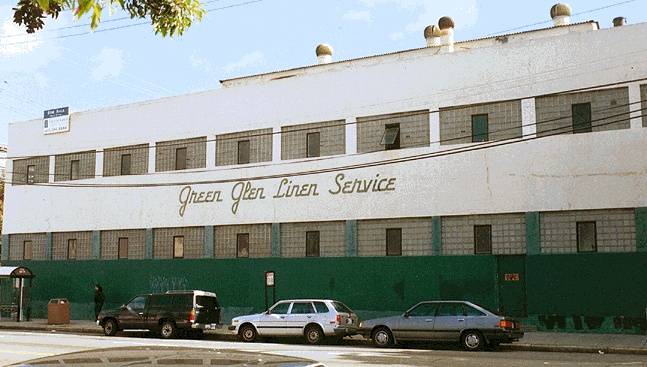 Seven hours after toasting the New Year, many of the Latino, unionized work force at Green Glen Linen Service awoke to the unexpected—their last day of work at the 18th and Folsom Street plant. A merger had been finalized between the 42 year-old family-owned and managed company and the industrial laundry giant, American Linen. Preparations for the sale of its property were rushed—so much so that sulfuric acid was accidentally spilled down a central drain, requiring the assistance of the San Francisco Hazardous Materials division to contain it.

It is no coincidence that developers have already filed permit applications to construct nearly two hundred units of live/work luxury lofts within two blocks of the Green Glen property. These live/work units, often referred to as "lifestyle loft residential condos," sell for a price as pretentious as the name. For this reason, Green Glen's quick closing disturbed more than its workers left to collect unemployment and the long time tenants facing a lease expiration. It has also aroused and started to rally concerned neighboring residents and other workers in the surrounding area of the Northeast Mission Industrial Zone or NEMIZ, who very likely will have to deal with similar fates. 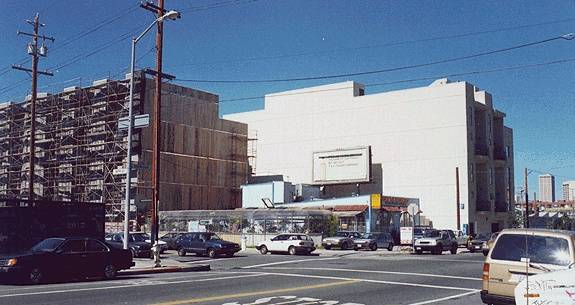 The 1988 Live/Work Zoning Ordinance was originally designed to regulate conversions of existing buildings, but permit applications for sixty units of new live/work construction have been filed for the old Bode Gravel property, now an empty lot on Harrison, between 16th and 17th Streets. It is still unclear if any "live/work" loft units have been planned for the three-building Green Glen complex, but according to tenant John Sheridan, artist/owner of the nationally acclaimed Grew-Sheridan Studio, the second floor or upper level of the largest structure will be opened to office space with "multi-media capabilities." It is common practice among computer owners to claim a live/work situation for purely residential motives.

Joseph Imbelloni, of the Imbelloni Construction Company, located only a few blocks away on 19th Street by South Van Ness Avenue, was one applicant attempting to bend the zoning ordinance for another thirty live/work "lifestyle" units there and a block and a half up Harrison Street, at the dead end of Mariposa.

Local live/work resident, Deborah Walker of Developing Environments said, "It's developers like Imbelloni who make it difficult for the dedicated artist. They take advantage of a 'loophole' in the ordinance that ends up putting further restrictions on live/work zones."

'Lichen,' a fellow artist and associate of Walker's, believes that "this will obviously continue to inflate the surrounding residential rentals and property values, and could radically change the artistic and ethnic character of the Mission, as well as threaten even more jobs."

Bruce Wilson is the realtor for Green Glen properties, approximately 35,000 square feet of usable space with a price tag of $2.3 million. He has speculatively tagged the area around the former plant as "No-Name Gulch."

The Morning After Surprise

The merger of the two linen services "marks the 'end of an era' for mid-sized, family owned industrial businesses" in the City, commented Green Glen's last receptionist/secretary, now answering calls from an office at the American Linen facility on Indiana Street. That foreboding day of closure at Green Glen also made American Linen, a corporation that owns and operates 140 plants throughout Europe, South America and the western United States, the City's last unionized linen service plant.

The fateful morning after happened to be a Friday, and the last official payday at Green Glen Linen for over half of its 42 member staff. Three quarters of the workers were women and most of them middle-aged, in their fifties and sixties. Lucia Menjivar, now sixty-three, had been employed there since 1959, for nearly forty years. "For everybody it was a surprise," she said. "There was not too much work over the last few years, except around Christmas. I think the company [had to] go down, but everyone worked until the end, even though business was slow."

According to Green Glen's former plant manager Ed Bernhard, son of the owner and now a temporary consultant with American Linen, twenty of his former full-time union staff transferred along with him to the Indiana Street plant, including all five of his route drivers, who are men. "We've managed to integrate into the much larger operation of about 160 laborers without much trouble; same methods, just bigger," said Bernhard. Concerning his other twenty-two ex-employees, he commented: "This might be a good time for them to retire a little early."

Two women did retire and one of them was Mrs. Menjivar. She was forced to settle for the reduced union benefits that, unfortunately, came with her choice of an early retirement. According to Susie Tom, of Textile Processors Local 75, half of Green Glen's remaining twenty union members were advised to collect unemployment, unless they were willing to relocate or make daily commutes to either Santa Rosa or Sacramento, where American's union plants are accepting transferals. Most of those facing that choice were older women line workers.

The transition from the closure of Green Glen operations into preparations for sale went at a hurried pace. The degree of haste was particularly evident on February 13, recalled Sheridan, adding that it was also a Friday, of course. "The police, fire department and an environmental unit came to secure a sulfuric acid spill down a central drain. The drain was between Grew-Sheridan Studio and Green Glen's inner buildings. An employee of an out of town chemical supplier [Prinova Co. Inc., & #150; Auto Liquid Systems Chemical] accidentally dumped for about five minutes. The authorities were here within fifteen minutes, but not in time to save the sump," he said.

Grew-Sheridan Studio had a lot to lose if the accident would have got out of hand, including a reputation for safety developed over eighteen years at the studio's 500 Treat Street location. Sheridan and his wife Carolyn, who passed away just over a year ago, have worked, taught and exhibited in the highly competitive fine arts and crafts field throughout the last two decades. They have conducted cabinet making classes with artistic flare and inspiration since 1979 at the present location.

Sheridan said when his lease runs out in June, his building is slated to become a micro-brewery, something that other local residents and workers consider redundant, given that another is also planned for the corner of 18th and Bryant Streets.

Arthouse, a program of California Lawyers for the Arts, and a new organization called Save Our Shops/Save Our Studios (SOS), have been working toward upholding the intent of the 1988 Artist Live/Work ordinance: to encourage owners of industrial loft buildings to legally convert space to 'live/work' use by artists. On its tenth anniversary, the ordinance that took thirteen years to get on the books is now clearly endangered. According to SOS, either by oversight or more likely, by smartly composed wording when it was drawn up, the law contained a loophole for residential developers who could easily build market-rate, luxury, loft-style residences in the commercial and industrial zones. Tim Graffigna, a commercial realtor with Raike Damon & Co., says "it's a nice loophole for developers" to "residentialize" their investments.

According to Arthouse, the 194 live/work luxury "lifestyle" lofts planned within the two block radius of former Green Glen properties also happen to be centered around the points of entry and departure suggested for a Greenbelt Bike Route to the Giants' Stadium, first proposed in 1996. Besides the sites for the luxury live/work permits made by Imbelloni, the balance are on the even side of the 2100 block of Folsom Street, and in the middle of the odd side of Shotwell's 300 block. What the developers and realtors are calling "No-Name Gulch."