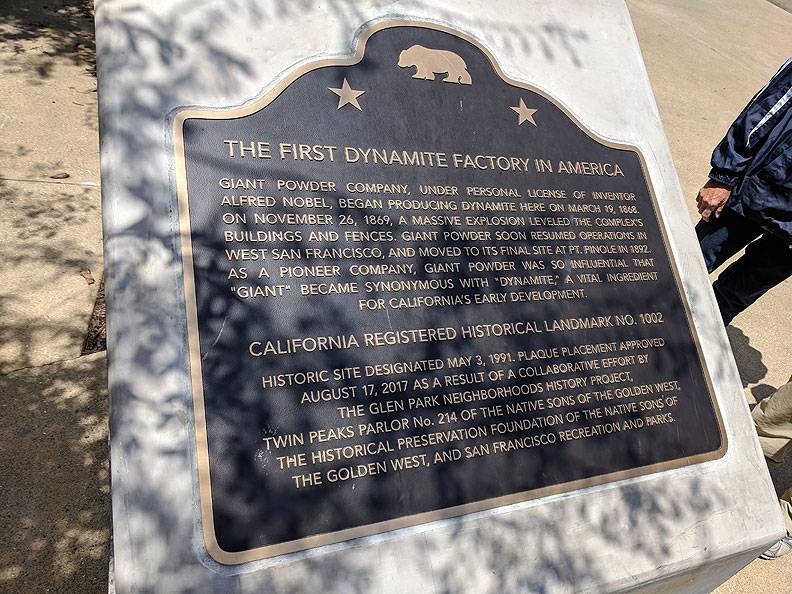 Plaque placed in Glen Canyon to commemorate the first dynamite factory in the U.S.

Recently, former Vice President Al Gore spoke at the offices of the Alliance for Climate Protection in Palo Alto to acknowledge his receipt of the Nobel Peace Prize. Yet it might have been just as appropriate if he had held his news conference in Glen Canyon. Nearly 140 years ago, Glen Canyon played a foundational role in the accumulation of wealth that in the 20th century would become the worldʼs most important prize of peace, science and literature. Alfred Nobel, father of the high-explosive industry and philanthropic provider of the Nobel Foundation, personally licensed the first dynamite factory in the United States—the Giant Powder Company—right here in our beautiful canyon. 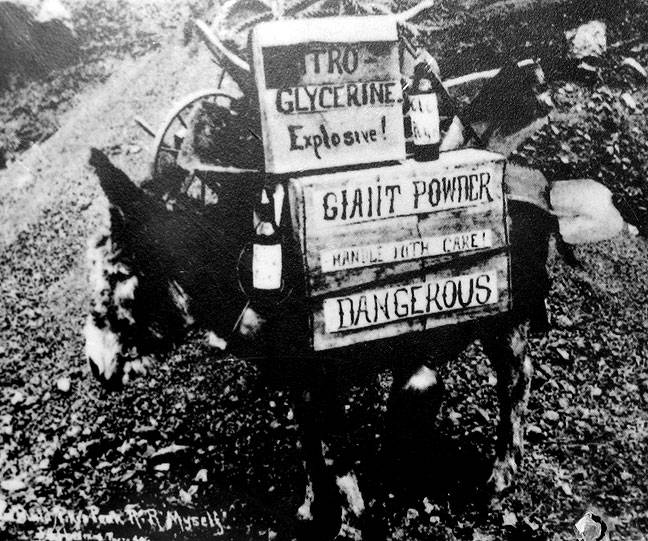 Donkey bearing a load for the Giant Powder Company, seen here at Point Pinole where the Giant Powder Company moved in the mid-1890s. A fatal explosion in 1869 in Glen Canyon led to its first move to the sand dunes in the "outside lands," then another explosion forced them to move to the Berkeley waterfront, and finally to the obscure northern reaches of the Bay at Point Pinole.

In an amazing paradox, nitroglycerin is not only the explosive chemical in dynamite but is also used as a drug in the treatment of chest pain or discomfort known as angina pectoris. Nitroglycerin was first discovered by Ascanio Sobrero of Turin, Italy in 1846. Noting its unpredictable volatility and power and its propensity to cause violent, debilitating headaches, Sobrero shelved nitroglycerin as being too dangerous and unsuitable for commercial manufacture. Ironically, the medicinal value of nitroglycerin was being realized in parallel. By the end of the 1870s, the ability of nitroglycerin to relieve the attacks of chest pain associated with angina pectoris had been documented in the medical literature, making it one of the oldest drugs in our modern medicine cabinet.

In the eyes of Victorians during the Industrial Revolution, Nature was to be conquered if one was to snatch her wealth of valuable ores and transport her treasures via more expeditious overland routes—through mountains rather than over or around them. Black powder, first developed in China as early as the tenth century, had been the mainstay of blasting and artillery. But with the explosion of progress in the new Industrial Age, black powder was quickly losing its efficiency and advantage. The conquest of Nature needed a more powerful tool.

The young Alfred Nobel of Stockholm, Sweden took up research into the explosive properties of nitroglycerin in 1859. After resolving problems in the manufacturing process, Nobel directed his attention to the most sure and complete detonation of nitroglycerin, at least five times as powerful as black powder. Nitroglycerin burned when exposed to flame but the heat was never hot enough to cause an explosion. Nobel discovered that his “blasting oil” was most powerful when exposed to a flame under pressure (for instance, poured into a bore hole) and if ignited with an initiating agent. His 1867 patent for a blasting cap containing mercury fulminate as the initiator marked the beginning of the high-explosive industry.

Nobel experienced immediate commercial and financial success with his invention. Yet, he was soon reviled as the demon of death. Hundreds of people around the world perished while unknowingly traveling or coming in close contact with shipments of the volatile liquid that seemed to spontaneously explode with the slightest impact. Nitroglycerin was quickly banned from all types of conveyance. While researching how to better stabilize the liquid for transport, Nobel accidentally discovered that a German clay called kieselguhr (a soft, chalk-like rock) could absorb three times its weight of blasting oil, creating a putty-like substance that could be packed into cartridges and topped off with a blasting cap. Nobel called his safety innovation “dynamite.”

While he never visited California, Alfred Nobel was attracted by the stateʼs entrepreneurial spirit and newfound wealth. Nobel licensed his new invention to Julius Bandmann of San Francisco, the brother of a close European business associate. Following a demonstration of dynamite in the blasting of a tunnel for the old Bay View railroad (likely the first use of dynamite in the United States), Bandmann incorporated the Giant Powder Company in August 1867.

Giant Powder Company leased property in the unpopulated “outlands” of Glen Canyon (then known variously as Rock House, Rock Canyon, Rock Ranch or Rock Gulch) from Rancho San Miguel resident L.L. Robinson, who also served as Giantʼs first president. While dynamite was relatively stable, nitroglycerin was not, and storage was mandated to be as far away from populated areas as possible. The factory began manufacturing dynamite in March 1868, a full two months before the official patent for dynamite was granted to Nobel.

During the first year of production by mills in Rock Canyon and Europe, the total production of dynamite increased from 11 tons to 78 tons. Production at the Giant mill in Rock Canyon continued without a hitch for 15 months. Then, on Friday, Nov. 26, 1869, at about 6:45 p.m., an explosion rocked the one-acre complex, killing the chemist and his teamster driver and injuring nine others. The exact cause of the disaster was never determined.

Because the population of San Francisco was advancing closer to Rock Canyon, Giant purchased 100 acres in the sand dunes south of Golden Gate Park, an area now bounded by Kirkham and Ortega streets, and 20th and 32nd avenues. Manufacture began there in February 1870 and continued until another explosion destroyed that complex in January 1879, killing four. The factory then moved to Fleming Point on the Berkeley bayside (now the site of Golden Gate Fields) and began operation in the fall of 1879. Tragically, three more deadly explosions would occur on this site by 1892, killing a total of 66 workers. The plant moved to its final location on San Pablo Bay at Point Pinole, now occupied by East Bay Regional Parks. The Giant Powder Company was acquired by the Atlas Powder Company in 1915. 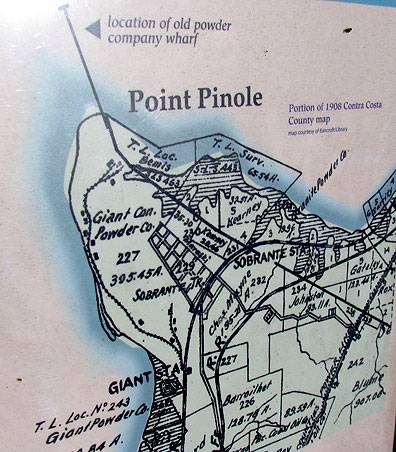 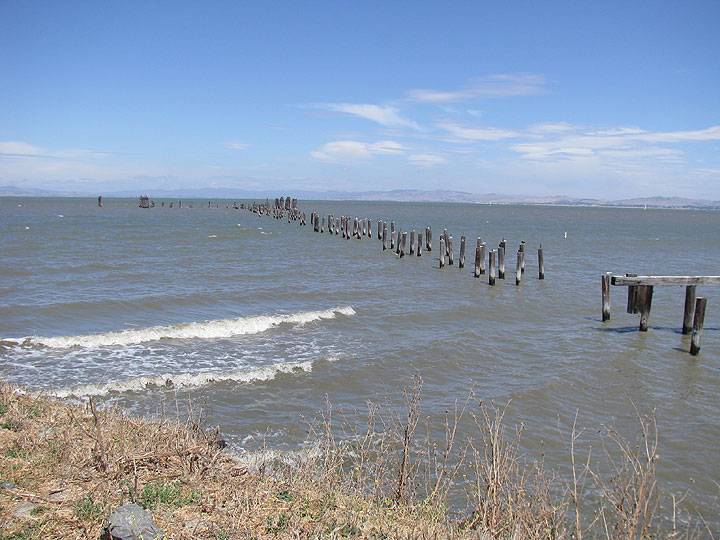 Dynamite fundamentally changed the way engineering projects were planned and executed, quickly becoming the most popular explosive in the world. It was more powerful, more efficient and less costly than traditional methods. Dynamite had become essential for civil projects that tamed mountains for roadways and railways, captured water for major metropolitan areas, removed trees and boulders for agriculture, and bored deeper into the earth for mining. It was used to help clear rubble after the 1906 earthquake and conflagration in San Francisco, and is still used to fight oil rig fires. Nobel had changed the world and, in so doing, had become an enormously wealthy man. Ironically, he developed angina pectoris late in life and was prescribed the medicinal form of nitroglycerin for internal use. He refused, remembering all too well the debilitating headaches of his younger years while working with the more potent explosive. He died December 10, 1896, following a severe stroke.

Nobel was a pacifist throughout his life. He despised the fact that the world identified him as an immoral man who profited from the development of violent tools capable of death and injury. Near the end of his life, having no descendants, he decided to leave his wealth in the form of a fund that would award prizes to those “… who, during the preceding year, shall have conferred the greatest benefit on mankind …” in chemistry, physics, medicine and literature. He also specified an award to “… the person who shall have done the most or the best work to promote fraternity between nations, for the abolition or reduction of standing armies and for the holding and promotion of peace congresses …,” the award for which Gore was honored.

The Office of Historic Preservation of the California Department of Parks and Recreation designated the first location of the Giant Powder Company in Glen Canyon as California Historical Landmark Number 1002 in May 1991. The description can be viewed at the San Francisco historical landmarks page of the California Environmental Resources Evaluation website. Newspaper accounts of the November 1869 explosion note the location to be “… near the base of a large hill …” and “… near the old county road to San Jose …” (now Interstate 280) and “… nearly half way between St. Maryʼs College and the Industrial School,” (now St. Maryʼs Park off Mission Street and City College, respectively). In History of the Explosives Industry in America, first published in 1927, the location of the factory is narrowed to the location of the current Glen Park recreation center and playground, “… in the Park Terrace section west of Burnside Avenue between Chenery Street and Bosworth Street …,” a description that would place it in the baseball field. A grainy photograph that accompanies this proposed location makes it impossible to decipher its true location. However, the authors purport the location is substantiated by a May 1927 letter from F.W. Wallace of San Francisco, who had made several trips to the factory in his youth. 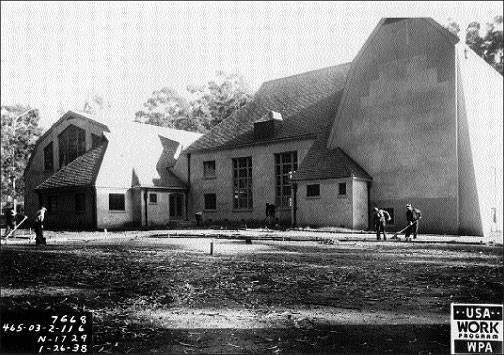 A recent episode of Eye on the Bay (CBS5) noted the plaque for the landmark could not be located. While permission was granted by the San Francisco Landmarks Preservation Advisory Board to allow the nomination of City property as a landmark in January 1991, a concerted effort was never undertaken to place a plaque at the physical location. According to the State Office of Historic Preservation (as of May 2006), an official plaque could be placed at the site for $2,875 plus tax and a $100 freight charge. It is not clear what is included besides the plaque, including installation, and whether it includes signage directing passersby to the area. It also not does include the cost of plaque maintenance.

Our cultural values have changed dramatically in the past 140 years and we generally now want to protect rather than tame nature. It is clear how the inventions of Alfred Nobel and the accumulation of wealth that ensued established the most prestigious award in the world—the Nobel Prize. However, given the nature of the history of dynamite, some residents may consider the local association our own “inconvenient truth.” Community discussion is warranted and, in the end, the residents of Glen Park should be responsible for the decision of whether placement of a plaque is appropriate.

--The original article was published in the Winter 2007/2008 edition of the Glen Park News. It is printed here with permission.