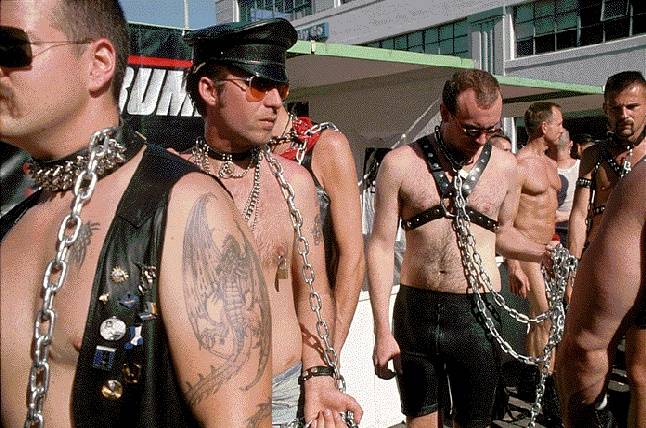 For many, admitting their interest in leathersex was really a second coming-out process which could be nearly as difficult as the first. Yet probably no other place provided the "street laboratory" environment for the curious to explore their interests as did the Folsom district.

JOSEPH BEAN: I think there was a feeling of, "Well, we're free enough, and we're here, and we are a large enough number to be doing this in front of other people," you know? As opposed to earlier times, when [I attended] the [S/M] parties in Los Angeles [in the '60s], the circle was so secretive, and we couldn't even tell our best friends about the parties, unless we'd already cleared that conversation with the hosts of the party. And here we were, ten years later, or slightly more, able to just go to a public place, plop down our five bucks, and do it. And do it in front of people we didn't even know.

Somehow that seemed like a big step. Although now, looking back, it seems like no big deal. But that was 18 to 22 years ago, and at that time, it did still seem important. And maybe there even was a little bit of the evangelist in it, you know? If we do this, and do it really right, you know, these fringe dwellers who are afraid of us or afraid of the scene will see it and get over it. I don't think that there was much of a "gathering new meat" mentality. It really was more about getting them over it.

So it was kind of cool to leave the bar and still go to the sex clubs where, in effect, the villagers wouldn't be frightened to see our lives. Even our sex lives. But to see something of who we really were. They were all people who knew what they would be exposed to by being there.

And there was, no doubt, also another component to this whole attitude, which was, by doing a thing like that, you felt, at least in some small way, like, sort of the sexual elite. The people who were really doing what others fantasized about, or draw pictures of for their ads, or whatever. We were the real McCoy. And there was a sense of pride in that, but I don't think it was overblown or arrogant.

BILL: You were just seeking a sort of authenticity with kindred spirits.

JOSEPH: Yeah. And glad for others, outsiders, to see it. Partly because it might help. They might get over some stuff themselves. But also because it just felt good to be able to relax that much.

BILL: So these outsiders would be guys who were maybe curious about radical sex but hadn't really dipped their feet very deeply in the waters?

JOSEPH: Yeah, mostly. We're really talking about what now is called the "Golden Age" of Folsom. But we're sort of talking about the beginning of that Golden Age. And we knew something entirely new was happening, and it was very exciting."

Recreational sex, or sport-fucking, was in many ways egalitarian. It crossed economic and class lines. While the furtiveness of previous generations still lingered, there were tremendous opportunities to have joyous, celebratory sex with strangers. Jack Fertig explains. "We had mass transit, and mass communication, and, you know, you could get newspapers telling you where the action was. And word of mouth. You had people from all different classes. You could have a hundred guys a night, one way or another. They were incredible times."

While most of this exploding sexuality took place in private locations, it was the public aspect which many gays found offensive, as in this editorial from the 3/29/72 issue of Advocate, "Bush Queens a Liability?"

"[W]e must pause and give serious thought to the matter of public sex. Is it really a right, as some contend? Or is it really an infringement on the rights of others, as opponents suggest? Or is it just "damned stupid," as most Gays might put it?"

Still, many gay men pushed the hedonistic aspect of the '70s revolution to the limit, even in public displays that went beyond affection:

JACK: I remember being on my knees in Fe-Be's, and the cab driver walking in and watching; his eyes popped out, seeing me on my knees, sucking dick right there in the middle of the bar, and nobody else minded, and okay, I was shit-faced drunk, but. I mean, hell, I sucked dick right out on Folsom Street, under a street lamp. You know, people did things in those days.

One time on Castro Street, right in front of the Castro Caf, by what's now Without Reservations, some guy was walking down the street, with the back of his pants ripped open, and his butt hanging out, and some drag queen walks up right behind him, and stops him, gets down on her knees, and starts eating out his butt right in the middle of the street.

JACK: And, this is, like, a Wednesday night. "Oh, just another night on Castro Street; isn't it fabulous." It was like every queer boy's fantasy-land come true. It was too wonderful. And yes, like the super-ego had gone on a sabbatical. It was incredible. So we were just having this great time. It was adolescent abandon."