This article was originally published in The Semaphore #200 in 2012.

Gary Kray has pruned his last rose. The longtime gardener of the Grace Marchant Garden on the Filbert Steps and along Napier Lane died September 7, 2012 of heart disease at age 70 in his home on Napier Lane. For 33 years he nurtured this special place, following in Grace’s footsteps uncannily for the same length of time that Grace worked here, cultivating, shaping, painting with plants. 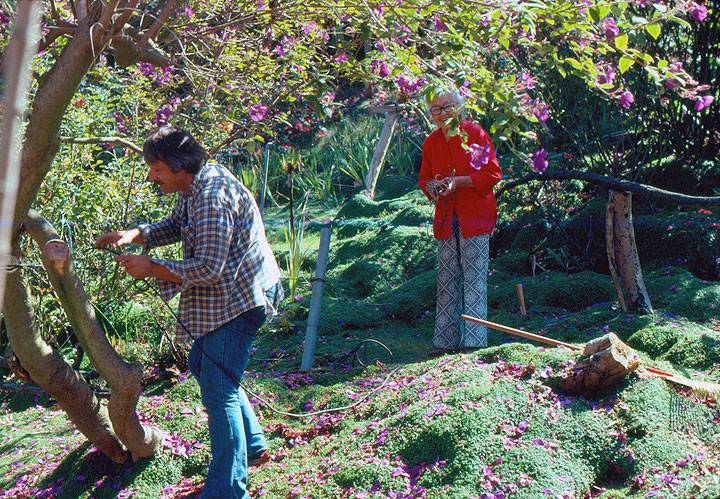 Gary Kray and Grace Marchant share a moment in the garden.

Gary began working with Grace in 1979 when she was nearing the end of her life, helping her when she could no longer do the pruning or keep up with the constant weeding. He learned how to garden from her, and then he devoted his life to maintaining the urban oasis she created and putting his own personal stamp on it, giving it a Mediterranean touch by adding two palm trees, several Italian cypresses, tree ferns and dozens of rose varieties. He always viewed the garden as a visual expression, planning its design through use of textures and colors to complement the steep terrain. For years he could be seen there daily, watering, weeding, pruning, planting, and tending this magical place for the benefit of all San Franciscans.

Gary’s life on Napier Lane was no coincidence. He first met Grace Marchant when he was a boy sometime in the 1950s. He loved to explore the city on his own and would travel by streetcar and on foot all over town. He found his way to the Filbert Steps one day and met the woman tending the garden. Their conversation is lost to time, but in 1975, with assistance from Grace, who helped manage property for landlords in the neighborhood, he moved into the 1855 cottage at 10 Napier Lane. From then on they were next-door neighbors and friends until she died at age 96 in 1982. Before she died, she asked him to carry on her legacy in the garden, a request he honored for the rest of his life.

Gary started a decade-long Halloween tradition by placing jack-o-lanterns in the garden, an event that quietly grew so big with more than 300 glowing faces in the dark and hundreds of people crowding the wooden stairway that it had to be abandoned. For years after people would wander up the steps on Halloween and ask where the pumpkins were. 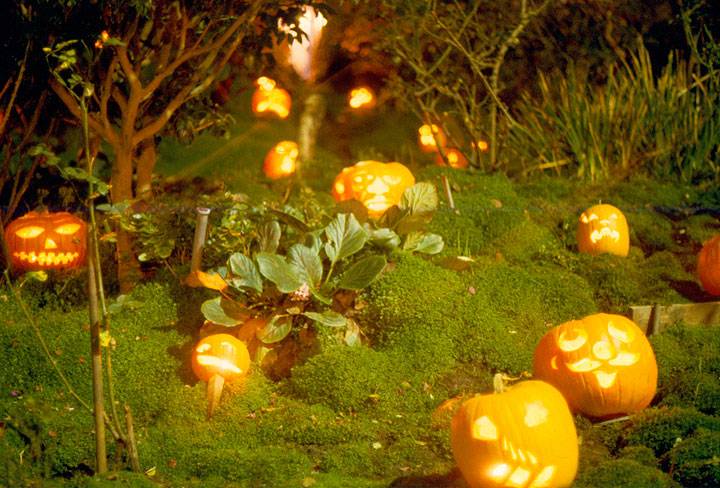 Pumpkins inhabit the Gardens during Halloween.

Over the years he received many awards for his work in the garden, including a Certificate of Honor of Distinction and Merit from the San Francisco Board of Supervisors and the first Alfred E. Stettler Award. Grace spent 33 years working in her garden, and by the time Gary died he had equaled her 33 years. Like Grace, Gary never received financial compensation for his work tending this magical place.

Gary was more than a gardener. Among his many accomplishments, he was fiercely proud to be a native San Franciscan. He grew up in the Haight-Ashbury and the Sunset, attended St. Cecilia School and Riordan High School, received a B.A. in European History from USF, served in the U.S. Army in Vietnam during the war, and spent as much time as possible in Europe. A Francophile from a young age, he went to Paris to study at the Sorbonne when he was 18 and returned many times throughout his life. His three great loves were San Francisco, the British Monarchy, and Paris.

He was a devoted preservationist who fought many battles in San Francisco, most notably the failed effort to save the City of Paris on Union Square, and the successful effort to help save San Francisco’s Victorian architectural heritage. In 1972 he co-founded San Francisco Victoriana, a designer and manufacturer of full Victorian facades, wood moldings and other Victorian ornamentation. In the 1970s, the company restored hundreds of Victorian houses in San Francisco and elsewhere. Gary lectured at UC Extension and before real estate groups and others to raise awareness of the value of Victorians, helping reverse a pattern of demolition and defacement of these architectural gems and spurring a trend of restoration and preservation.

Gary’s preservation passion continued throughout his years on Telegraph Hill. He was instrumental in establishing the Telegraph Hill Historic District, helping drive some of the early planning and political efforts, and he helped fight a highly-publicized battle to protect the Grace Marchant Garden from real estate development, co-founding Friends of the Garden (FOG) in 1985, which joined with the Trust for Public Land to successfully preserve the garden in perpetuity through conservation easements. 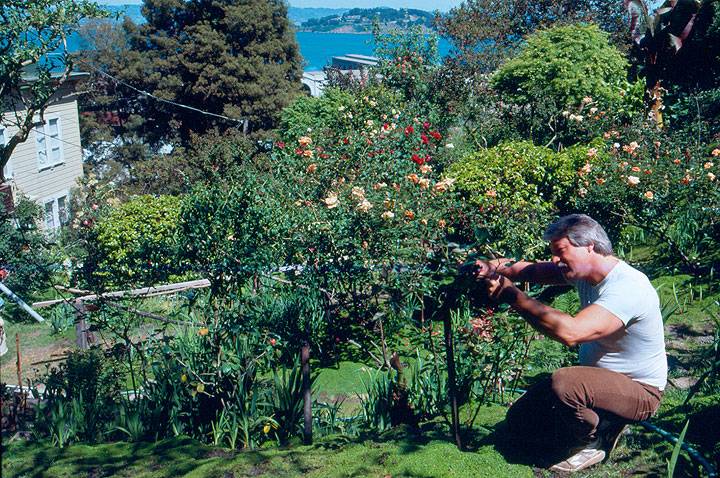 Gary Kray hard at work in the garden.

To make time to devote his life to the garden, he began night taxi driving for Luxor Cabs in 1980, a job he loved because he could spend his time educating his fares about San Francisco old and new. By day he was a gardener, by night a taxi driver, and both day and night, a true San Franciscan.

Before he died, Gary passed the torch as official gardeners to my wife Paula McCabe and me. We’ve been helping him tend the garden for the last decade, and as directors of Friends of the Garden have been overseeing the work for longer than that. We will carry on Gary’s (and Grace’s) legacy, continuing the long tradition of voluntary service that they established.