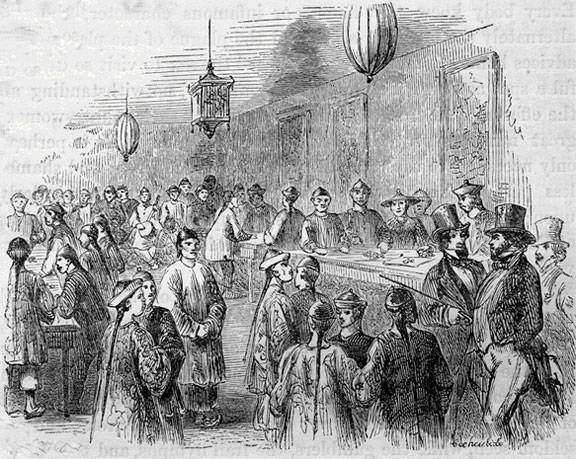 "But poor or rich, the speculative spirit continued and either in direct gambling or in nearly similar operations in mercantile, land-jobbing, or general business, the inhabitants of San Francisco, at this period of its history, seemed to be one great horde of gamesters." San Francisco Annals, 1850-55.

This quote from the text of the San Francisco Annals captures well the spirit of the age at the time of the Gold Rush. In their mad quest for profit-making, people engaged in all sorts of speculative activities. Mining for gold and the trading of goods were the two main ones.

Gambling was a peculiar feature of San Francisco at this time. It was the amusement--the grand occupation of many classes--apparently the life and soul of the place. There were hundreds of gambling saloons in the town. The bar-room of every hotel and public house presented its tables to attract the idle, the eager and covetous. Mont, faro, roulette, rondo, rouge et noir and vingt-un, were the games chiefly played. In the larger saloons, beautiful and well-dressed women dealt out the cards or turned the roulette wheel, while lascivious pictures hung on the walls. A band of music and numberless blazing lamps gave animation and a feeling of joyous rapture to the scene. No wonder the unwary visitor was tempted and fell, before he had time to awake from the pleasing delusion. To make a fortune in the turning of a card was delightful--the very mingled hope and fear of eventual success was a charming excitement. For the moment, men felt as great conquerors may be supposed sometimes to feel; they maneuvered on the green cloth--the field of their operations--thinking their own skill was playing the game, when chance alone gave the result. At the end of a long evening's campaign of mingled victories and defeats--petty skirmishes--they would either draw off their forces to renew the game next day, or hazard their all, thousands of dollars perhaps, on the issue of one great battle, and a moment afterwards leave the table richer or poorer by a moderate fortune. Again and again, were such campaigns fought, till the excitement and intense desire of playing became chronic. When great sums could no longer be had, small ones served the same purpose; and were, in the end, lost like the others. Gambling became a regular business; and those who followed it professionally were really among the richest, most talented and influential citizens of the town.

The sums staked were occasionally enormous. One evening sixteen thousand dollars' worth of gold dust was laid upon a faro table as a bet. This was lost by the keeper of the table, who counted out the money to the winner without a murmur, and continued his business with a cheerful countenance, and apparently with as good spirits as though he had incurred no more than an ordinary loss. As high as twenty thousand dollars, it is said, have been risked upon the turn of a card. Five thousand, three thousand, and one thousand dollars were repeatedly ventured. The ordinary stakes, however, were by no means so high as these sums - from fifty cents to five dollars being the usual amount; and thus the common day laborer could lay his moderate stake as stylishly as a lord. It was only when the rich gamester was getting desperate, or a half tipsy miner had just come from the diggings with a handsome "pile" that the larger sums were put on the cloth. Generally speaking the keepers of the tables, or "bankers," had no objection to these heavy stakes; they knew the game better than the player, and were well aware of all the chances in their own favor. But it was scarcely necessary for the professional gambler to encourage particularly large stakes. The combined amount of all the usual small ones was very large while every two minutes there was a new game formed, and new stakes put down. The extensive saloons, in each of which ten or a dozen such tables might be placed, were continually crowded, and around the tables themselves the players often stood in lines three or four deep, every one vying with his neighbors for the privilege of reaching the board, and staking his money as fast as the wheel and ball could be rolled or the card turned. The professional gamblers, who paid great rents for the right of placing their tables in these saloons, made large fortunes by the business. Their tables were filled with heaps of gold and silver coin, with bags of gold dust and lumps of the pure metal, to tempt the gazer. The sight of such treasures, the occasional success of players, the music, the bustle, heat, drink, greed and deviltry, all combined to encourage play to an extent limited only by the great wealth of the community. Judges and clergymen, physicians and advocates, merchants and clerks, contractors, shopkeepers, tradesmen, mechanics and laborers, miners and farmers, all adventurers in their kind--everyone elbowed his way to the gaming table, and unblushingly, threw down his golden or silver state. The whole of the eastern side of Portsmouth Square, three-fourths of the northern, and a portion of the southern sides were occupied by buildings specially devoted to gambling. At these portions of the plaza were perhaps the greater saloons, but all around the neighborhood there were numberless other places, where the same system was carried on, and where the proceedings were exposed to the careless look of every passer-by.

While such scenes, in hundreds of distinct places, were night and day being acted in public, the better or richer classes, who at first had openly appeared and gambled among the crowds at the general saloons, began to separate and confine themselves to private play in the rear of the Parker House, and at similar places. There, if the external excitement of moving crowds and music was wanting, the interest in the sport arising from larger stakes was correspondingly increased, if that were possible. The amounts ventured in such secluded circles were immense; and almost surpass belief. Men had come to California for gold and, by hook or by crook, gold they would have. It was a fair and honest game, they thought, to hazard one's own money against that of another. Therefore, they staked and lost--staked and won--till in the end they were rich indeed, or penniless. But poor or rich, the speculative spirit continued (there was surely something infectious in the air !) and either in direct gambling or in nearly similar operations in mercantile, land-jobbing, or general business, the inhabitants of San Francisco, at this period of its history, seemed to be one great horde of gamesters.

from the San Francisco Annals, 1855