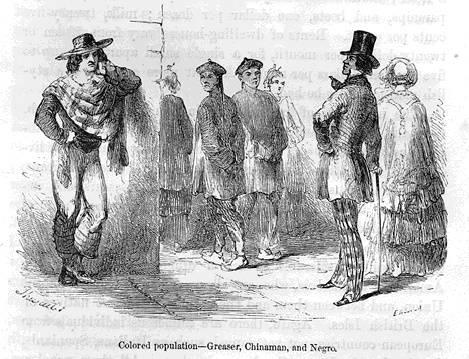 Illustrating the routine bigotry of the day, this image is captioned "Colored Population--Greaser, Chinaman, and Negro. The city was diverse, but not particularly integrated.

The multitude of foreign races in San Francisco--French, Germans, and Hispano-Americans, with all their different complexions, tongues, modes of dressing, amusements, manner of living, and occupations, so different from those of the Americans, and the numerous half-helot tribes of Chinese, Lascars, and negroes, who are still more unlike our people in their natural and acquired characteristics--all make the city the most curious Babel of a place imaginable. There are many less, though still considerable shades of difference existing among Americans themselves, who are drawn from all corners of the Union, and between them and the various distinctive natives of the British Isles. Again, there are numerous individuals from European countries, not yet named, such as Italians, Spaniards, Greeks, Dutch, Danes, Swedes, and others.

All these peoples, differing, in language, blood, and religion, in color and other physical marks, in dress and personal manner, mental habits, hopes, joys, fears, and pursuits, and in a multitude of nice particulars, stamp upon San Francisco a peculiarly striking and motley character. The traveller and the student of mankind will meet here with specimens of nearly every race upon earth, whether they be red, yellow, black, or white. Many of them are still seen in their national state, or at least with the broadest traces of their native qualities.

In some respects, however, perhaps most of them have been deeply impressed by the genius of the place. Such show the peculiar mark of Young America on the Pacific--the Californian, and especially the San Franciscan "go-ahead" disposition. Let the immigrant be from what country and of what personal temperament and character he may, a short residence here will make him a shrewder and more energetic man, who works harder, lives faster, and enjoys more of both intellectual and sensuous existence than he would be able to do in any other land. On any occasion of public excitement, such as a fire, a fight, an indignation or filibustering meeting, or the like, there is gathered together a multitude which cannot be paralleled in any other place, of stalwart, bearded men, most of whom are in the early prime of life; fine, healthy, handsome fellows. The variety and confusion of tongues and personal characteristics, the evident physical strength, reckless bravery, and intelligence of the crowd, make a tout ensemble that is very awful to contemplate. Turn these men into an angry mob, armed, as at all times most of them secretly are, with bowie-knives, and a legion of drilled soldiers could scarcely stand before them. These youthful giants are the working spirits of San Francisco, that have given it a world-wide fame for good and evil.