Somewhere in the depths of San Francisco’s inner city, there is a band of plotters organized into a deliberately primitive co-operative dedicated to nothing more sinister than buying the week’s groceries. It is The Food Conspiracy, the counter-culture’s unique version of the old-fashioned co-op where member families pool their buying power for better prices by buying in large quantities.

Unlike the more traditional cooperatives, there is no board of directors, no full or part-time employees and no store. Everybody pays $2 to join and the only big financial investment is the $500 put out as “front money” to get the operation going. The success of the Conspiracy rests on the assumption that its co-conspirators deal with each other honestly and fairly. To a remarkable degree that assumption appears justified in light of the Conspiracy’s experience.

The bread and butter operation of the Conspiracy is simple enough. Each week the member families decide which items they wish to purchase from a “shopping list” of produce available. The selection includes a fairly complete variety of fresh fruits and vegetables, several kinds of cheese, eggs, and five or six varieties of inexpensive fish. No meat. It goes too quickly and since it must be purchased by the half or quarter-section to get any real discount it is just too hard to handle. There is a separate monthly order for beans, rice, spices, honey, unprocessed sugar, flour and a variety of esoteric kinds of grain.

Early Saturday morning, usually around 6:30, previously assigned Conspiracy members rendezvous at various locations around the city. These are the purchasing teams. They do the buying early to insure the best selection and choice quality.

One team goes go the Farmer’s Market at 100 Alemany Blvd., where every kind of fruit and vegetable in season is available, directly from family farms near San Francisco. By and large, the farmers who sell there are honest and friendly, and the quality of food is several cuts above the standard fare of most produce counters. A second team heads for V-C Egg Company to purchase eggs and cheese. The eggs are guaranteed fresh and all types of cheese are available at wholesale prices. Fish is purchased at A. Paladini.

Once the buyers have done their work, all the food is taken to the distribution center of the week. Like some floating crap game, it is never in the same place twice in a row. One week it may be someone’s back yard, another time a store run by a Conspiracy member. Sidewalk garages, a local free school or the front lawn of someone’s home also have been used. The location gets out to Conspiracy members by word of mouth.

The Conspiracy usually starts business around 9 a.m. Members come by, select and weigh what they ordered on Wednesday, and settle up with a cashier appointed for the day. They are expected to buy exactly what they ordered, no more, no less. But this doesn’t always work out; eggs and cheese often run out early, or half the fish order doesn’t get picked up.

At noon the Conspiracy is “opened” and people who have failed to place an order that week or have yet to join are allowed to buy whatever is left over. (Nothing is ever supposed to be thrown away. Any final surplus is donated to the Indians on Alcatraz.) After that a clean-up crew repairs whatever ravages the Conspiracy may have inflicted on its host and the members melt back into the community until the next Saturday.

There are problems. While technically no members should have to spend more than two or three hours once a month working on the Conspiracy, some prove adept at shirking responsibility and several Conspiracy members find it necessary to devote ten hours a week or more to keep the thing going. Then there’s the health department. Health codes, if rigidly enforced, could put the Conspiracy out of business tomorrow, so the Conspiracy gives the health department a wide berth. By the time the police get around to checking out an irate citizen’s complaints that 50 longhaired freaks are buying oranges and apples right across the street from their lovely duplex, everybody has split.

The SF Conspiracy does not give out names or addresses, for fear of attracting too many people who might want something for nothing as much as for fear of health authorities. But the word has spread nevertheless, and the biggest problem facing the Conspiracy now is keeping down its size. It started about a year ago with 20 members; today it has about 400—and there is no sign that growth is slowing.

There are several other similarly operated “conspiracies” in the Bay Area. Not as reluctant to disclose their addresses, they are: The Willow Avenue Collective Conspiracy, 122 Willow Ave. in Corte Madera and 918 C Street, San Rafael. Orders must be in by 11 a.m. Fridays for pickup between 3:30 and 5:30 p.m. Tuesdays. Parker Good Eats, 2222 Parker, Berkeley. Organized by the Submarine Church Collective and open to anyone. Order by Thursday, pick up food on Saturday afternoon. 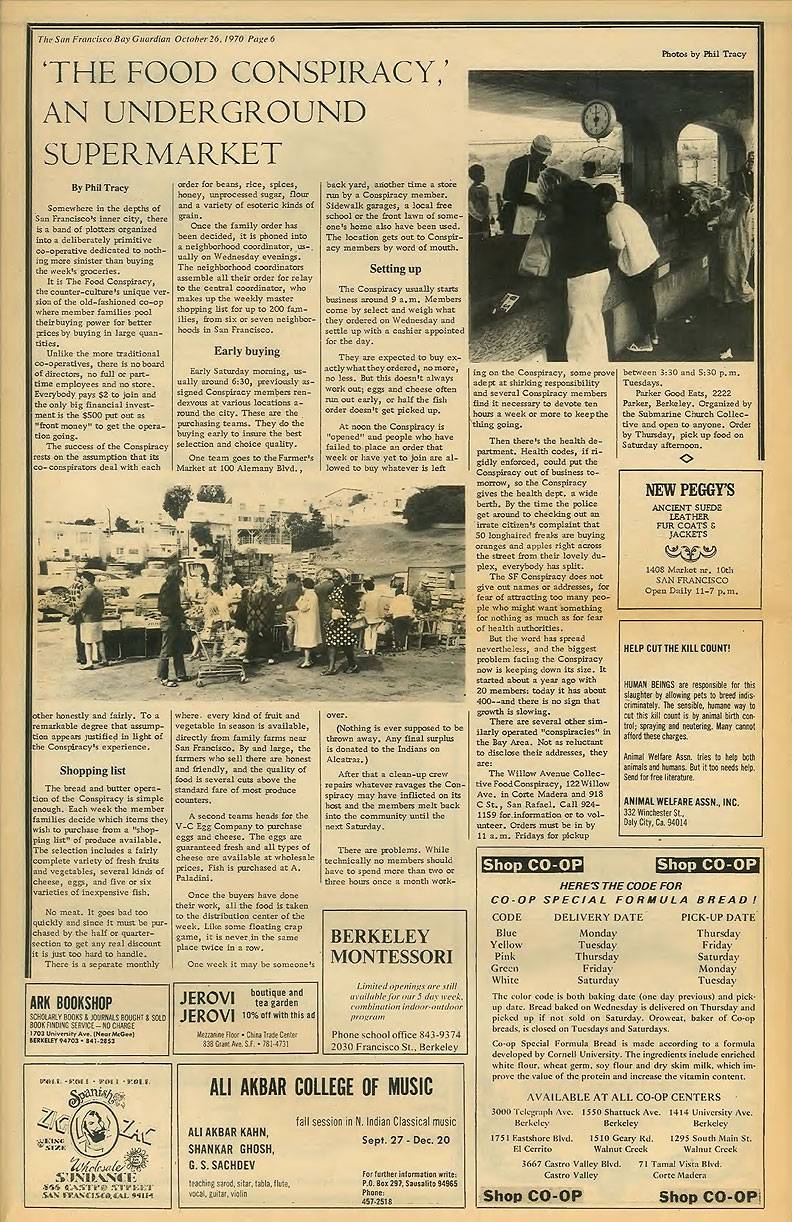