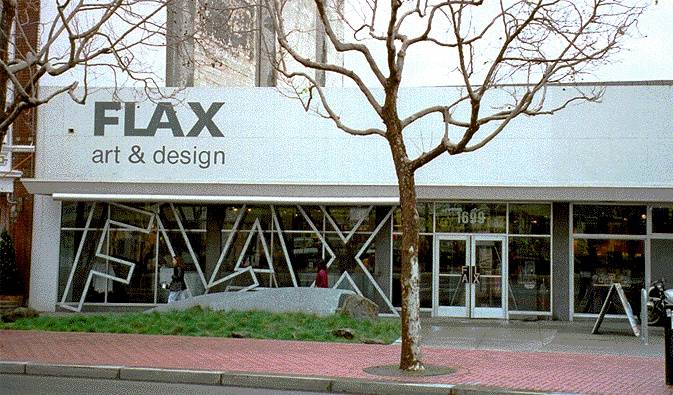 In early May 1986, PROCESSED WORLD interviewed Pauline Paranoia (P), and Stefan Ferreira Cluver (S), two of the main organizers of a unionization attempt at Flax Art Supplies on Market Street in San Francisco. Owned and run by Philip Max, the store employs sixty people, who are divided into different sections: thirty work the sales floor, another ten in the warehouse, and the last twenty are managers, office staff, and outside sales people. Flax workers opted for Service Employees international Union Local 87, which until now has mainly represented the janitorial workforce in many large office buildings in San Francisco. The interview was conducted by Maxine Holz (M), with occasional help from Lucius Cabins (L).

M: How and why did you start organizing? A brief history, please? Set the stage...

S: [laughter] An opinionated chronology!.. Things slowly began developing in the summer of 1984. Flax had instituted a policy of company meetings where all the employees would be called together and we would supposedly be encouraged to give him our suggestions and opinions. A group of employees drew up a list of suggestions on how to improve things in the store. Flax just took the list of suggestions and said: "No we can't do this, yes, we might do that..." There was no real discussion. He just did what he wanted and, more importantly, promised to do some things he never did. We got a sense that this was not going to get us anywhere.

P: But it was significant that a group of employees presented him with something--anything!

M: So these meetings backfired. They brought in democratic rhetoric, but people took it seriously, and it became the framework for further organizing--just what they wanted to avoid?

S: Right, right... The real breaking Feint was the annual review process... Every four months new employees get a set raise --after that, there is a yearly review. They are called in one by one and given "an opportunity to present their opinion on the matter" and then they're told what their raise will be. At the time we speculated that reviews in Oct. 84 were used to get rid of some employees who Flax felt were being a drag on the store--ones who were a little bit cynical or at least not as gung-ho as Flax wanted them to be.

P: Not as drone-like! They weren't androids!

S: What management said was "You seem to have some attitude problems--we don't feel that you're happy here," this kind of thing. There was absolutely no established criteria.

P: They didn't say "You haven't been filling your shelves" -- nothing you could quantify. So many people got told they had a bad attitude, it got funny.

S: At first, people came out of the reviews with these shocked expressions on their faces--they were very reluctant to talk about it. But, the fact that so many people were screwed over in the reviews, given measly or no raises, was a key element in getting people to talk. Part of our organizing effort was to break the ban on communication in the store. The situation got so wild that people actually started talking to each other, on an individual level, about how messed up this whole review thing was. The employees who approached Flax originally in the company meetings had a meeting of their own to see what they could do about the reviews.

P: That's when I first came into this scene. I've never experienced anything like it--first of all I'd never worked in a place where people had so much contact. I'd worked in big offices where you had your own desk in a row but you never talked as much. I was really impressed by the fact that everybody was being so open about the reviews because I thought "Oh that's such a personal subject" and most places you never talk about how much you make! The people who started the organizing kept it under wraps, since some people might have gone running to Flax. At first they only approached people they could definitely count on.

S: From one meeting to the next it went from 8 to about 12-16 people. We surprised ourselves with how many people were interested, so we said "What are we going to do?" We talked about looking into unions. I used to have conversations with a fellow employee about how we ought to get a union in this place. And we'd just laugh and say "No way." Given people's consciousness, you can't do that in a place like this. So, we just joked around about it. But people took that joke very seriously. Suddenly, at that meeting it was like "Why don't we give it a shot?"

The floor manager at first was really happy. There was so much socializing! People were going out to lunch together, they liked that people were getting friendly. What we were doing was establishing solidarity. We were very surprised positive reaction we got--after talking to people the first time we had that one-third needed to file for an election.

P: And that's why we went for it--it wasn't a case of the union coming in and forcing us to do anything.

M: Was there any point along the way where somebody said "Why don't we just organize ourselves instead of going to the union?"

P: Legal representation was important--later we saw just how important. The legal power of a union was really attractive to us.

S: And protection under the National Labor Relations Act in terms of organizing.

M: Do you have to contact a union to get protection for concerted activity under the NLRA?

S: Not necessarily, but if we were to call ourselves Flax Employees Organization...

P: We would still have to get recognized by the National Labor Relations Board, and that could take three years... It always seemed obvious to me it was better to go with a union because it's hard to get recognized independently.

S: We looked at a few different options: one guy talked to some folks at Teamsters, I have a friend who was working with UFCW (United Food & Commercial Workers), and one worker talked to her husband Richard, who was with Local 87 of the SEIU.

P: Local 87's way of selling themselves was their progressive history, their openness, the fact that we would write our contract. I especially liked that last one because it meant we would have control, ultimately, over the outcome of the whole thing. There was no way we would take pat clauses, We would write every word if it took all the time in the world.

M: Was there suspicion about unions among your coworkers?

S: Yes, because of the kind of people that work at Flax. Most of them have no union experience. They tend to by young, single, college-educated with a professional class background. They probably heard bad things about unions from their parents, or unions were outside of their experience.

People at Flax come out of more privileged sectors, often they have fine arts backgrounds and are more self-confident. They expect to go on to better jobs, to climb a ladder of some sort even if they don't know what that ladder is.

P: Several Flax employees are practicing artists. They have a sense of themselves as creative but they have to pay rent too.

S: People have this idea that "this job is not my life." Instead of trying to improve their work situation their attitude is, "If I don't like it, I'll quit and be a waiter or anything, I'll move on." And we were saying "Look, whether you like it or not, you're spending eight hours a day here, half your waking life, so why not make it the best work situation possible? You have to take a stand..." And there's the individualist trip you get here in the US. You as an individual can make it. Because of this people thought they could stand up and take a position against Flax, but at the same time they identified with Flax and the private enterprise lingo. This dichotomy has created difficulties, e.g. with Richard, who was used to more traditional "working-class" people. Working-class people feel disenfranchised, but they have less illusions that the boss looks out for them and they also have less of a sense of self-power. So in organizing you have to build a sense of solidarity, a sense that they can make a difference, that there is something worth fighting for.

Whereas at Flax, the problem is different. Employees fall for the argument that "Flax is paying us as much as possible." Their folks have been in management positions, so that's who they identify with. You have to convince people that they are workers! A key concept in our organizing was to get people to recognize themselves as workers and working life as a major part of their lives.