Finocchio's: The Carnegie Hall of Cross-Dressing

By Art Peterson. This article appeared in the Spring 2013 issue #202 of The Semaphore 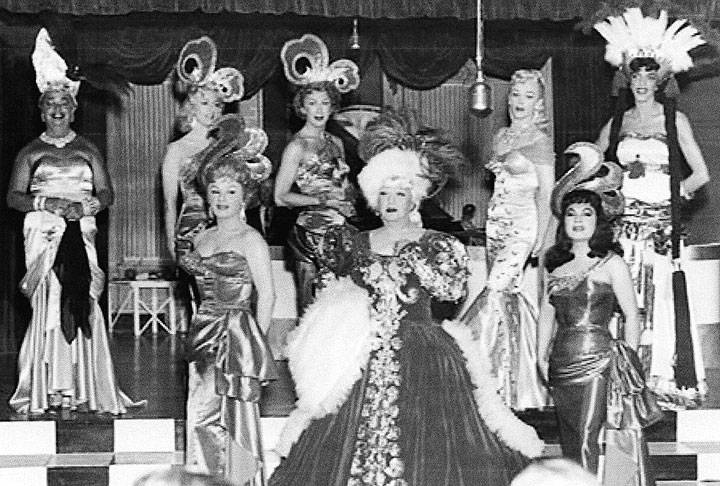 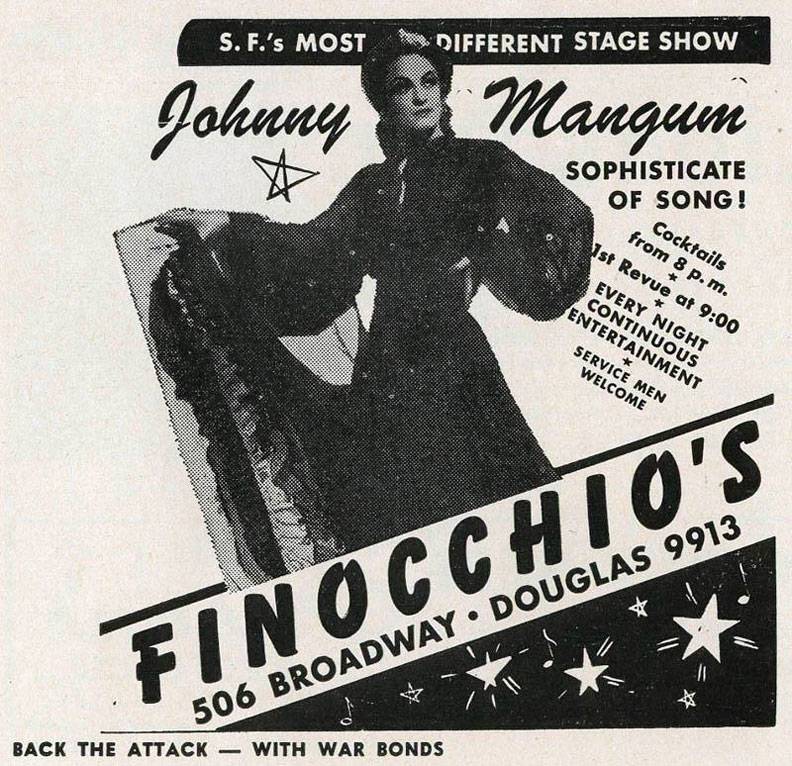 Harry Hay describing the pickup scene at Finocchio's around 1930, when he was a student at Stanford...

On November 27, 1999, the day Finocchio’s night club was to close, owner Eve Finocchio answered the phone as she had for many years. “Forget your troubles and woes and join us at Finocchio’s, family owned since 1936.”

As the premier female impressionist club this side of New York City, Finochhio’s, at 506 Broadway, “where all the most beautiful women are men,” did, indeed, have a long run, entertaining over its 63 years existence an estimated 300,000 patrons. Eve, by 1999 in her 80s, and running the club on her own since her husband Joe died in 1986, had decided to hang it up. Business was off (“People seem content to rent a movie and stay home.”), and her rent was being increased from $4,000 to $6,000 a month. Furthermore, in San Francisco since the 1970s, a man dressed as a woman was no longer exotic.

Thus, a venerable tradition came to an end, even one that predates the Broadway club. The original Finocchio’s opened as a speakeasy at 408 Stockton Street in 1929. There were no Gray Line buses lining up at this sanctuary for “bohemians and artists.” One of its denizens was Harry Hay, a founder of the Mattichine Society, a pioneering gay rights organization before the word “gay” or even “homosexual” were common. In an oral history collected by Chris Carlsson, Hay described the club protocol. “A waiter might approach you with a bottle of wine and a card sent over by a young man. If you weren’t interested, you turned over your glass and that would be it. If you were interested, the waiter would fill your glass and bring another. Then the young man would come over and the waiter would introduce him.”

Female impersonators were part of this scene, particularly one performer who drew enthusiastic crowds with an imitation of the legendary Sophie Tucker. The Finocchios, Joe and his wife Marjorie (who according to Hay, as “Madam Finocchio,” was the prime mover behind the club), moved the club to Broadway, but with a difference. Their prime audience for the new club would be heterosexual.

They hired men, mostly gay, but some straight and married, who knew how to dress as women, nudged along by a bountiful collection of wigs, feathers and lashes. The cast of usually 16 was fascinatingly authentic. “I wish I had legs like that,” the females in the audience would regularly enthuse. For those patrons who needed additional convincing, the MC had some advice. “The more you drink, the better we look,” he would say.

In addition to being able to turn oneself out as a beauty there were additional requirements. Foremost, most of the performers had to be able to sing like Judy Garland or Barbra Streisand or some other established diva, no pantomimes allowed, a demand that eliminated many a beauteous baritone. 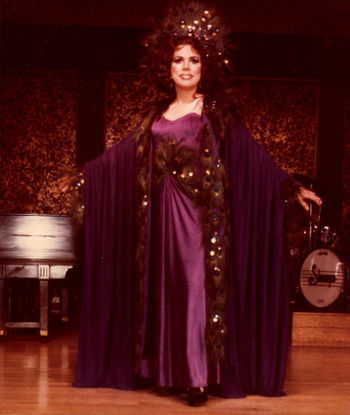 Further, the Finocchios ran a tight ship. Performers who arrived and left the club were expected to dress as men. “We were illusionists, not transvestites,” said one of the show’s stars, David de Alba. Joe Finocchio would claim he had the “cleanest show on Broadway,” but in the early days the police were not convinced. The exotic club had its share of raids. One bust came for selling liquor after 2:00 a.m. A Chronicle reporter noted the arrest came at 1:45 a.m. Joe did everything he could to avoid trouble. “They told me that if I run the place straight everything would be fine. They don’t want the entertainers to mingle around the customers. I promised to run it like a regular theater.” 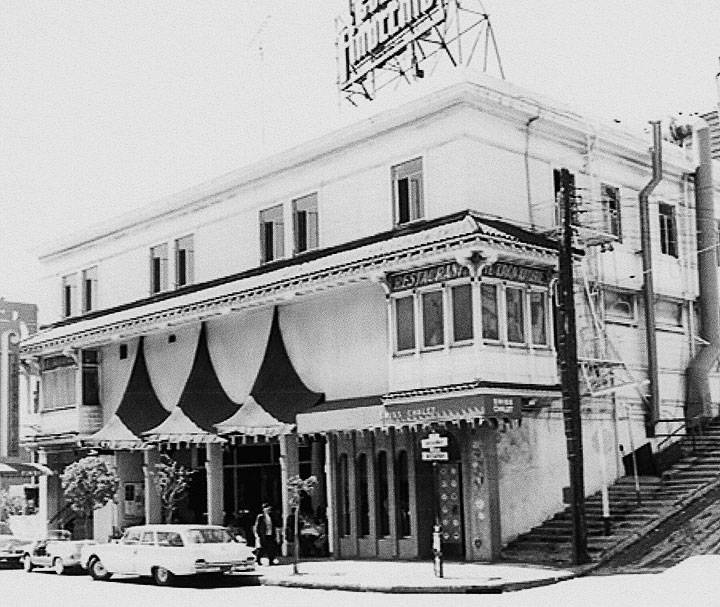 There was another dust-up in 1943 when the club was found to be selling booze to military personnel “outside of authorized hours.” Joe agreed to limit drinking hours for the military to between 5:00 p.m. and 10:00 p.m.

Of course, even with all the policing and self-policing, boys will be boys. “Stage-door Johnnies” were never in short supply. There were stories of after-hours carryings-on with celebrities such as Errol Flynn and David Niven. When Howard Hughes saw the show with his then-girlfriend Ava Gardner, he returned to the club and whisked away one of the performers for what turned out to be an extended relationship.

In general though the goings on were squeaky clean. One young man arriving from the Midwest seeking out his sexual identity, was disappointed upon arriving at the famous club when he was confronted by “men streaming in and out of the entrance, appearing overwhelming guy-like. They belched and patted their bloated bellies and spat more than seemed possible.”

On the street, Finocchio’s had a not altogether deserved reputation as a tourist trap. The cast put on four shows, six nights a week, and, for $3.50 admission in the 1970s; one could stay all evening at that price. There was no drink minimum, a high ball was $1.25, and an additional 25 cents would get you a Mai Tai.

Mostly what brought people to the club was the quality of the entertainers. There was the elegant MC Carroll Wallace, opening the show with the line, “In New York, Mr. Ziegfeld glorified the American girl ... Here at Finocchio’s, we glorify the American boy.” He would then launch into his trademark song, “I’m a singer, but I haven’t gotta voice,” and other standard patter such as, “If you want to take pictures of the performers, please give them time to pose.”

Not every performer fit the mold of a standard beauty. Russell Reed, for instance, weighed in at 300 pounds, billing himself as the “ton of fun.” A master of special facial inflections and gestures, his hilarious striptease that took him down to his red pajamas was an audience favorite.

Then there was Elton Paris, who would wander on stage with a deadpan expression, wearing dowdy women’s street clothes and tennis shoes, making people laugh before he said a word. Like Lavern Cummings, he could drop his falsetto voice down into the baritone range as he demonstrated on the song “Spinning Wheel” (“What goes up must come down”).

Perhaps the most successful of the performers outside the confines of the club was the 6-foot-6 comedian Lori Shannon, who went on to a supporting role as Archie Bunker’s drag queen friend in “All in the Family.”

While all this was going on, the Finocchio family remained very much in charge. Night after night, Joe would escort guests to their seats. The Finocchio children, and later the grandchildren, served drinks. The family did have some ups and downs. When Joe divorced Marjorie and married Eve, Marjorie retained part ownership of the club, and she would not allow Eve through the door. When Marjorie died, Eve took charge. After that it was said that a sure way to get fired from the club was to launch into the old song, “Margie.”

By 1999, Tallulah Bankhead, Frank Sinatra, Bob Hope and the other glitterati who once inhabited the club, were gone. Even the tour buses came only occasionally. Eve planned no special ceremony for the closing. Just the regulars doing their Whitney Huston and Madonna bits. But when Lawrence Ferlinghetti got the word that Finocchio’s was no more, he spoke for all of North Beach. “What a drag,” he said.