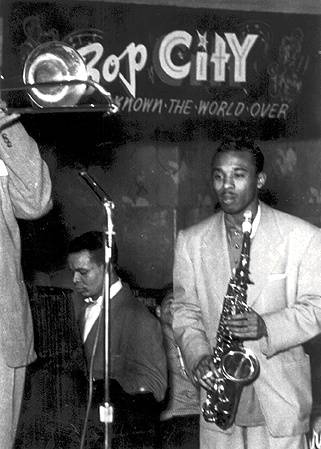 Excerpted from "The House That Bop Built" by Carol Chamberland, from California History Magazine, spring 1997:

In the post W.W. II era, San Francisco was very much in tune with the creative, experimental times. The Fillmore district, formerly a Japanese in Western Addition Japanese neighborhood, had blossomed into a thriving black community, bustling with restaurants, theaters, and nightclubs. All these establishments enjoyed a symbiotic relationship, and the action continued around the clock.

Talk radio personality Ray Taliaferro reflects on the Fillmore district that became home to Jimbo's Bop City Jimbo's Bop City and many other fine establishments: "It was a very thriving neighborhood. It was a neighborhood that came out of World War II. Prior to 1940, there were fewer than 5,000 black people in the city of San Francisco out of a population of 700,000. And at the conclusion of World War II in 1945, there were 47,500 black people. The Japanese-Americans of course were incarcerated during World War II in detention camps, and that left all that property available. That's when blacks moved into that neighborhood, and out of that grew this wonderful culture, this industry, this artistry."

Black people had arrived by the thousands to help the war effort by working in the newly erected Kaiser shipyards. Work was strenuous and housing was cramped, but everyone had jobs and money to spend. San Franciscans fiercely supported a round-the-clock network of clubs and restaurants. "And Jimbo, together with many other musicians and fine entrepreneurs, black entrepreneurs," adds Ray, "were responsible for having developed that era."