This article originally appeared in It's About Times, the Abalone Alliance newspaper, October-November 1983 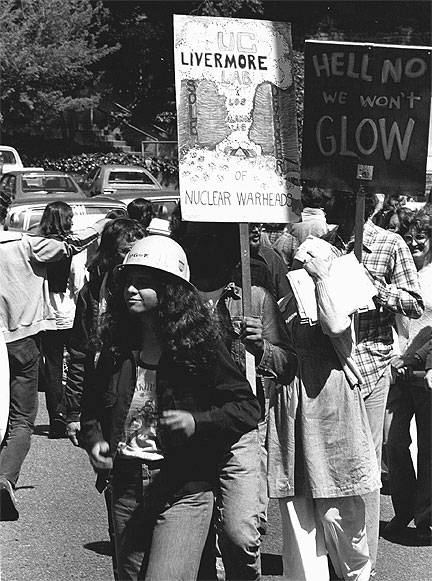 While disarmament groups demonstrate at Vandenberg and Livermore, several organizations are trying to stop manufacturers from building weapons systems. In California's "Silicon Valley," the concentration of high-technology industry south of San Francisco, nearly $4 billion in defense contracts were received in fiscal year 1982 — an increase of 32% from the year before. Hundreds of firms are involved in this military work: per capita, the area is the most defense dependent in the country. Almost everyone is connected to the industry — even among the people arrested at Livermore.

Focusing on war spending at home means convincing people who work in the electronics industry to examine their own contribution to the war effort. The problem is tricky — what does one ask of a person whose livelihood and social life depend on the war industry?

Community Against Nuclear Extinction (CANE), an Abalone Alliance group based in Palo Alto, writes leaflets about specific defense companies and distributes them to workers. Organizer Mary Klein explained, "We're not asking people to quit their jobs, but we are trying to persuade them to talk about the issue among themselves and to organize to get their company out of defense spending."

CANE has received several letters and phone calls from workers, thanking them for leafletting. Several said they hadn't realized their company made weapons components. Embarrassed executives issued memos to workers acknowledging the defense contracts, but defending them.

At Westinghouse, management went to the trouble of installing new "No Trespassing" signs along every fence section. That didn't stop Harry Adams, who works on the propulsion system for the Trident submarine at Westinghouse, from joining CANE in demonstrating against the company. According to Adams, the leafletting does motivate workers to talk about defense employment.

On the other hand, Adams doesn't think CANE's organizing style is particularly inviting. "I didn't feel comfortable standing in a circle, holding hands, and looking up into the sky. And if I didn't feel comfortable, just think how the other workers felt." Adams isn't asking CANE to give up its ideals, but to be aware of how it's perceived by those they're trying to reach. He suggests round table discussions between plant workers and disarmament organizers to help the two groups understand each another.

The Mid-Peninsula Conversion Project is attempting a completely different approach. It is working with union leadership and Congress to convert the weapons industry to production of socially useful products. "Conversion is difficult," staff director Joel Yudken explains, "because it challenges the priorities of powerful interests. The weapons builders are the people lobbying Congress to build bigger weapons systems. Conversion forces them to think in different ways about management, investment, product development, technological innovation, and workplace organization."

"We're looking to convert the entire industry, not just one company," Yudken continues. "Pressure for federally supported conversion has to come throughout the industry, from the rank and file up to management."

The International Machinists Association drafted conversion legislation which was introduced to Congress in 1977, but never reached the floor of Congress. Eighty-five percent of the United Auto Workers unions have endorsed a strong conversion resolution, and even McDonnell-Douglas executives want their company to receive more civilian contracts.

But neither the unions nor the military contractors have a program to educate the rank and file about conversion. Many union members oppose the concept. Ken Banda, president of the Machinists at Lockheed, told former weapons designer Robert Aldridge, "Our members make the highest wages in the Santa Clara Valley. Why should we care about conversion?"

Harry Adams shares the skepticism about conversion. Workers feel the vision isn't practical: Westinghouse converted from consumer and industrial products to war production because there's more money in it. Although Adams is active in the union and opposes defense spending, he never hears about the meetings between union leadership and the Mid-Peninsula Conversion Project. The meetings are good for the leadership, he said, but the information never reaches the shop.

Another defense worker who works on the Trident at Westinghouse also expresses his distrust of the conversion approach. John (not his real name) argues that conversion leaves management intact, that the rank and file are an independent lot who have no reason to trust the unions or management. John prefers to protest war production by working as little as possible and by redoing work so the inspectors don't find the mistakes.

Yudken acknowledges the hostility toward conversion on the shop floor, and believes it shows the need for fundamental education. "Conversion isn't easy. We're trying to change people's patterns of thinking and show them other options are available. Pressure for conversion has to come from the shop level."

Until that happens, workers who want to leave military work usually must act individually, making a painful decision to quit their jobs and to try to start over with another employer. Some of the workers leafletted by CANE hope to organize a support group for Santa Clara defense workers. But no organization has offered a program to help workers in the defense industry who want out.

Concern about the implications of military work is spreading even among Silicon Valley's traditionally apolitical technical and management elites. Several groups of professionals, technical workers, and even managers are organizing their own educational programs. High Technology Professionals for Peace, based in Boston, has produced a pamphlet warning about the perils of defense employment – over specialization; invasion of privacy, and isolation.

A West Coast group, Computer Professionals for Social Responsibility (CPSR), publishes articles about the absurdities of computer-related defense programs. CPSR attempted to sponsor a booth at the National Computer Conference in Anaheim last summer, but was denied permission because it was not "in keeping with the purposes of the conference." Of course, companies demonstrating war computers were judged to be in keeping with purposes of the conference. CPSR members leafleted outside instead.

Creative Initiative of Palo Alto draws many of its members from middle and upper management of companies in Silicon Valley. Focusing its educational efforts on defense company managers and the business community, CI makes presentations and shows films at workplaces and meetings of management groups.

Rather than focusing on conversion, the group is seeking a "World Beyond War" in which society recognizes that war is an obsolete method of resolving conflict. Creative Initiative organizers hope to make nuclear war the focus of the 1984 elections.

CANE, meanwhile, is continuing its organizing effort. Tom Linberger, who is active both in CANE and the Santa Clara County Central Labor Council, believes that most people recognize the military buildup is wrong and is hurting the country. "But workers feel there is nothing they can do about it. We're trying to show them they can do something about it."