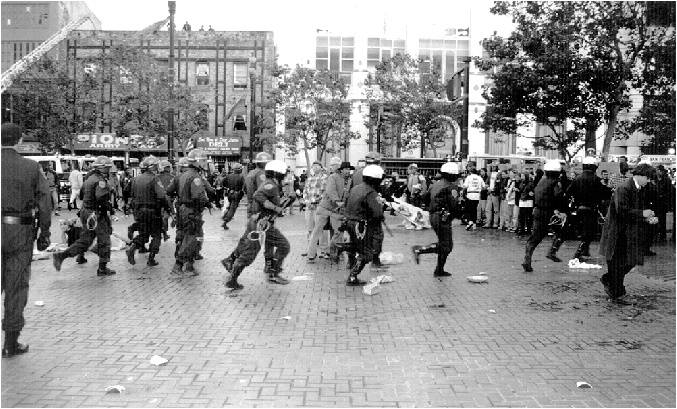 Food Not Bombs activists are scrupulous about video-recording every breach of their civil liberties, every act of police brutality, and they've accumulated enough bruises and broken bones to incite the envy of the most assiduous martyrs. Keith McHenry, the jovial Captain Ahab of FNB, at one time faced life imprisonment under California's three strikes law for charges stemming from Food Not Bombs arrests. Identified as the leader of the ostensibly leaderless organization, he became a celebrity for being arrested over 100 times by the SFPD and for antics such as trying to make a citizen's arrest of Giants' owner Bob Lurie for aggressive panhandling at a Board of Supervisors meeting on building a new stadium at taxpayer expense.

Another food felon, Robert Norse Kahn, served thirty days out of a sixty day sentence at San Bruno Jail for knowingly violating a court order against Food Not Bombs. He was found guilty by a jury which was instructed by the judge to determine solely whether he had, in fact, given a bagel to a homeless person. Since Kahn never denied this, but contended he did so for political reasons which the judge refused to allow the jury to hear, it is not surprising that they arrived at a guilty verdict. (To be sure, Kahn makes a freaky impression: going by the name Bathrobespierre because of his tattered bathrobe and Jacobinite rhetoric, he looks like a demented monk.) He served half his sentence before getting time off for good behavior--not surprising for a person whose crime was feeding a beggar.

Other Food Not Bombers have been convicted on trumped up felony and misdemeanor charges, but most eventually get dismissed. A day or two in jail and a strip-search is considered sufficient punishment to reform one of such wicked ways. But no expense was spared in enforcing the prohibition. A unit from Special Forces was deployed to enforce the anti-philanthropy laws. Some claim that behind the repression lurks a right-wing cabal within the police department called Cops For Christ, an anti-red fundamentalist group with FBI ties. Certainly top brass in the SFPD take an inordinate interest in Food Not Bombs activities; but paranoia, however warranted, can also be self-aggrandizing.