Difference between revisions of "FISSURES IN GAY 'MECCA'" 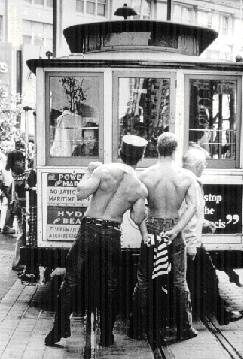 "Most male homosexuals are still trapped by notions of masculinity. It is a familiar story--the oppressed worships the oppressor. Listen to the names of some of America's gay men's bars--The Stud, The Tool Box, The Barn. What passes for gay men's art--including murals in these bars--often depicts such masculine characters as the Body-Builder, the Motorcyclist, the Cowboy. What goes on inside most of these gay bars often preserves the notion that the people inside are "real men," too. The billiard table, the sawdust on the floor, the leather vest on the bartender, and, most of all, the men standing around with carefully groomed indifference while quaffing their beer. The gay man's quest for masculinity, or exaggerated masculinity, cannot be dismissed as mere evidence of his sexism. Beyond that, it is evidence of oppression, evidence of how a minority is overwhelmed by the values and style of the majority.

KIM: Once I saw that you could negotiate from vanilla, all the way through that I could have my friends watch, the first time I got tied up, and the second, and the fifth, and then, I liked having them watch -- you could develop interrelatedness to the other people who were at those parties frequently.

MARK THOMPSON: I think there's always been kind of an uneasy alliance. The leathermen and the drag queens were both marginalized, even though they were opposite ends of the spectrum. You know, "Those nasty sadists -- that's not us. We're the nice gays. Those are the bad gays." So there was that element, even though I think a lot of them were hypocrites. Of course, they'd say that during the week, and then on Saturday night, they'd be with their feet up in the air, in a sling at the Slot or some place like that, hoping no one would notice.