Next Stop #10: The House Un-American Activities Committee (HUAC) Hearing and Riot of 1960

Since the days of the Mother Lode and the Comstock, California's economy had soared on a series of booms like a rocket with several stages, jet-propelled by a new explosion each time a previous impetus began to fizzle. In this boom-minded land it was perhaps inevitable that the eye of some energetic promoter would alight on the eucalyptus and he would have the same feeling James Marshall must have experienced when he first sighted the fateful gleam in the tailrace at Sutter's Mill in 1848. 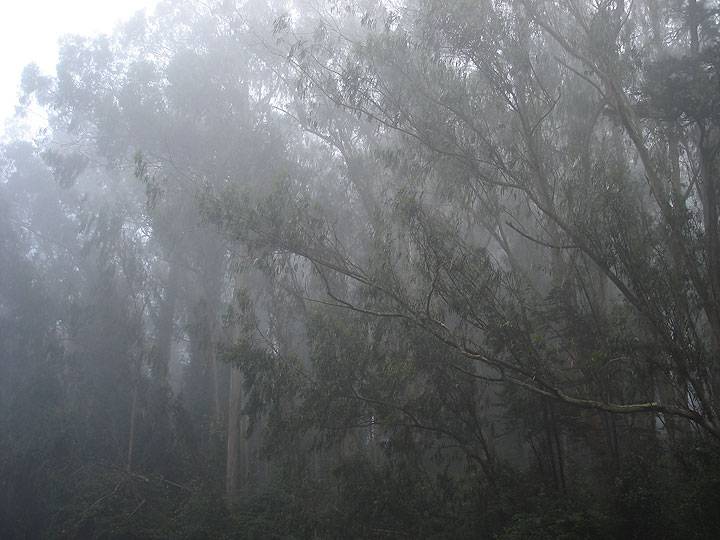 Eucalyptus dominate the Sutro Forest, here in a winter dance with the January fog, 2007.

The promoter's name has been lost to history, but the Eucalyptus Rush began half a century after the Gold Rush. The word got around quickly; beginning about 1904 the news began to spread that the eucalyptus was exactly the tree to put an end to the U.S. "hardwood famine." The eucalyptus was a timber tree in Australia, and a government booklet described its virtues as a possible source of hardwood. The State Forester glowingly predicted: "It would appear that this State will become within the next twenty years the base of hardwood supply and the home of hardwood manufacturing. The new industry will produce a greater wealth than oranges."

Promoters jumped in by the score. They bought up big tracts of land at prices around $15 an acre, set out eucalyptus seedlings that cost them only $5 a thousand and sold the land for $25 an acre, promising that within a decade the timber would be worth ten times that price. Modest proposals appeared in newspaper and magazine ads: "Put your surplus into eucalyptus and after ten years you can live on the income the rest of your life, and when you are gone your children and your children's children will perpetually reap the same."

Lured by the same promise of perennially flowing wealth that caused Americans by the millions to invest in gold mines, real estate, and oil wells, the eucalyptus boomers put cash on the line for title to a few acres planted to the magic new money tree. All over the State the seedlings were set out in forests that filled canyons and covered hillsides and bottomlands. The excitement lasted about eight years. Then somebody made the embarrassing discovery that there was more than one kind of eucalyptus. There were, in fact, in Australia a staggering six hundred species. And the principal kind imported here, the blue gum, was no good for timber, even in Australia.

Somebody might yet have imported the proper species and built up a thriving industry if it had not been for another disconcerting revelation. The trees used for timber in Australia were not ready for harvesting until they were several hundred years old. Few investors were sufficiently patient. So went the Eucalyptus Rush. And there went the fortunes of legions of the hopeful who had been certain that they had a sure thing.

Yet once-barren hills and valleys of California's lowlands are still clothed in thick forests-the overgrown remains of the big hardwood boom. And the trees have yielded scenic benefits quite apart from those expected by the planters. The huge groves planted by developer Frank Havens along the hills behind Berkeley and Oakland have proved valuable for another reason. They intercept the summer fogs that roll in from the ocean; the moisture condenses on their leaves and drips to the ground like steady rainfall, building up the water table. Rain gauges in Berkeley have measured seasonal fog-drip deposits of ten inches, equal to about half the normal annual rainfall for the area. Doubtless there is an equivalent effect in San Francisco's groves, particularly in thickly wooded Sutro Forest.

The fog-collecting capacity of the eucalyptus is partly a result of the same vertical foliage arrangement that gives the tree its reflective quality. The leaves, hanging loosely downward, present a barrier to the breeze-borne drops of fog vapor, which slide down the vertical1caf surfaces to the ground.

Oddly, the juvenile leaves-on very young trees and new branches-do not have this quality; they are attached more rigidly, in conventional fashion. Then, at ages depending on the species and location, the leaves cease reaching upward for the sun and begin to hang down. Botanists puzzling over this peculiar change finally pieced together the explanation. In many species of both plants and animals, the individual when young passes quickly through the same stages of evolution that the species went through over a period of thousands of years. Every high-school biology student knows the formula: "Ontogeny recapitulates phylogeny." The history of the individual repeats the history of the species. The eucalyptus species went through some drastic changes. Evidently at some time in the distant past in its native Australia, the eucalyptus lived in a temperate climate where moderate sunlight was interrupted by intervals of overcast or stormy weather. The leaves, like those of most other vegetation, reached upward and outward to maximize their exposure to the light.

Slowly, owing to little-known causes, the Australian climate began to change, becoming increasingly sunny and arid. To cope with the new climate, the leaves slowly, over hundreds of generations, narrowed and began to hang vertically in order to turn the narrowest possible edge to the sun and avoid desiccation. In this odd habit of eucalyptus leaves, we read the record of immense climatic changes that probably covered large portions of the earth.

To see the results, look at some grove, such as Sutro Forest, where there has been little recent interference with natural processes. Here the prolific qualities of the eucalyptus are readily visible. The aromatic buds of the tree are thick under foot, and young seedlings, with their primordial upreaching leaves, sprout wherever there is sufficient light and moisture. Many a sapling, like an adolescent with both childlike and grown-up qualities will bear juvenile and adult foliage simultaneously. 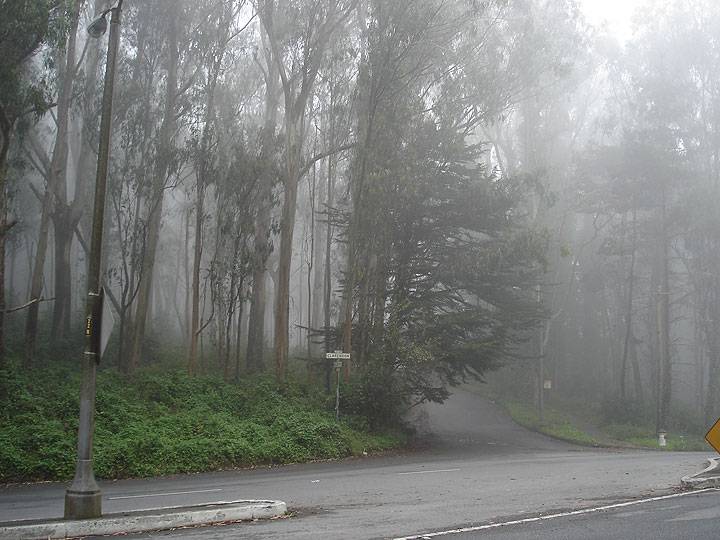 Striking changes took place in the eucalyptus over the eons as it spread across parts of barren Australia, where there was little competition from other trees, and adapted itself to innumerable varying climates and terrains. The result was the development of the six hundred species, most of which are unknown in California. But perhaps a hundred species have been introduced into this State. Of these, about two dozen are fairly common and supply endless variety to the city's eucalyptus landscapes.

There are two main groups-those that shed their bark and those that retain it the year around. The former are known to the unpoetic Australians simply as "gum trees," owing to the gummy substance that flows out of the wood to heal a wound. Because of its rapid growth (the record is seventy-five feet in ten years) the principal species of gum tree imported into California is one whose name comes from the color of juvenile foliage-blue gum, Eucalyptus globulus. If you can't identify a eucalyptus, call it a blue gum and chances are nine out of ten you'll be right. It is notable for its height—this is the true "skyscraper eucalyptus," commonly rising more than one hundred and fifty feet-and for aromatic pods that usually grow singly on the stem rather than in clusters, as do those of most other species.

The best-known blue gum in San Francisco is probably the spreading specimen in the middle of the Sixth Army Parade Ground in the Presidio, planted in 1876 in commemoration of the Nation's centennial. The tallest eucalyptus trees in North America are in the grove of blue gums near the West Gate of the University of California campus in Berkeley. They were planted in 1877, arc about two hundred feet tall, and if transplanted in San Francisco's Union Square would tower over all the surrounding buildings. Near the campus grove, alongside the Life Sciences Building, is a superb example of Eucalyptus viminalis, known as manna gum or ribbon gum, from its habit of shedding bark in long dangling streamers. The underbark is often a striking cream color, and the species is sometimes called "white eucalyptus." There are several dozen of these in the Panhandle of Golden Gate Park, along with the more numerous blue gum. Occasionally the branches of the viminalis grows in graceful pendent fashion, resembling that of the weeping willow. There are several of this weeping kind in San Francisco along Park-Presidio Boulevard between Geary and the Presidio tunnel.

The most colorful species is Eucalyptus ficifolia, the trees that burst out across the city at various times of the year with explosions of red and orange, scarlet and crimson and cerise, along the streets and avenues, in backyards, in parks and gardens. Like other eucalyptus, the ficifolia is an unpredictable individualist. You may plant dozens of a particular species and find no two alike. The showy row of ficifolia along Bay Street at Fort Mason illustrates the variety of colors that turn up in a single planting.

The streets of San Francisco, which for a century have been treeless as the sand hills were, are being lined with eucalyptus and other species under the leadership of the city's street-tree chief, Brian Fewer, a tree planter in the best tradition of John McLaren and Adolph Sutro. Broad Van Ness Avenue, hitherto noted principally for its garish chrome-and-glass automobile emporiums, may well become the eucalyptus showplace of North America, as these trees do for the avenue what the chestnuts have done for the Champs Elysees. Eventually Van Ness will become a eucalyptus boulevard, displaying the tree in its innumerable variations.

Several species have odd-shaped leaves, unlike the typical long, narrow scythe-shaped leaves of the blue gum. The leaves of the ficifolia are shorter and broader than those of the blue gum. The silver-dollar eucalyptus (Eucalyptus polyanthemos) has dollar-sized silver-blue juvenile leaves which develop into a pointed oval shape. Three of these trees can be seen just west of the playground near the Nineteenth Avenue entrance to Golden Gate Park. The silver mountain gum (Eucalyptus pulverulenta) cannot be mistaken for any other species; its round silver-gray leaves surround the stems like an order of shish kebab on a skewer. Several young "shish kebab" trees grow on the south side of Golden Gate Park's Main Drive one hundred and fifty yards east of the Park-Presidio underpass.

The best place in the city to identify various kinds of eucalyptus is in Saint Francis Wood, the superbly landscaped residential district just west of Mount Davidson designed in 1912 by the late Frederick Law Olmsted, Jr. The trees here are trimmed and do not attain their full size and shape, but their trunks and foliage are easily identifiable. Along Saint Francis Boulevard and Santa Clara Avenue are visible the mottled and cream-colored trunks of the manna gum. On San Benito Way, Olmsted planted the silver-dollar tree and on San Leandro Way the red-flowered ficifolia. On Santa Ana Avenue are lanes of the broad-leaved desert gum and on Yerba Buena Avenue the weeping red gum, with pendulous boughs of lacy foliage, the most widely distributed species in Australia. 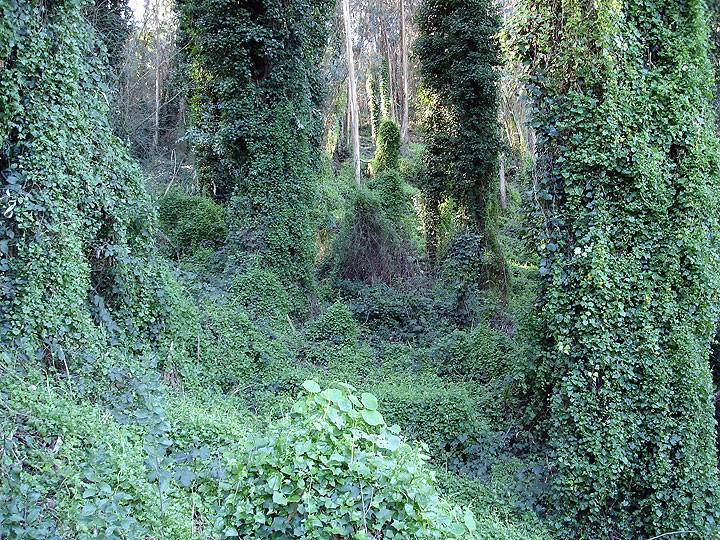 Many eucalyptus groves in San Francisco are now choked with cape ivy, one invasive species being overwhelmed by another, and together destroying native habitat.

There are two particularly notable eucalyptus trees in Golden Gate Park. One is a spreading, triple-trunked blue gum opposite the old "Crystal Palace" Conservatory. It is reputed to be the oldest tree in the park, planted by some unknown settler in the 1860s, the decade before the park was laid out. The other is the hauntingly exotic Eucalyptus cinerea growing south of the Main Drive in a big meadow just beyond the museum area. Its leaves are a shimmering silver-blue, and in certain slants of sunlight it seems scarcely real, standing uncertainly at the far edge of the meadow against a wan of conventional foliage like a wraith of a mirage the quintessence of the city's eucalyptic splendor.