A few months ago I was at a Standing Rock demonstration with my friend, Richard, in downtown San Francisco. I’ve known Richard since the ’80s when were both in an affinity group called Enola Gay. A nice young man asked us how long we had been doing this, you know, demonstrating, being in the streets, resisting. We said it has been about 50 years for each of us. 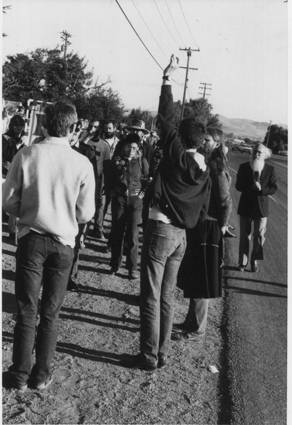 A new book, Lavender and Red mentions one of Enola Gay’s actions in 1984. The book says that this was the first recorded instance of civil disobedience to confront AIDS. Maybe it was. What’s important, I think, is that as the book says, before AIDS activism there were political movements that attempted to connect the resistance to war, racism, sexism and homophobia. ACT-UP learned about affinity groups, consensus decision making, direct action, and nonviolent civil disobedience from the work that was done earlier.

Anti-militarism, Direct Action against the Epidemic, and Movement History

In September 1984, several gay men poured fake blood at the entrance of a nuclear weapons laboratory to protest the funding of the arms race rather than research on AIDS. Blocking the road to Lawrence Livermore National Laboratory, roughly thirty-five miles from Oakland, they added a new layer of meaning to the symbolism of death that marked antinuclear protest. In the words of protestor John Lindsay-Poland, they sought to make visible that “every contract this lab gets has blood on it,” whether due to military assault or because dollars spent on defense could have been spent on AIDS research or care. The protestors were members of Enola Gay, a group of radical white gay men active in the antinuclear and Central America solidarity movements and whose name reappropriated the moniker of the plane that dropped the atomic bomb on Hiroshima, Japan. Their action was the first recorded instance of civil disobedience to confront AIDS.

—from Lavender and Red, Liberation and Solidarity in the Gay and Lesbian Left by Emily K. Hobson, 2016, Chapter 6, Money for AIDS, Not War

The blood was real and it was mine. We tried to gather blood from a few of us, but when the opportunity arose, I was the only one available. I knew Scotty Brookie from when I lived in Santa Cruz and I knew he wrote for Gay Community News, a Boston newspaper. After the action, I asked Scotty to write something for GCN, I think because it was way more political than any of the Bay Area queer newspapers.

Here is the article from Gay Community News October 20, 1984, quoted above

LIVERMORE, CA — A group of gay men poured their blood on the road leading to a nuclear weapons plant here early in the morning of September 23, in protest of the money being spent on weapons and the lack of money being spent on AIDS research. They were among several hundred demonstrators who began gathering at 4:00 a.m. at the Lawrence Livermore National Laboratory, one of the primary centers in the U.S. for the research and development of nuclear weapons.

Over 100 people were arrested on charges of trespassing, blockading thoroughfares during the day of the demonstration, which was called by the Livermore Action Group (LAG). All were released on their own recognizance on the following day.

The pouring of the blood was organized by Enola Gay, an affinity group of gay men. The group, which takes it name from the name of the plane that dropped the atomic bomb on Hiroshima, was also responsible for the mock invasion and takeover of Angel Island in San Francisco Bay last year following the invasion of Grenada. According to Jack Davis, a member of Enola Gay, 13 men participated in the action which he termed a “blood and money ritual.” None of the men participating in the ritual were arrested.

The ritual took place in several parts, according to Davis, starting with a chant to draw attention to the beginning of the action. The chant was followed by a litany of the needs of people with AIDS. “The idea of the litany was taken directly from the memorial for Bobbi Campbell,” said Davis, “and the recitation of needs was taken from a speech Bobbi gave at the National March for Lesbian and Gay Rights.” Bobbi Campbell, who died of AIDS this summer, was well known around San Francisco as the “AIDS poster boy,” and was nationally known by the time if his death for his work on behalf of people with AIDS.

The litany ended, said Davis, by acknowledging “the gay brothers who have died from AIDS and who will continue to die. We want no more money for weapons research. We want money for AIDS research. And we intend to survive.”

Following the litany, the group moved into the street and formed two lines facing each other, blocking the road. Chanting “The blood of gay men is sacred. It is holy. Workers who pass here will cross this blood every day,” the group poured a bottle containing their own blood onto the road.

After the pouring of the blood, the group moved to a side of the road where each man pricked his finger, smeared blood on a dollar bill and made a personal statement about the action. ”Every contract this lab gets has blood on it,” commented John Lindsay-Poland, another participant in the action, in a telephone interview. “When we put blood on money, we’re not trying to trivialize it, we’re making the blood visible.”

Davis commented that a member of the group had recently been diagnosed with AIDS, “and that was one of the main reasons we wanted to do this action.” He added that the group chose this type of action “because the image of blood is a powerful one.” He described the reaction of the 50 to 60 people watching as “respectful and interested.”

“These life and death issues with AIDS are very powerful because they are personal,” said Lindsay-Poland, reflecting on the action. “The life and death of a single person involves so much. The weapons that are being developed at Livermore contemplate the deaths of millions and millions of people. Profound change needs to take place.”

Describing his personal reasons for protesting, Davis recounted his work at a Gay men’s health clinic. “We’re seeing lots of positive test results for sexually transmitted diseases,” he said. “And when I think of all these beautiful men [getting sick], it feels like a war.”” 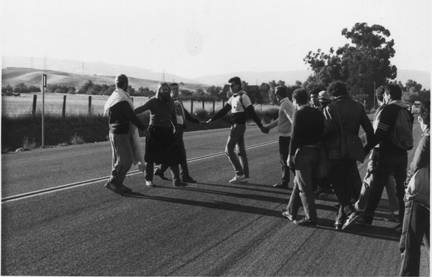 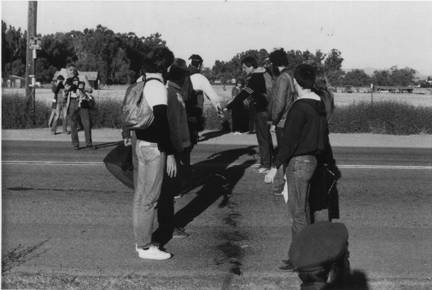 Here is a partial list of people in the photos: John Ashby, John Lindsay-Poland, James Groleau, Jack MacDonough, Kris Garten, Kevin Langley, Robert Gluck, Sean McShee, Jack Davis. There are a couple of people that I can’t identify, some like John Lindsay-Poland and James Groleau joined Enola Gay just for this action Richard Bell was a member of Enola Gay at the time, but was not at this action.

Formed in July, 1982 and named after the airplane that dropped the bomb over Hiroshima (which was in turn the pilot's mother's name), this Gay men's affinity group of Livermore Action Group has been meeting regularly since then and now meets every week. Our goals are for Gay men to express anti-nuclear and other progressive politics, using cooperative, pro-feminist, consensus process that tries to affirm each other's needs (and differences) while working together on common actions and outreach. Some of the activities Enola Gay has been involved with include: bringing a gay presence to blockades at Livermore Lab, Port Chicago, Univ. of Calif., Vandenburg Air Force Base and Diablo Nuclear Power Plant; media on Gay Life. Coming Up, Letters to B.A.R. and Direct Action; leafletting & tabling on anti-nuclear/anti-intervention issues, for rent control in S.F., for Dianne Feinstein's recall, actions at right-wing Central America consulates to protest repression by those governments and U.S. help; the Kissinger and Weinberger demos and week of Democratic Convention demos recently; as well as sponsoring benefits and fundraising activities for LAG, networking with other affinity groups, nonviolence training & consensus workshops and joining with ad hoc demos and actions to support other groups' issues.

Maybe you can see on the flier, one of the dollar bills upside down reads “Gomorrah for a Tomorrah”. 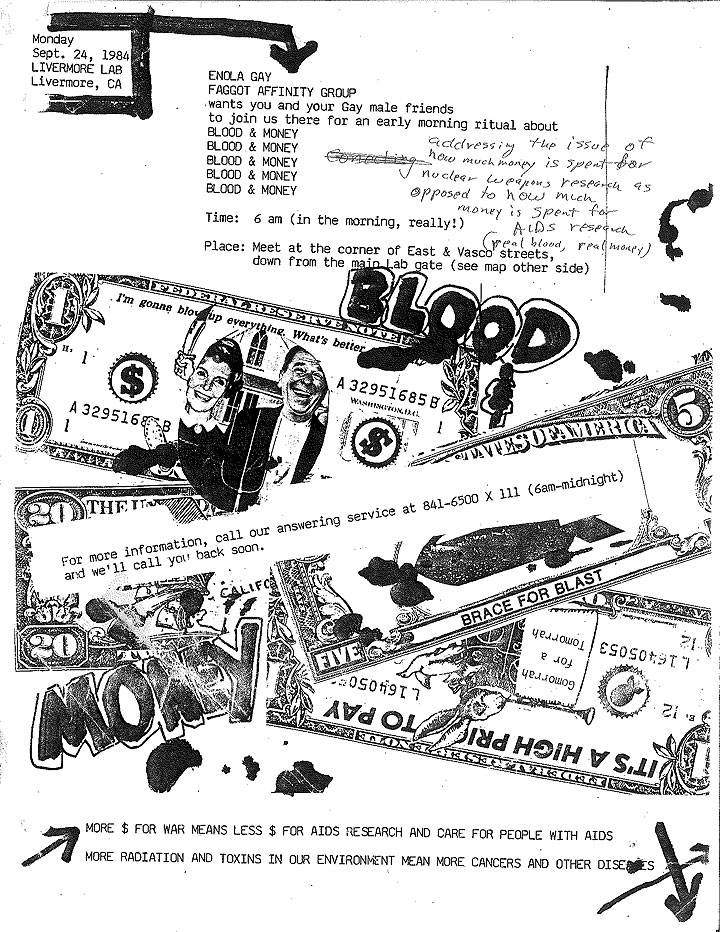 Front side of Enola Gay flyer at September 1984 action. 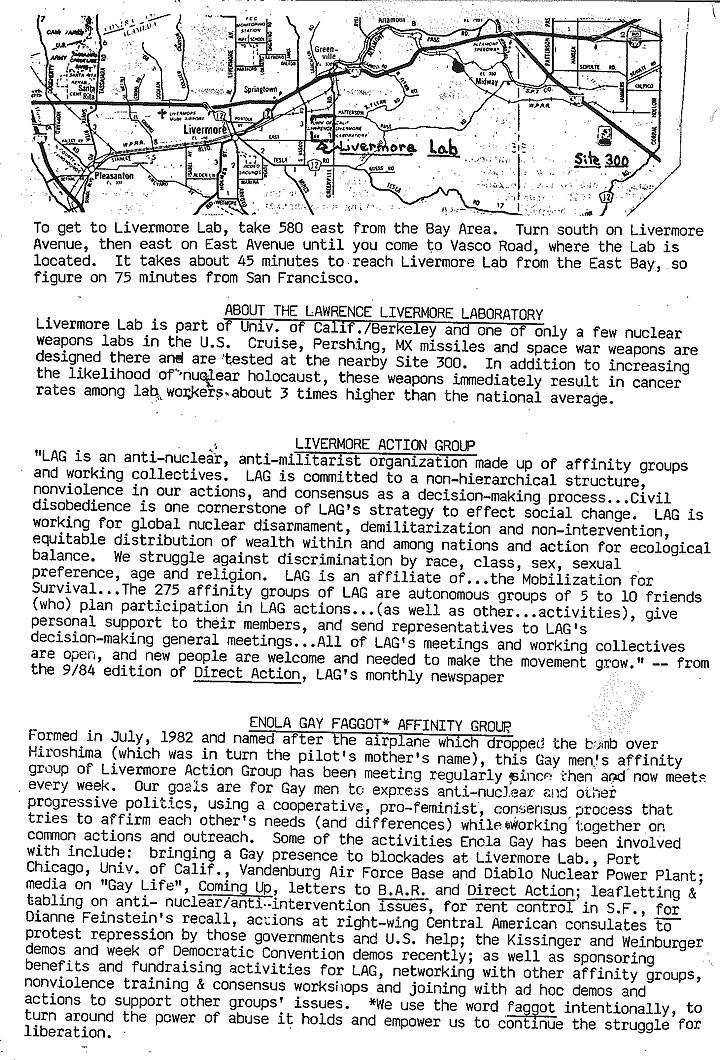 Back side of Enola Gay flyer at September 1984 action.