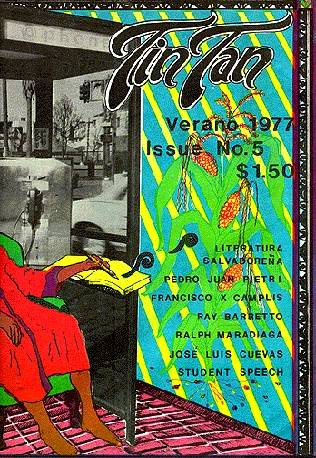 With the Sexto Sol Conference, the Pocho-Che poet rebels regrouped with others and launched the first and possibly last attempt at re-figuring La Mission as a Green Center.

Alejandro and Roberto had met with Stanford University supporters, Fernando Alegra and Jean Franco, various student organizations headed by MECHA and had agreed to hold the Sexto Sol event at three sites during March 30, 31 and April 1: Stanford, San Francisco State and the Palace of Fine Arts in San Francisco overlooking the Golden Gate Bridge.

Sexto Sol was a collective occasion of cultural cross-overs and political affirmations. Jazz riffs, dance and salsa music: two folklorico ballet groups, four political teatros, Teatro de Los Mascarones, Los Topos from Mexico City and Teatro Cena and Teatro de La Gente from the Bay Area. Among the critics were Carlos Monsivaisalso from Mexico City--and Jean Franco, Fernando Alegra and Arturo Madrid. Some of the Bay Area writers represented were poets such as Avotja, David Henderson, Carol Lee Sanchez, Dorinda Moreno, Natalia Rivas, Alejandro Murgua, Roberto Vargas, Nina Serrano, Victor Hernandez Cruz, Alurista and myself. Enriquetta Vasquez from New Mexico and Ricardo Sanchez from Texas stood up for the heartlands of the Southwest. There were also various music groups such as "Kafala" and "Spice"--sixty in total--inspired the moment. We were armed with a thick set of voices, tropical categories for our word and the prism of Red poetics. Did we have to choose one over the other, would we stray, continue into a more radical form?

Vitin (Hernandez-Cruz) Ariel and I split to Art Commission to visualize/flash on flyers for conference. Jos Ramos is a genius...We split to PO Box Vitin gets pan y salsa in the form of a royalty check -- smiles. Read my poem to him: "Oye poesa Vitin is smiling"..

In the Spring, as the days get closer to the conference time, in an entry without a date, Vargas writes about the final organizational stages at a planning meeting held at Alegra's house in Palo Alto:

he was Mart. This afternoon was work and wet weather then

The Sexto Sol was in the hands of the Mission poets, the Tropical vision was expanding, contracting, changing. The Latino Mission poets' writing practice flourished in the nexus of urban Santeria, Mexica-Chicano nationalism and a unique Bay Area international Tropicalismo. Murgua and Vargas as lead organizers of the Sexto Sol Festival upheld these notions with the emblem of El Sexto Sol, the Mexica new age of the Sixth Sun.

Poets on the outer rings of the Pocho-Che such as Nina Serrano followed the Sexto Sol call. Her "Sexto Sol" poem published in 1980 in her first book, Heart Songs, the last surge of the Pocho-Che Editions publication project beseeches the new Mexica age to appear.

During the Sexto Sol Conference I stayed at Murgua's and Vargas' house, a locale jokingly known as Huehuetitlan, House of the Elders. Mix a bowl of Ceviche, Mexican style-marinated fish, oysters, jalapeos, cheddar cheese squares, onions and crackers and wash it down with orange juice. We would wear pendeltons, bogart hats, khaki pants and a shredded bundle of poems, books and folders under our arms. At night we would hang out at Ceasar's Latin Club in North beach on Green Street. Mongo Santamaria played out the early conga slaps recorded in the Treat Street Fantasy Records studio.