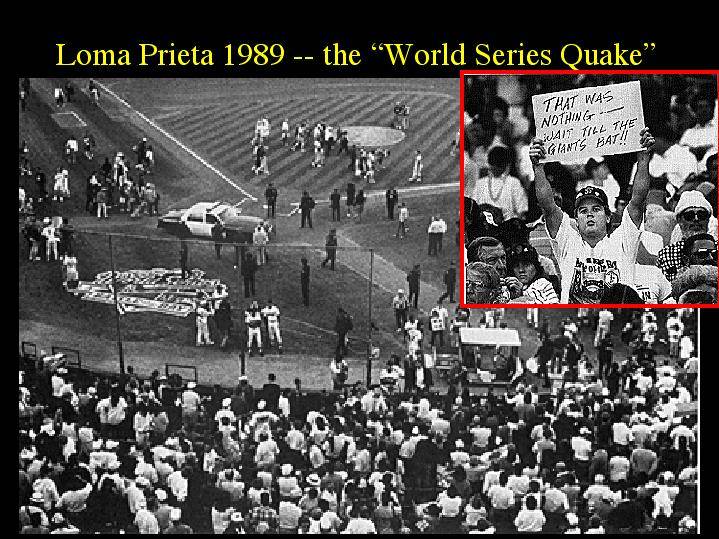 The Oakland Athletics and San Francisco Giants competed against one another in the World Series for the first time in 1989—but the Series would be remembered for a different reason. Shortly before the scheduled start of game three, the largest Bay Area earthquake since 1906 occurred. The game fortunately had reduced rush hour traffic, and the national media coverage was able to quickly shift from the Series to the earthquake. Yet the role of baseball in the disaster was not finished. After much debate, the World Series would resume in an attempt to re-establish normalcy.

In 1989, the two Bay Area baseball teams competed against one another in the World Series for the first time. The proximity of the Oakland Athletics and the San Francisco Giants created a rivalry, but many baseball fans believed that the Bay Area had already proven itself to the nation. As a national event, people across the country watched the A’s devastate the Giants in lopsided games one and two. However, with game three at Candlestick Park, the Giants were hopeful that a home field advantage would produce a win.(1) 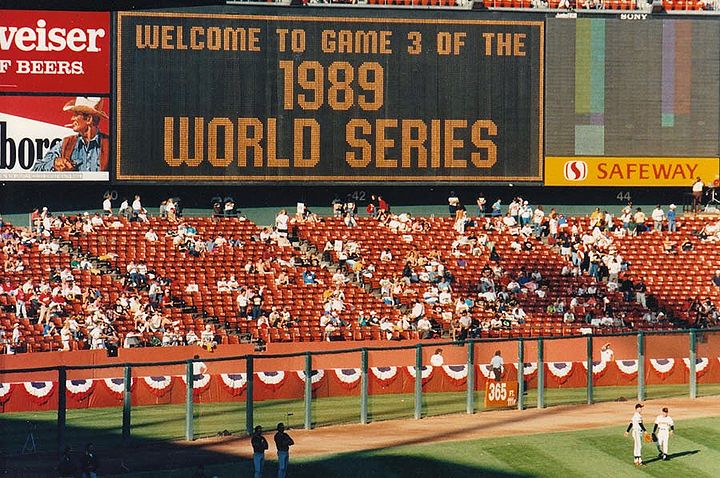 Candlestick Park just before Game 3 of the 1989 World Series.

Many San Franciscans left work early to watch the game on Tuesday, October 17th. As players stretched and the Goodyear blimp circled above, ABC began its pregame broadcast.(2) At 5:04 p.m., fans in the stadium felt a rumble, like the stomping of feet or a nearby aircraft. A hush quickly came over the crowd of over 60,000 fans, as the stadium shook for fifteen seconds.(3) When the earthquake ended, cheers erupted—out of relief and triumph over the earthquake.(4)

There was not an immediate sense of catastrophe in the stadium. A few pieces of concrete fell from expansion joints, but there were no serious injuries. In fact, most fans expected the game to continue once power was restored, and jokes were overheard, including, “Do we stage a pregame show here, or what?” and “Typical San Francisco, don’t you think? Someone got tired of it being a boring World Series and decided to shake it up.”(5)(6) Eventually, radios brought news of disaster, and Baseball Commissioner Fay Vincent used the bullhorn of a police car to postpone the game.(7) As fans exited the stadium, some stopped to pick up pieces of concrete, buy t-shirts, or send cards from the special post office.(8) Outside, a rising column of smoke offered a glimpse of the fires in the Marina, but fans were still in no hurry. They gathered to share food, drinks, and stories.(9)

For those beyond the stadium, the destruction was more apparent. At 5:04 p.m., fans watching the pregame show on television heard ABC announcer Al Michaels say, “We’re having an earth…” before static filled the screen.(10) In the short fifteen seconds that followed, spans of the Bay Bridge and Oakland’s Nimitz Freeway collapsed, and fires began in the Marina. Two smaller cities, Santa Cruz and Watsonville, were closest to the epicenter. Compared to the much larger San Francisco, more buildings were damaged in Santa Cruz and almost as many buildings become uninhabitable in Watsonville.(11) The earthquake may not have lasted long, but the damage was extensive in some communities.

The Role of the Media

The Loma Prieta earthquake was unlike any previous disaster. Not only did millions of Californians and an extraordinary number of journalists, in town for the World Series, feel the earthquake;(12) baseball fans across the nation learned about the disaster instantly. According to one study, due to the World Series, more people than usual were watching television or listening to the radio when the earthquake occurred, and when power outages disrupted media, most people sought alternative news sources.(13) The earthquake was “the first instantaneous media disaster event.”(14) Before a national audience, the catastrophe unfolded. 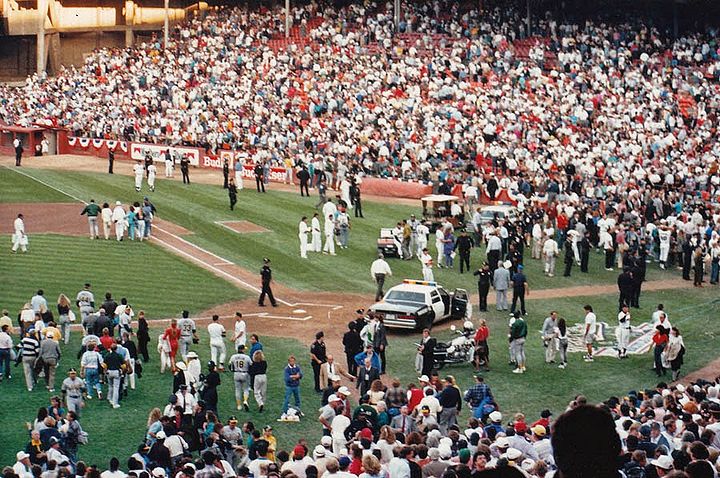 Players, staff, and fans minutes after the quake.

The live World Series broadcast enabled a quick shift to earthquake coverage. Sportswriters and columnists were transformed into reporters for the earthquake instantaneously, even providing coverage on ESPN, an all sports cable network.(15)(16) Meanwhile, the Goodyear blimp captain noticed helicopters swarming near the Bay Bridge, and soon, the blimp and these helicopters broadcasted live video of the fallen sections of the Bay Bridge and Nimitz Freeway and of the fires in the Marina.(17) The helicopters were in the air to report on the 5:00 p.m. rush hour traffic. Normally bumper-to-bumper, traffic was unusually light due to the World Series, likely saving hundreds of lives.(18)(19)

With the World Series suddenly forgotten, television coverage immediately defined three images that everyone would remember: the Bay Bridge failure, the Nimitz Freeway collapse, and the Marina fires. The focus on these events reveals flaws with the news coverage. While these images were visually powerful, they did not reflect the reality of the earthquake.(20) Television coverage gave the impression that San Francisco was destroyed. Yet the relative calm at Candlestick Park proves that many areas were mostly unscathed. Furthermore, especially in the first few days, reporters ignored badly damaged areas outside of the city or even just outside of Marina.(21)

There are many possible explanations: the reporters were mostly middle-class, whereas damage often occurred in low-income areas; these images were easier to photograph than dispersed damage; the total devastation of San Francisco by the 1906 earthquake was not forgotten; and the World Series had concentrated reporters in San Francisco. With pressing deadlines, newspaper writers followed the angle of television reporters and solidified the position of these sensational images as symbols of the earthquake.(22)

In general, media has significant social and political power, and the focus on San Francisco had effects on relief aid. To the despair of Santa Cruz and Watsonville residents, many referred to the event as the “San Francisco Earthquake” or the “World Series Earthquake.”(23) As recovery began, local politicians focused on San Francisco, and Santa Cruz, Watsonville, and poor-income neighborhoods were neglected.(24)

The day after the earthquake, Jim Trotter wrote, “What had been the central event of this particular time in the place where we live, the Battle of the Bay World Series, suddenly became irrelevant.”(25) Of course, he was correct to an extent; the nation was still focused on the earthquake. However, the World Series was not forgotten. Sports portions of television broadcasts and newspapers covered the debate between players, fans, officials, and residents: “We could play, but should we play?”(26)

On Wednesday, October 18th, Commissioner Vincent held news conferences by candlelight. Vincent acknowledged that the search for victims and recovery were priorities but refused to cancel the Series.(27) He believed that baseball was “just the thing to help us get on with our lives.”(28) Yet the next day, the frustrated San Francisco Mayor Art Agnos said, “I don’t give a damn about baseball. Why does everyone keep asking me about baseball?”(29)

Newspaper articles and editorials furthered the debate. One reporter criticized that a week was insufficient mourning for the dead, and another explored the feelings of obligation and guilt of the Giants and A’s players.(30)(31) Nonetheless, many insisted that the World Series would show that life continues after disaster and prove the city’s resiliency.(32)(33) Eventually, Mayor Agnos and most of the baseball players changed their minds; they could remember those lost while returning to everyday life, which included baseball.(34)

Carefully orchestrated to remember victims while celebrating life, the World Series continued on Friday, October 27th. A moment of silence at 5:04 p.m. was followed by the singing of the city’s unofficial anthem: Jeanette McDonald’s “San Francisco.”(35) Afterwards a group of heroes from the earthquake, including firefighters, doctors, and private citizens, collectively threw the ceremonial first ball.(36) Yet the excitement was restrained until, in the first inning, Giants’ pitcher Scott Garrelts threw a fastball that nearly hit A’s player Jose Canseco in the head. The drama drew the crowd into the game.(37)

The A’s swept the World Series, winning the third and fourth games. Nonetheless, there were no losers as the entire Bay Area celebrated the event.(38) As a symbolic act, the World Series helped victims recover and provided proof that life goes on.(39)