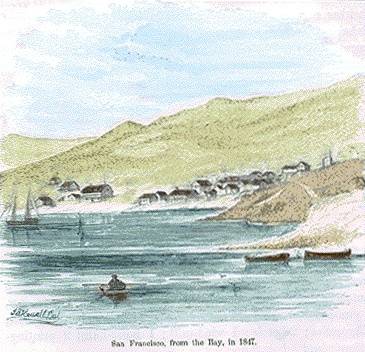 From the columns of these early papers we extract much curious information regarding the number and elements of the population of San Francisco in the latter part of June, 1847... Upwards of four-fifths of the whole population were under forty years of age; while more than one-half were between twenty and fortythe prime of life. Under twenty, the sexes were nearly equal in number; but above that age, the vast majority were males. These circumstances must be borne in mind when the reader considers the restless enterprise, energy and capability exhibited by the comparatively small population of the town. We have already alluded to the mixture of foreigners who settled in San Francisco. We now give the birthplaces of the white population (Shaping San Francisco comment: whites totaled 375, Indians numbered 34, Sandwich Islanders 40 and blacks 10 for a grand total of 459 in June of 1847): Born in the United States 228 ; in California, 38; other Mexican departments, 2; Canada, 5; Chile, 2; England, 22; France 3; Germany, 27; Ireland, 14; Scotland, 14; Switzerland, 6; at sea, 4; Denmark, Malta, New Holland, New Zealand Peru, Poland, Russia, Sandwich Islands, Sweden and West Indies, one each.