Drugs in the Gay Scene 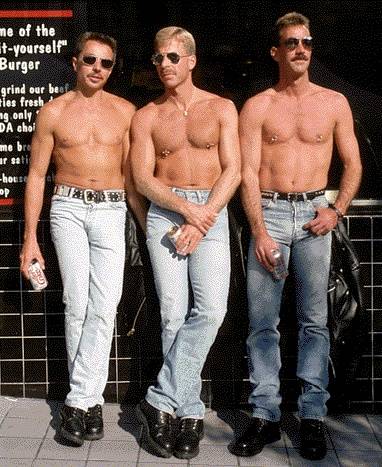 Drugs were part and parcel of the San Francisco experience, as well as the baby-boomer experience nationwide in the '70s. The variety of drugs becoming available was amazing. There was tremendous experimentation--mixing various proportions of various drugs in varying combinations, and often a willingness to try something new simply because it was, well, new. If the drug acted as an aphrodisiac or inhibition-reducing agent, so much the better. Rightfully, there was a feeling that the dominant culture was hypocritical in its drug use--after all, everyone's parents drank alcohol and took a wide range of prescription drugs.

JACK: This whole radical, revolutionary mentality, that we all had back then; and, you know, we were sex criminals, drug criminals, you know we were taking acid, smoking dope, taking whatever drugs we liked. "Fuck the law! Fuck the pigs!" You know. That was the whole attitude back then. We were sex criminals. And we didn't give a shit about law, tradition, or anything. We were creating a whole new world, and a whole new reality.

MARK: I do want to emphasize the shadow side of the scene. Drugs were so common. More and more people were coming, and doing drugs. It was like tumbling down this dark, rabbit hole, and some of us could integrate that into a daily life, whereas others got stuck down that hole.

DWAYNE: Especially in the heavy leather bathhouses, towards the time that they got shut down, they were mostly drug dens. It was very conducive to the kinds of things people were doing, but there was a lot of drugs. I remember at Animals, you could literally go up to the person running at the desk and say, "Okay, what room is the person selling in tonight?" And he'd go, "Oh, well, there's a store set up in room 12."

BILL: And what could you get there?

BILL: Oh. And they sold works, and everything?

DWAYNE: Much of the time.

DWAYNE: Yeah. It was very free. I mean, it was a little bit of a speakeasy atmosphere. You had to say, "I know so-and-so, and so it's okay to ask you if --", but it was not hard information to get. And so things are in that respect cleaned up a great deal, and things are much safer and in a positive way, things have come out of the corners. I hesitate to say "cleaner, better lit spaces," because it's not always desirable, but there is a cleaner feel to things.

BILL: One thing that I heard, in talking with some of the other guys about the sex club scene, or the bathhouse scene, in that era was that there really was a dark side that crept into it. Which I suppose was there all along, in terms of maybe people doing too many drugs, and that becoming a problem, and people not having limits or control over a situation. Did you witness a lot of that? Did that seem like it existed throughout?

JOSEPH: Yes. Very much so. What you're talking about there was later, as AIDS did come to be a familiar part of our lives, we were able to look back and see that much better than anyone really saw it when it was happening. And what we looked back and saw was this spectre, sort of, that had been among us. But I really, really believe that it was not there until very near the end of these few years we've called the Golden Age.

JOSEPH: I think by maybe '79, '80 is when that began. And I think it had more to do with the kinds of drugs that were available, and so forth. Because, as I suppose you could probably work it out from police blotters or something, but most of the drugs in the earlier part of that period were what I still would call "recreational" drugs. Psychedelics, mushrooms, hash a lot of hash. Hash was everywhere. I haven't seen hash for five years, at least, now, but it was everywhere then. And, of course, a lot of pot. A lot of it homegrown. Mescaline—lots of mescaline. That kind of stuff. And I didn't really see a lot of damage from it. I didn't see people dissipating from it, and I didn't see a lot of really inappropriate behavior. Of course, sometimes, some guy would freak out, or something. Somebody who cares has to take care of him, and get him out of there, or close him in a room with one person who will watch him, or whatever. That happened. But we didn't see that. I don't believe that these people you've talked to would have seen that as sort of the "dark side." The "dark side," to me, to the extent that it's about drugs, was about meth and crystal, that became very, very common at the very end of the '70s. And that before that, they were available, but they were in the disco circuit. They weren't normal drugs in the sex clubs, and I really hate to say this, and I hope it doesn't quite come out like this in print, but it was the dedicated fisters who brought what I consider the dangerous drugs into the sex club scene. Because, in effect, fisting, looked upon the way they looked at it, can become just as addictive as those drugs. And yet, in order to do it in that addictive way, you need the drugs. You understand what I'm saying.

BILL: They prop you up, they keep you awake.

JOSEPH: They also make you very willing to ignore pain which I would say you ought not to ignore. You know, the kinds of abrasive pain and stuff that come from overindulging in that kind of activity. But since the drugs were there then, and they were there physically in the club, you know, there were vials of meth and crystal and stuff, or ashtrays full of crystal, sitting in the room. And cocaine, in various forms, which I hadn't ever really considered so bad. But suddenly, in the presence of this other stuff, people went wild with the cocaine, too.