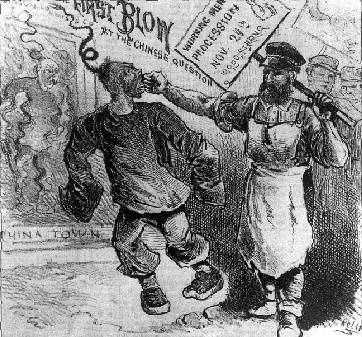 No immigrant group in San Francisco has suffered the abusive racism and violence that the Chinese have . . . This image is taken from an issue of The Wasp from the 1870s.

“Is this Chinese immigration desirable? I think not! In what capacity do they contribute to the advancement of American interests? Are they engaged in any thing that adds to the general wealth and importance of the country? Will they discard their clannish prepossessions, assimilate with us, buy of us, and respect us? Are they not so full of duplicity, prevarication and pagan prejudices, and so enervated and lazy that it is impossible for them to make true or estimable citizens? ... The Chinese are more objectionable than other foreigners because they refuse to have dealing or intercourse with us. Consequently there is no chance of making anything of them either in the way of trade or labor. They are ready to take all they can get from us but are not willing to give any thing in return. They did not aid in the acquisition or settlement of California and they do not intend to make it their future home. They will not become permanent citizens nor identify their lives and interests with the country. They neither build nor buy, nor invest capital...”