First published in "Power In Place," Race, Poverty & the Environment Vol. 21-1, 2016 under a Creative Commons nonprofit license. RP&E can be found online here.

“City College is a mirror for what is happening in the city,” says Kevine Boggess, a San Francisco community organizer and former CCSF student body president. “People are experiencing fear of being pushed out, or vanishing into the ether,” he says. Evictions increased in 2015 for the sixth year in a row,(1) as inequality in the city hit third-world levels.(2) The influx of personal wealth and investment capital has fed the housing crisis,(3) and transformed not only the face of the city, but the space as well. 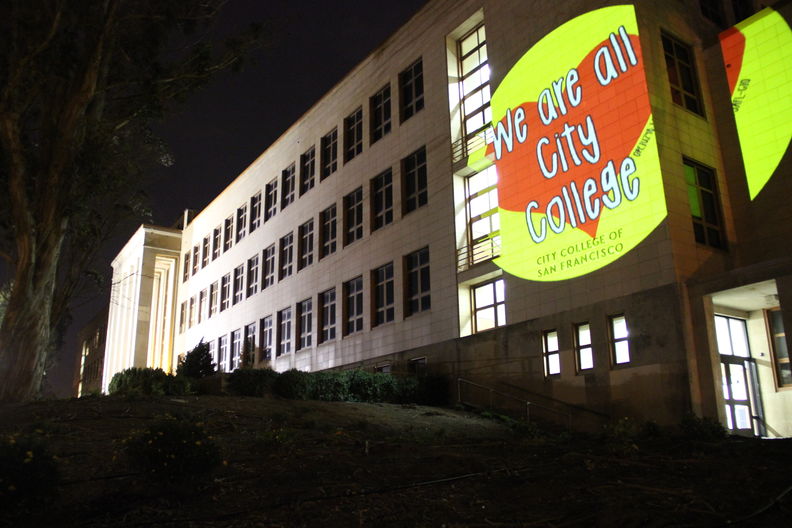 The changes show starkly in the neighborhood around City College’s Mission Campus. The corner stores, Hunt’s Donuts, El Mahahual Salvadoran/Colombian Restaurant, and the fabulous Latin@ drag bar “Esta Noche” up the street have all shut down, replaced by trendy watering holes and boutiques selling pricey home furnishings and clothes. As you head towards City College on the #49 bus, the upscale retail gives way to neighborhood businesses—but around the corner from the main Ocean Avenue campus, the Avalon condos just went up, with a Whole Foods next door.

“That’s another small metaphor for the reality,” says CCSF African American Studies Professor Aliyah Dunn-Salahuddin. “There’s new housing built up right near the school that the teachers can’t afford to live in, and a Whole Foods where students can’t afford to buy their lunch.”

The changes in the physical space that come as people are displaced are part of breaking communities, Fernando Marti of the Council of Community Housing Organizations observes. Communities lose all kinds of resources—cultural spaces, non-profits, stores. “The downsizing of City College fits that pattern,” Marti says.

When the crisis hit in 2012, City College had 12 campuses in neighborhoods around San Francisco, as well as an administration building at 33 Gough St.

As early as September 2012, the Board of Trustees began thinking about closing Downtown Campus and 33 Gough and leasing them to raise funds; students at Downtown spotted Interim Chancellor Pamila Fisher touring real estate investors through the building, according to Student Trustee Bouchra Simmons, who attends classes there. The Board did shut down the rented Castro-Valencia campus.(4)

“While the trustees were still suspended, they put 33 Gough St. out to bid to develop as housing. The Board of Trustees had no say in the project description,” says John Rizzo, one of the longest-serving trustees. “All these things happened while there was no public oversight.” The building—now in a prime location, since tech companies and million-dollar condos have come to Market Street—is being developed on a 75-year ground lease. Profits from the project will go to the developer and the bank that arranges financing, with a 6 percent commission for the real estate broker, CBRE,(5) and a cut for City College.

In October 2013, Special Trustee (emergency manager) Robert Agrella unilaterally canceled plans to build the Performing Arts Education Center (PAEC), although San Francisco voters had twice approved the project, and it was “shovel ready,” says longtime Music Department Chair Madeline Mueller. City College has no large auditorium, and only seven broken-down practice rooms for music students. The PAEC could both boost the school’s music and theater offerings, and serve as a performance venue and cultural anchor for the community, an alternative to the elite opera, ballet and symphony.

The site for the PAEC is part of the 17-acre Balboa Reservoir parcel; City College owns about 40 percent of the reservoir, and the San Francisco Public Utilities Commission (PUC) owns the rest. The PUC is considering declaring the land surplus, and San Francisco Mayor Ed Lee’s Office of Economic and Workforce Development has begun making development plans. The city has offered little hard information on the project, but in one scenario, only 15 percent of 500 planned housing units would be truly affordable for low-wage workers and new teachers.(6) City College activists hope to secure more affordable housing and a smaller footprint that would hold space for a revival of the PAEC, and preserve the parking at the site that hundreds of commuting faculty, staff and students rely on.

Since power was restored to the elected Board of Trustees in January 2016, development of 33 Gough St. and the closed Civic Center campus at 750 Eddy St. have been on the Board’s public agenda. But there, as in the Community Advisory Committee set up for the Balboa Reservoir, public input is tightly managed and purely advisory. The debate centers on whether public land should be used for private profit and luxury housing, with the lure of getting a bigger cut for the cash-strapped school. Any development the trustees decide on will need to go through San Francisco’s planning process, and ultimately be approved by the Board of Supervisors.