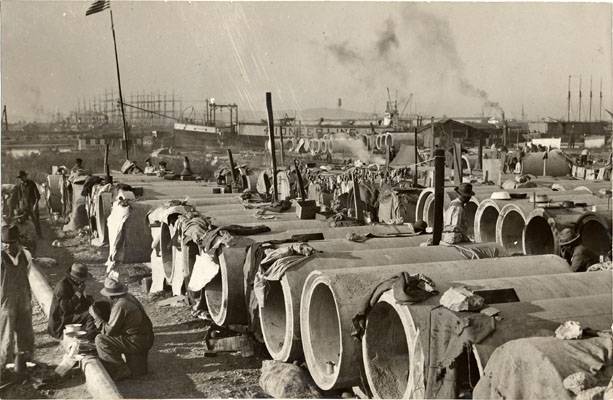 These water pipes were used as shelter by jobless people in 1932.

The stock market crash in 1929 changed the face of the country, turning thousands of men into desperate paupers, forced to take to the road in the hope of finding work. They hopped freight cars on the run. They called themselves “hoboes,” a classification quite apart from “tramp,” as an ex-hobo explained to me many years later. Wherever they got off, either by choice or as a result of being thrown out by the railroad cops, they scrabbled for work. If they were unlucky they knocked at doors asking for food.

The Southern Pacific Railroad yards were about a mile from our house. It was where trains were shunted and where hoboes could get on and off the cars. The tracks disappeared under an overpass at Paul Avenue and reappeared in Visitacion Valley. It was a natural site for the hobo camps, not far from a neighborhood of modest houses. From there they could knock on doors without fear of being driven away. We often were the object of a visit from a man looking for a meal. 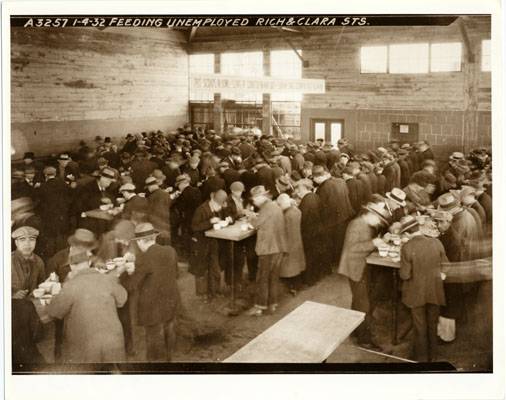 1932 soup kitchen in South of Market, at Rich & Clara Streets.

Our family was typical of the neighborhood: an immigrant family among other immigrants from Italy, France, Greece, Mexico, Russia, and in my parents’ case, from Turkey and Persia. We all lived in our own detached homes. Though actual cash was in short supply everyone ate well, depending on their ethnic cuisine. In our house my mother with five children to feed made sure to have plenty of food to go around. Many of the dishes—stews, stuffed grape leaves, tomatoes, bell peppers—required ground lamb which was done manually, in a metal grinder clamped to the table. Beans were plentiful and always pilav and yogurt. Fresh vegetables—sweet corn, zucchini, tomatoes,lettuce were supplied by local farmers who brought them around to the neighborhoods in their trucks. So whenever we answered the door to find a shabbily-clad man, sometimes bearded, asking if there was any food to spare, my mother was ready. A dish heaped with whatever was on the stove, together with bread, cutlery and a napkin, was given to one of us with instructions to hand over the food and leave him, to eat in privacy.

He ate outside, on the wide front porch, using the flat,wide rail as a table; he was never invited into the house, First, my father wasn’t home during the dinner hour; it was unheard of for a even a male friend of the family to visit when he wasn’t there. Then it was tacitly understood that the hobo would not be comfortable under the fixed scrutiny of the eyes of five curious children. And he might feel obligated to identify himself and explain how he came to be a hobo.

After he finished eating he would ring the doorbell and return the plate with profuse thanks and compliments for my mother. Then he’d leave. He never asked for money and none was offered. The underlying unexpressed feeling was that it would put him in the position of begging. Asking for food was not begging. It was a human being’s obligation to feed a hungry person. And, on our part, there was a deep feeling of satisfaction on having been able to satisfy someone’s hunger.

We often wondered if there was a mark somewhere on our property because these calls were not infrequent. Comparing today with how it was then with today's attitude towards strangers it is extraordinary that there was no fear.. Never did it occur to us that one of these strangers might do us harm and no harm was ever done.