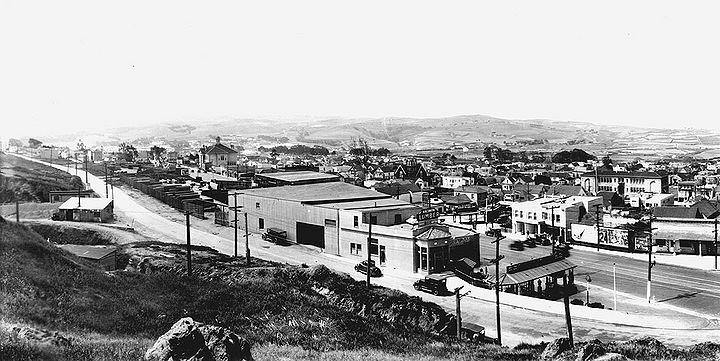 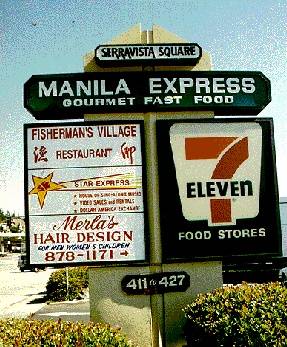 Manila Express, one of many Filipino stores in Daly City
Photo: James Sobredo

Fred Basconcillo, a retired member of the Iron Workers Union (AFL-CIO), sits by a large window in his Daly City home and describes himself as a "Filipino American." Born in the South of Market district in downtown San Francisco in the late 1930s, he grew up in the Fillmore District and has vivid memories of visiting the former "Manilatown" community on Kearny Street. Basconcillo eventually became the president of the Iron Workers Union and represented more than 40,000 iron workers from the Pacific west coast states. Today, as a "Lolo" (grandfather), he plays the role of a benevolent Filipino patriarch, helps in taking care of his grand-daughters, and drives them to school daily. Down the hill from Basconcillo's house is St. Francis Square, a mini-mall filled with Filipino delis, video shops, and grocery stores where one can shop for the latest cassette tapes, CDs and videos coming out of Manila. It also has Tito Rey's Restaurant, a very popular restaurant and nightclub for upscale Filipinos. Dining at Tito Rey's is just like dining at a fashionable Makati restaurant in Manila's financial district.

This is today's Daly City, the "New Filipinotown" and dubbed by Asianweek as the "Capital" of the Filipino American community. At 27 percent of the population (1990 census), Filipinos comprise the largest ethnic group in Daly City. It is home to the highest concentration of Filipinos in the United States and a sister city of Metro Manila's Quezon City. It is also a place where Filipinos can pick up several newspaper copies of the Philippine News, Manila Bulletin, Manila Mail, and the nationally distributed Filipinas Magazine. Filipinos can watch Philippine cable television broadcasts on The Filipino Channel, or on public broadcasts such as "Manila-Manila" TV, "Pinoy Pa Rin!", and the Manila weekly news program "TV Patrol." The "capitol" of this Filipinotown is Serramonte Mall, where nearly everyone you meet is a Filipino and speaks Tagalog, Visayan or Ilocano. Westlake Mall is another popular spot, which also holds a Filipino festival in June. But it is the restaurants and nightclubs that really give the flavor and beat to the New Filipinotown: restaurants such as Goldilocks, Three Bears, Manila Bay Express, and Manila Bay Cuisine, where you can eat chicken adobo, pancit noodles, beef kare-kare with bagoong, and halo-halo ice cream shakes and turon (fried bananas wrapped in crepes) for dessert; and restaurant/nightclubs such as Tito Rey's, Solita's, and Pinay's. On weekends after midnight, after an evening of dancing, Filipinos would form long lines outside the very popular Ling-nam restaurant on Gellert Square and endure a 20-minute wait for a late-night Filipino meal.

Incorporated as a city in 1911, Daly City citizens were worried of being swallowed up and incorporated into the expanding City of San Francisco. Named after John D. Daly, one of the City's original settlers and owner of the San Mateo Dairy, Daly City was nicknamed "the Gateway to the Peninsula." Originally settled by Irish immigrants, the City eventually became known for its numerous pig and dairy farms, as well as drinking saloons and gambling establishments. In the 1906 Earthquake, John Daly gained popularity when he donated dairy products and provided shelter to San Franciscans fleeing from the disaster.

After World War II, Daly City experienced a massive construction boom and suburbanization: the famed developer Henry Doelger built Westlake Mall and subdivision, and the brothers Carl and Fred Gellert built Serramonte Mall and subdivision. It was within this context that Filipinos moved into Daly City in the 1970s: the 1968 Civil Rights "fair housing" act was passed and affordable suburban homes were now available to Filipinos.

Filled with all the familiar reminders of their Filipino culture and lifestyle, Daly City is an ideal community for Filipinos. Breaking the stereotype of Filipinos as being complacent and apolitical, Filipinos had enough of a critical mass and political influence in the 1990s to elect a Filipino mayor. In 1995, Michael Guingona, a second-generation Filipino American and practicing attorney, became Daly City's first Filipino mayor.

Daly City is nationally known as the Filipino community in America. Right next door to Daly City's borders, however, lies the little-known Fort Funston Park, named after Col. Frederick Funston, the American soldier who captured Gen. Emilio Aguinaldo, who led the Philippine Revolutionary Army against the American military forces in the Philippine-American War (1899-1902). Today, while Fort Funston is a park known only to hang gliders, hikers, and dog walkers, Daly City is featured in the front pages of Asianweek as the "capital" of Filipino America and nationally recognized as the new "Filipinotown." 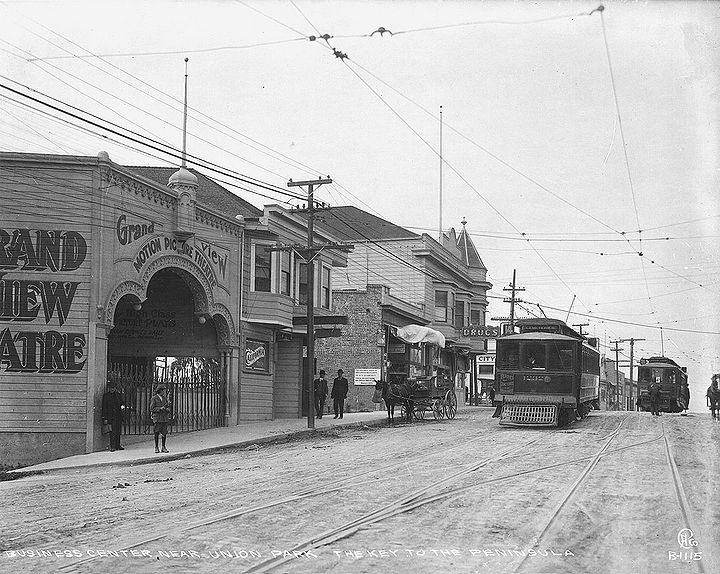 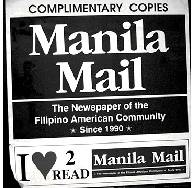