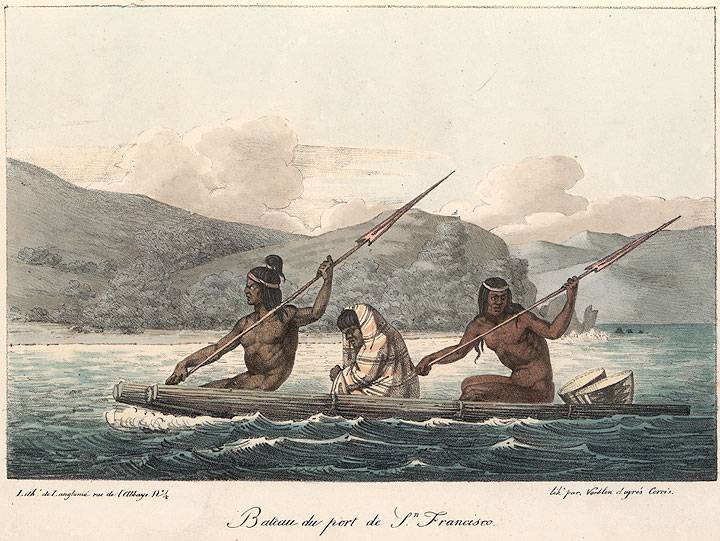 The Presidio's western cliffs have a timeless quality about them. They appear unmoved by the ocean crashing around them. Geological time is quite different from ours; in a staring match, humans blink before rocks do. Ten thousand years ago, a wink to a rock but an eternity to humans, the cliffs were more than thirty miles from the ocean. Sea level was approximately 100 meters below its present level. At the time of the last glacial maximum, the Sacramento-San Joaquin River flowed through the Golden Gate and emptied into the ocean beyond the Farallones. The land was probably covered with massive sand dunes far more extensive than the enormous dunes that so impressed early visitors. San Francisco Bay was not a bay but a complex of river valleys. (Atwater et al. 1977, Wells 1995)

As the climate warmed, sea level rose at a fairly rapid rate for several thousand years. Around eight thousand years ago, San Francisco Bay was reborn. These drastic sea-level changes have flooded the region at least four times, each time recreating the bay. Tidal marshes developed along its fringes, including the northern edge of the Presidio. These marshes, among the most productive ecosystems in California, nourished vast numbers of wildlife. Invertebrates fed in the mudflats and marshes, sharks and fish gobbled up invertebrates, birds feasted on both. There was room in the food web for grizzly bears and wolves. In the marshes farther southeast in what is now Montgomery Street downtown, an early resident of San Francisco would watch bears, wolves and coyotes quarreling over their prey. (Richardson n.d.) Other early visitors were astonished by the flocks of birds that settled into the marshes, so numerous that they darkened the sky as they landed.

The most abundant evidence of human habitation on the Presidio, not surprisingly, is from the tidal marshes along the bayshore. Midden sites there date from more than a thousand years ago; earlier evidence of human habitation of the Presidio may have been inundated by the rising sea. The bones reveal that the local inhabitants used numerous birds and mammals as well as nearly thirty fish and shark species.

The indigenous inhabitants of San Francisco used more than 150 different plant species in addition to dozens of animal species to provide for their needs. (Bocek 1984) Thoughtful management by the Yelamu* (* The descendants of the indigenous people of the Bay Area call themselves Ohlone, and their preference should be paramount. Following the careful scholarship of Randall Milliken, I use Yelamu here to refer to the approximately 160 people who inhabited several villages in the area now known as San Francisco. (Milliken 1995) They shared many close linguistic and cultural affinities with other indigenous peoples around San Francisco Bay, the Santa Cruz peninsula, and Monterey Bay. (I use the term Ohlone when referring to this larger cultural and linguistic group.)

They helped foster the abundant and diverse native plant communities on which they depended. Willows, for example, needed pruning to encourage the straight young poles preferred by basketweavers. Fire was perhaps their most potent management tool, as it prevented shrub encroachment on grasslands rich in edible bulbs and kept the landscape open for deer. (Anderson 1993) One visitor recorded fires while camping near Mission Dolores in late October 1816. All night, he wrote, great fires burned on the land at the back of the harbor; the natives are in the habit of burning the grass, to further its growth. (Chamisso 1816)

Centuries of such management had a dramatic effect on the landscape, but the changes were not immediately apparent to the Europeans who first visited Yelamu territory. The bounty of this managed landscape was currency in the first recorded exchange of gifts between the Spanish visitors and the Yelamu. On a March day in 1776 two Yelamu men visited the Spanish camp at [Water in the Presidio|Mountain Lake]] and brought firewood, probably harvested from live oaks. (Bolton 1931)

A few days later, when Juan Agustín Bautista de Anza selected a site for the future presidio or fort, he chose an open mesa with dramatic views in all directions. He was witnessing an inhabited landscape, kept open by the Yelamu to meet their need for diverse natural products. Without their fires, the flower-studded grasslands noted by Anza and his associates probably would have reverted to dense maritime chaparral dominated by ceanothus, blackberry, and poison oak. Several centuries without fire have enabled these scrub species to dominate the western bluffs of the Presidio, but when Father Pedro Font walked around the area with Anza during the spring of 1776, he recorded a very open mesa studded with an abundance of wild violets. Font had marveled at the plentiful wildflowers near his campsite on the shore of Mountain Lake. There are yerba buena and so many lilies, he wrote, that I had them almost inside my tent. (Bolton 1931)

This mesa of superlatives was the result of centuries of interaction between powerful natural and cultural processes. The deer and elk, the wind and fog, the willow pruning and fire starting; all had contributed to the very green and flower-covered mesa encountered by Font. (Bolton 1931) The panoramic views that Font considered so breathtaking are now blocked by buildings and trees.

A few months after Font and Anza departed, two Franciscan priests arrived in San Francisco to establish a mission and presidio. They traveled with a group of fourteen soldiers, seven settlers, an unknown number of women and children, and thirteen young Indian servants, including a California Indian from Monterey who spoke a language similar to the local peoples. (Milliken 1995) Traditional narratives of the Presidio glide over the cultural complexity of this moment of contact between peoples. According to the standard narrative, the sprawling Spanish empire engulfed all in its path, transforming the land and eliminating its native peoples forever; there is little evidence of indigenous people but graves, place names, and a few survivors.

Recent scholarship, in contrast, has emphasized the complexity of this period, the time of little choice for the indigenous people. The Spanish were actually in the minority, accompanied by mestizo and criollo (people of Spanish heritage born in Mexico) soldiers and settlers and indigenous Americans from other parts of Alta and Baja California. Even the pottery they brought with them displayed evidence of two centuries of cultural evolution in the Americas. (Department of the Army et al. 1996)

At first the Yelamu welcomed the newcomers with gifts gathered from the landscape. They continued to visit us frequently, Father Francisco Palu wrote of these early days, bringing us presents of small value, principally shellfish and grass seeds. (Milliken 1995) It wasn't long, though, before the Yelamu did not conform to Spanish expectations for a conquered people. Less than six months after Palu arrived in Yelamu territory, the hostilities began. All the eyewitness accounts of this time, though, were written by the ultimate victors, in this case Father Palu:

A few days later Spanish soldiers sought out and killed one of the Yelamu men who had threatened to fire an arrow. (Milliken 1995) Within just six months the visitors had demonstrated their superior firepower, and that they would use it in ways quite out of proportion to the original perceived offense.

To Yelamu youth, the material goods and military prowess of the Spanish must have been exciting and worthy of close study. Curious young men were among the first to embrace some aspects of mission culture. Almost exactly a year after the fathers arrived, they baptized three young men, including twenty-year-old Chamis, who, like the other two, had lost his father years before. Ten months later Chamis married the fourteen-year-old Paszm in the first Christian marriage ritual to take place in the Bay Area. (Milliken 1995) These details are important because the Yelamu and other California Indians of the period finally have names and lives of their own fathers, mothers, birthplaces, tribal affinities, weddings, births, and deaths. Palu, Font, and other Spanish chroniclers are well known, but Randall Milliken's careful work with mission records provides important context for understanding this time of initial contact between cultures and the tremendous social upheaval that followed. (Milliken 1995)

Within a few years, social relations had become quite complex among the Spanish fathers, mestizo soldiers and settlers, Baja Californians, recently converted Christian Indians, and those who remained outside the mission system. Some settlers coerced indigenous people into providing free labor. The mission fathers and soldiers would occasionally protect the local villagers from such depredations; at other times they would sponsor the coercion themselves. The development of an incipient agricultural economy was at the root of most conflict. Cattle owned by settlers would eat crops planted by Indians; cattle owned by Indians would trample fields planted by other Indians. But in perhaps the greatest transformation of the local food economy, the settlers cattle and row-crop agriculture had appropriated the land that had produced the huge variety of native plants on which the indigenous people had depended. In 1782, for example, less than six years after the Santa Clara mission was established, there were reports that cattle had dramatically altered the landscape:

They will have to rely for their food on the herbs and acorns they pick in the woods just as they used to do before we came. This source of food supply, we might add, is now scarcer than it used to be, owing to the cattle; and many a time the pagans living in the direction of the pueblo have complained to us about it. (Milliken 1995)

The complex interaction between nature and culture that had shaped the northern San Francisco landscape for at least a thousand years and probably much longer had been completely transformed in less than a decade.

[excerpted from "Seeing the Trees Through the Forest: Oaks and History in the Presidio" in Reclaiming San Francisco (San Francisco: City Lights Books, 1998) 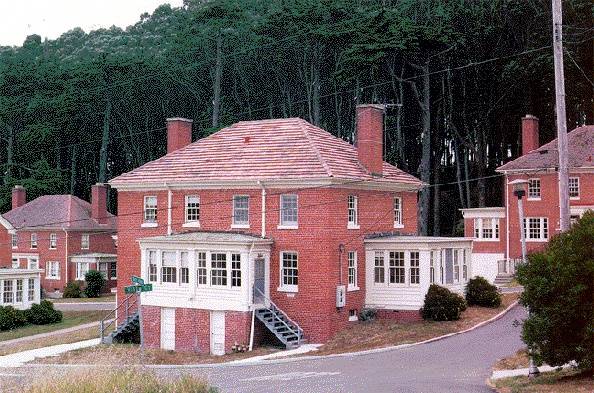