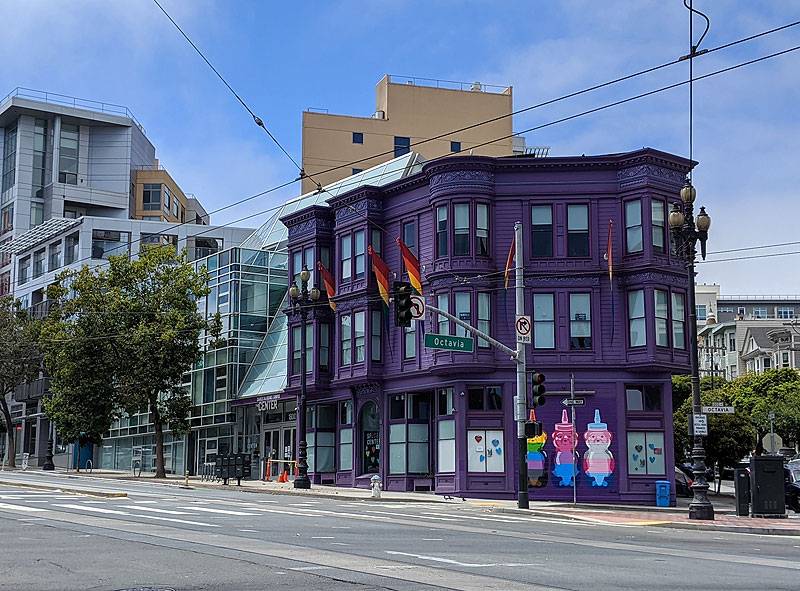 The SF LGBT Center, first opened in 2002, seen here in mid-2020 during the Covid-19 pandemic. In April 2017, the center inaugurated a state-of-the-art building—a $10.3 million remodel. This landmark event breathed new life into the physical space and created financial sustainability. Today, the SF LGBT Center is the only non-profit in San Francisco serving all members of the lesbian, gay, bisexual and transgender communities.

San Francisco attracted gay men and others with non-normative sexualities after World War II, but especially in the 1960s and 1970s as it became known as a city open to people who identified as gay.(1) Gay men and women grouped together, creating gay neighborhoods – places where they could seek safety in numbers, live an openly gay lifestyle, buy homes, and launch their own businesses. The Castro became one of the nation’s most distinctive and visible gay neighborhoods and a hub of sexual activism and politics. The Castro elected one of the nation’s first openly gay officials in 1978 when they chose Harvey Milk, a Castro resident, for the San Francisco Board of Supervisors. While Milk’s assassination cut his life and political influence short, gay San Franciscans organized political clubs, lobby groups, and other methods of applying political pressure within the city to define and protect gay rights.


The Castro and other gay San Francisco neighborhoods also provided a certain spatial freedom. Shops with gay owners, gay bars, and places of gay socialization lined the streets. Gay men opened bathhouses, leather bars, and sex clubs in the South of Market neighborhood, repurposing industrial spaces with cheap rents.(2) These neighborhoods permitted gay men, as Peter L. Stein, a film producer, describes, “to plant a rainbow flag in a neighborhood and stake a claim to it as their turf, where they could own businesses, buy property, elect their own officials, and walk down the street as a gay or lesbian person 24 hours a day.”(3) Dangers certainly existed – youth gangs attacked and threatened gay men, and police occasionally raided private gay establishments or arrested gay men on the streets.(4) However, despite these dangers, gay men could still be openly out throughout parts of the city, which allowed them to live a much freer and more open lifestyle in the Castro than they were able to in rural or small-town America.


These neighborhoods also offered gay men unprecedented access to relationships and sex. The map below shows a sampling of bars and bathhouses throughout 1980s San Francisco, with gay bars (purple dots) predominantly located in the Castro and Polk Valley areas, and bathhouses and sex clubs (blue and green dots) mainly found in the South of Market and Tenderloin neighborhoods. These areas offered abundant opportunities to meet other men – to chat over a drink, to date, to meet up for casual sex, or to start a long-term relationship. While gay men in big cities like San Francisco, New York City, and Vancouver used to meet in public places – parks, alleys, public restrooms – for sex, now multiple opportunities existed to do it in private or semi-private spaces – bathhouses, backrooms of bars, and residential parties.(5) Areas with a great concentration of bars and baths pointed to spaces where gay men could be particularly open with their identity and their sexuality. A critical mass of gay men within these locations allowed them to move through these areas with little (or, at least, less) fear for their safety.

Blue and green circles correspond to the locations of bathhouses and sex clubs and purple circles show gay bars and clubs within San Francisco. Other (red circles) refers to spaces like cinemas and bookstores. I drew the data from various sources including bathhouse inspection reports and bathhouse closure litigation, newspaper ads, and gay city directories. Click on items for more detail.

Before AIDS hit San Francisco, the Castro and its surrounding areas offered gay men unparalleled political, spatial, and sexual freedom. AIDS provided a dramatic turning point in San Francisco’s gay community. Many gay men turned toward monogamous relationships and safer sex, while experiencing intense fear of contagion and mourning for those lost to the disease. While the Castro changed dramatically with the coming of AIDS, it, in many ways, remained an open place for gay men. AIDS and the city’s (at times) clumsy responses to it provided a new avenue for political activism. New organizations like the Harvey Milk Gay Democratic Club, the Toklas Democrats, and People with AIDS championed issues of the disease, medical care, sexual education, and human rights. Sexually, the Castro and South of Market neighborhoods also remained open spaces. While some gay men turned to monogamous relationships or temporary celibacy, many men continued to pursue their sexuality at bathhouses, sex clubs, house parties, or other safe sex events. While the sexual atmosphere transformed radically, opportunities for sexual encounters still existed.(6)


Furthermore, the Castro remained spatially free – gay men could still walk the streets with pride. They still owned businesses in the Castro, and maintained the neighborhood’s openly and outwardly gay characteristics. While many of these men may have first reacted to the AIDS crisis with great fear and terror for how this would affect their own lives, eventually the community rallied from grief and with mutual support to help those in need. The Castro also provided a strong word-of-mouth basis for sharing educational materials, spreading medical news about AIDS, and advertising resources for those affected. From the first cases of Kaposi’s Sarcoma (or KS, what the earliest cases of AIDS were diagnosed as), community members and local businesses played a primary role in spreading information about the disease. For example, in the summer of 1981, Bobbi Campbell, San Francisco’s sixteenth official KS case, as well as a registered nurse and a Castro resident, worked to raise awareness of KS by posting photos of his lesions in the window of Star pharmacy in the Castro.(7) Because gay men lived so densely in this area and formed such a tightly knit community, news of AIDS and its resources often spread freely through these spaces. Spatial networks created in an age of sexual freedom enabled the swift passing of news and information in post-AIDS San Francisco.

Lindsey Passenger Wieck is a postdoctoral fellow at the University of Notre Dame.
Contact Lindsey